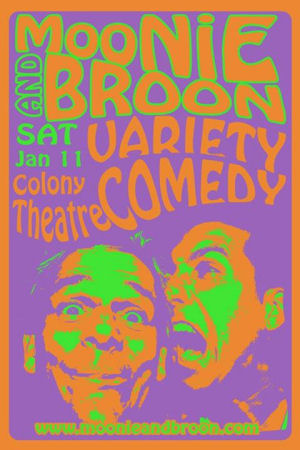 Most people don’t appreciate a good clown. They hear the word “clown”, and they instantly think of someone in whiteface, Emmet Kelley-style, who is out to eat them. But to me, the word “clown” conjures images of Red Skelton, a comic actor who just enjoyed the silly for the joy of being silly, and in doing so, brought laughter to the world. There are only a few clowns like that — masters of the art of being silly. We saw one of the last night.

Perhaps I should back up. For years, we have been going to the Renaissance Pleasure Faire. One of the performers we enjoy seeing there is MooNiE (Phillip Earl Johnson (FB)). MooNiE is a pure clown, loving the silly for the silly. He typically works Faire with his partner Broon (Brian Howard (FB)). Broon is more of the straight-man for MooNiE (in terms of setting things up and reacting), but is a physical comedian in his own right. Together, they form MooNiE and Broon (FB).  Recently, a friend of mine alerted me to the fact they were doing a show at The Colony Theatre (FB) in Burbank.  Although this was a rental gig for the Colony, here was a chance to see two performers we love in a venue we love to support. This was especially important, as MooNiE will not be at Southern RenFaire this year.  So last night saw us at the Colony, for what might be MooNiE’s last Southern California performance in 2014.

The show itself consisted of two acts. The first act began with some improvisation with both MooNiE and Broon. The opening improvisation was quite funny — these two play off of each other and amplify the signal and the silly. This was followed by Broon’s solo segment, which was primarily a straight-jacket escape with an audience member participating. The fun here was both the reaction (and playfullness) of both Broon and the audience member; however, the segment struck me as something done regularly. At the end, Broon announced it was time for intermission… but the house lights didn’t come up. Still, some audience members fell for that. MooNiE then came out, first carrying a big log across the stage, and then going into his usual ping-pong ball juggling routine that he commonly does at RenFaire. This gives him a chance to play with the silly. For both of these solo acts, even though you have quite likely seen them before, there is something about them that makes them timeless and still funny on repeated viewings. This may be the live audience factor — each performance is slightly different because of the audience reaction and interaction.

The second act, to me, was the stronger act. Although it may have incorporated elements of the RenFaire act (I believe the juggling with a human volunteer in the middle is part of the RenFaire act), the real heart of Act II was the improv. The bulk of the act was the two comics just improvising around the key bits in the act (the banana competition, juggling, the bed of nails). Some of this was based off of comments left by the audience during intermission (including some home-baked cookies from an audience member). This improvisation was hilarious and spectacular, and simply silly. It was amplified by numerous double entendres, and flights off into … various directions, mostly unpredictable. I think that’s one of the aspects that made the second act so funny — it was simply unpredictable and you didn’t know where they were going with the comic bits (indeed, you often got the impression that those on stage didn’t know either). This is comic talent — the ability to think on one’s feet. It is also what separates the improvisational clown from the comedian (who tells stories) and the comic actor (whose talent is timing and reaction). The power of two cannot be underemphasized: what made this act strong was the interplay between the two: one would go off in a direction and the other would follow, and then drag things kicking and screaming in a third or fourth or fifth direction. The clowning was strong, and reminded me of the improvisational masters: Skelton, the last Jonathan Winters, and Robin Williams. You just never knew what was going to happen, and that was great!

A few minor critical comments (although I hestitate to even bring it to the complaint level). First, MooNiE’s accent kept shifting around — sometimes it was midwest, sometimes much more distinctively London or even Cockney. The shifts, although playful, were slightly distracting. Second, I missed the usual announcements about cell phones and exits; it would have been interesting to see MooNiE and Broon’s take on the announcement to put away the phones or anything that lights up. At least no one attempted flash photography. I wouldn’t be surprised, however, to see segments from last night’s show up on YouTube (sigh).

I’ll note that MooNiE and Broon were supported by an excellent technical team; alas, there was no program so that I can’t identify them by name. Lighting was simple but effective, especially in the second act where the spot-equivalent operator seemed to be joining in the fun. Sound was mostly good, although (especially in the first act) the sound had a bit of a muffled quality too it. Set dressing was simple, and there were numerous props on the stage that were not used (and I’m guessing they were there in case the need to improvise with them hit them). MooNie and Broon were also supported by a, yet again, uncredited Merch team. The Colony provided a (yet again uncredited) house manager, who I’m guessing got to assist with the cleanup of the stage after the show — a thankless job.

Overall, this was a show worth seeing if you need a good laugh. Although Southern California won’t be seeing them again in 2014, there are two more opportunities: on January 18 for those in Northern California (Walnut Creek), and on January 25 for those in Illinois. Specific schedule info is here. During the show, MooNiE alluded to the show he’s doing in Chicago this spring (the one keeping him away from Southern): “The Dance of Death”. As he didn’t give a proper plug, here’s the specific information on the show, which is at The Writers Theatre in Glencoe, IL from April 1-July 20, 2014. MooNiE (Phillip Earl Johnson (FB)) will be playingthe innocent “Kurt”. If I was in the area, I’d go see it. I”ll note that The Writers Theatre does put their events on Goldstar.

A few other observations on the show. First, the audience at this show looked drastically different than the typical Colony audience. When we go for a subscription show, the audience is distinctly… ummm… grey and older. Alas, this is far too common for theatre audiences today. It is also more elegant and (umm) conventionally stylish. In constrast, the MooNiE and Broon audience was significantly younger, significantly more energetic, and (umm) rounder. It was great to see such a young audience at the Colony — and even more so as they were looking at the Colony’s displays of past shows, looking at the set pieces and awards, and picking up the literature (including subscription literature). This is just the audience the Colony needs to attract. That’s the good part of this rental — exposing the Colony to a new audience.

The bad part? The subscription information was for the 2013-2014 season that is drawing to a close (just two more shows). The Colony Theatre (FB) has just announced the 2014-2015 season, but didn’t have any publicity material out yet. In fact, they just sent the mailing about the season to the subscription base for renewals. So, for those MooNiE and Broon folks reading this, here’s the skinny on the upcoming Colony Season (as I happen to be both a MooNiE and Broon fan, as well as a Colony subscriber). Given I haven’t seen the press release yet, this may be a scoop. The season consists of 5 shows: (♦) “Family Planning” by Michelle Kholos Brooks (July 12-August 10, 2014), a comedy about putting a lot of relatives in the same space (stated as a World Premiere, although it was done by PRT in 2012); (♦) “What I Learned in Paris” by Pearl Cleage, a comedy about lovers in Atlanta in 1973 (West Coast Premiere); (♦) “Handle With Care” by Jason Odell Williams, a story about “love, fate, and the importance of GPS-enabled tracking devices” (West Coast Premiere); (♦) “The Road to Appomattox” by Catherine Bush, a drama about Lee’s final retreat to Appomattox (West Coast Premiere), and “Words by: Ira Gershwin & The Great American Songbook” by Joseph Vass (lyrics by Ira Gershwin, Music by Harold Arlen, Vernon Duke, Jerome Kern, Kurt Weill, and George Gershwin), a jukebox musical about Ira Gershwin (Los Angeles Premiere). Subscription prices run around $175 for the set of shows (at least for where we sit on a Saturday night). Subscription information for the current season is here; I suggest contacting the Box Office (boxoffice@colonytheatre.org) to be mailed information on the 2014-2015 season.

Dining Notes: We’ve been at a loss ever since Cafe Columbia closed last year. Last night, we tried Mi Latin Kitchen, hoping they had Ajiaco. Alas, they didn’t — and we weren’t that impressed with the menu or the service. We’ll likely go back to La Maria (although they don’t have Ajiaco either), and keep hunting for a new Columbian restaurant. Perhaps Sazon Columbia near us… at least they have it on the menu. El Meson Criollo in Van Nuys doesn’t; in fact, they appear to have the same menu as Mi Latin Kitchen.

Upcoming Theatre and Concerts:  Theatre performances for 2014 start next week on January 18 with “Mom’s Gift” at The Group Rep at the Lonny Chapman Theatre (FB) in North Hollywood. The following weekend, January 25, brings the first show of the REP East (FB) 10th season: “I Love You, You’re Perfect, Now Change“ (which we last saw at REP in 2006). February 1 brings  “Vanya and Sonya and Masha and Spike” at the Mark Taper Forum. February 8 will bring “Forever Plaid” at Cabrillo Music Theatre (FB). The following weekend, February 15, is being held for Lysistrata Jones at The Chance Theatre (FB) in Anaheim. The next weekend, February 22, is currently open (as Sutton Foster cancelled at the Broad). The last day of February sees us in Studio City at Two Roads Theatre for Tom Stoppard’s “The Real Thing“, followed the next evening by the MRJ Regional Man of the Year dinner at Temple Beth Hillel. March theatre starts with “Sex and Education” at The Colony Theatre (FB) on March 8. The weekend of March 15 is open, but will likely be taken up with Purim Schpiels (although I might do theatre on Sunday, March 16). March 22 is being held for “Harmony” at The Ahmanson Theatre (FB). March concludes with “Biloxi Blues” at REP East (FB) on March 29. April will start with “In The Heights” at Cabrillo Music Theatre (FB) on April 5, and should also bring “Tallest Tree” at the Mark Taper Forum, as well as the Southern California Renaissance Faire. As always, I’m keeping my eyes open for interesting productions mentioned on sites such as Bitter-Lemons, Musicals in LA and LA Stage Times, as well as productions I see on Goldstar, LA Stage Tix, Plays411.

One Reply to “Clowning Around”