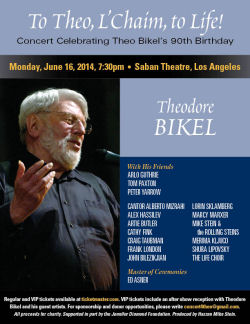 If you haven’t figured it out by now, I like Tom Paxton and Peter, Paul, and Mary. I’ve loved folk music all my life. So when Tom Paxton (or his proxy) posted on Facebook that Tom was participating in a special celebration of Theodore Bikel‘s 90th birthday at a theatre in Beverly Hills, I was intrigued. When I later learned that the program would include Peter Yarrow and Arlo Guthrie would be on the bill… and that tickets were on Goldstar… I was sold (even though it was a Monday night). So last night, after a long weekend, saw us in Beverly Hills for a even longer night — celebrating the legacy of 90 years of Theodore Bikel.

Now, if you are not familiar with Theodore Bikel… read his biography! Bikel has been a movie, TV, and a theatre actor for years. He was Tevye in Fiddler, the Captain in the original stage Sound of Music, and has had many more roles. He’s also been at the forefront of the battle to save Jews in the Soviet Union, fighting for the poor and oppressed, …. including many actors while he’s helmed the Actors Fund and Actors Equity. This is a man beloved by all. Most people — including me — have a number of his Jewish and Yiddish folk music records.

The show itself was spectacular. The master of ceremonies was Ed Asner, who was more crotchety than usual. The musical acts were varied: each group performed 2-3 songs. The acts included:

Combine this with an audience featuring notable actors and actors organization executives, and you could just feel the power in the room.

I didn’t try to write a set list, but here is some of what I remember:

The evening concluded with everyone joining in “We Shall Overcome”.  It was truly a memorable evening — well worth staying up for.

Upcoming Theatre and Concerts:  This coming weekend brings Solopalooza, a fund raiser for REP East on Saturday night, followed by  “Stoneface: The Rise and Fall of Buster Keaton” at the Pasadena Playhouse (FB) on Sunday. The last weekend in June brings  “I’m Not Just a Comic Genius” at Secret Rose (FB) on June 27. July will be busy: “Ghost” at the Pantages (FB) on 7/5, “Return to the Forbidden Planet” at REP East (FB) the weekend of 7/12, “Once” at the Pantages (FB) on 7/19, “Bye Bye Birdie” at Cabrillo Music Theatre (FB) on 7/26, and “Family Planning” at The Colony Theatre (FB) on 8/2. August then remains quiet as we work around vacations and such (but I’m eyeing a number of productions in Escondido, including “Two Gentlemen of Verona” at the Old Globe, and “Pageant” at the Cygnet in Old Town. What they have at the Welk (“Oklahoma“), Patio Theatre (“Fiddler on the Roof“), and Moonlight Stage (“My Fair Lady“) are all retreads. Things start to get busy again in September and October, with “The Great Gatsby” at REP, “What I Learned in Paris” at the Colony, and “Pippin” at the Pantages. More on that later. As always, I’m keeping my eyes open for interesting productions mentioned on sites such as Bitter-Lemons, and Musicals in LA, as well as productions I see on Goldstar, LA Stage Tix, Plays411.

One Reply to “A Night to Remember”