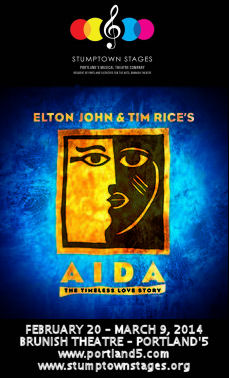 I have a timeless love. It is a love for theatre. This love is so strong that even when I’m in a strange city looking at potential hotels for a conference, I make time to go to the theatre. This weekend, I’m in Portland Oregon. So guess what I did last night. Yup. I went to the theatre. Specifically, we went to the Portland’5 Center For The Arts (FB), Brunish Theatre, to see Stumptown Stages‘ (FB) production of “Elton John and Tim Rice’s Aida“.  Short summary: This is a production well worth seeing if you are in the area.

First, a word about this oddly named Portland’5 theatre. It is a collection of 5 theatres, the Schnitzer, Winningstad, Keller, Newmark, and Brunish. When we were there, there was a symphony concert in the Schnitzer, ballet at the Keller, and (as part of the Portland Jazz Festival), Buster Williams was at the Newmark and the Toshiko Akiyoshi Trio was at the Winningstad.  The Brunish, where we were, is a 150-seat black box theatre at the top of the facility with no fly space, set up with a thrust stage. There are three risers of seats — two on the sides, one in front. We were sitting on the side, stage left. The theatre was very easy to get to — one block from our hotel.

Now, on to the show itself. “Elton John and Tim Rice’s Aida” is a conventional musical based on Giuseppe Verdi‘s opera “Aida“. More precisely, it is based on a children’s storybook version of Verdi’s opera written by the soprano Leontyne Price. The property was acquired by Disney Theatricals as a followup project for Elton John (music) and Tim Rice (lyrics) after the success of “The Lion King” on Broadway. The book for the musical was developed by Linda Woolverton and Robert Falls, and the show ran on Broadway for four years starting in 2000, and won numerous Tony awards. Some changes to the book by David Henry Hwang were made for the non-Equity tour, and this is the version that was licensed and is presented by Stumptown on the Brunish stage (although I couldn’t see all of Hwang’s changes in the Stumptown Stages version).

As in the opera, the basic story concerns a Nubian princess, Aida and the Egyptian captain, Radames, who captures her on a naval expedition up the Nile. He brings her back home and gives her as a slave to his betrothed, Amneris. However, during this process, Aida and Radames start falling in love, and this process continues after Radames returns home. In fact, it intensifies as Radames’s father, Zoser, has been secretly plotting to acquire power by poisoning the Pharaoh, and accelerating Radames’s marriage to Amneris. Radames is pulled off of his navel duty. After Aida’s father, the Nubian king Amonasro is captured the situation is brought to the breaking point. He forbids Aida from seeing or loving Radames; Aida disobeys and Amneris discovers the relationship. There is an escape attempt by the King and Aida, and the King is allowed to escape. However, Aida and Raames are captured, and are sentenced to be put to death by being buried alive, together, for eternity.

Pretty upbeat stuff for a Disney musical, right?  Actually, no, although it is a perfect tragedy for the opera world. Disney addressed the tragedy by wrapping this story with an opening scene that takes place in an art museum of Egyptian artifacts, including a statue of Amneris. Two of the unnamed art students bear a striking resemblance to Radames and Aida. After these two students sit down and look at each other, the statue of Amneris comes to life and tells the story of Aida. At the end of the story, it is noted that Radames and Aida’s love is so timeless it will live on forever as an enchantment in future reincarnations of Radames and Aida. The first scene is then repeated, but with much more knowing looks, and implied meaning, between the Radames and Aida dopplegangers.

The story is also made more upbeat through the music of Sir Elton, which features a mixture of pop-style tunes, Motown, gospel, and African-inspired songs. I’ve had the album for a while, and a number of the songs a like quite a bit. Other songs I think I’ve grown to appreciate more as result of this production, now that I understand their staging and part of the story.

Let’s turn to this production itself. Overall, it was very good. The director, Kirk Mouser (FB) (assisted by Terry D. Kester) did a good job of bringing out the emotion and feeling in the cast, and working with them to convey the story. Where the direction was a little weak was in remembering that the production was on a thrust stage. The performances were great for those looking straight-on to the stage and those sitting on stage right. Those of us on stage left were often to the back of the voices. A thrust stage requires the director to remember to move the actors to play somewhat equally to both sides. My suggestion, if you can pick your seats, is to take this into mind.

The performances themselves were very very strong. You can see some pictures from the production here. In the lead position was Joann Coleman (FB) as Aida. Coleman gave a very moving performance, and had a loving and reasonably strong singing voice. The emotions that she exhibited and brought out were great, and she was just stunning in songs like the “The Gods Love Nubia”. Supporting her were James Langston Drake (FB) as Radames and Joy Martin (FB) as Amneris. Drake exhibited the requisite strength and tenderness, and had a lovely tenor voice that was shown in numbers like “Fortune Favors the Brave” and in duets with Aida. Martin’s Amneris was also strong; she exhibited the humor that the character requires, and was great in her signature number “My Strongest Suit”. All three could have benefited from a tad more power in their belt, although that could have been an artifact of my stage left seats or (and I suspect more likely) a fault of the sound engineer and the microphone placement.

In the second tier of named performers were Kurt Raimer as Zoser, Jeremy Sloan (FB) as Pharaoh, Antonio Tillman (FB) as Mereb, Terence Kelley (FB) as Amonasro, and Lydia Fleming as Nehbka. Of these performers, I was very impressed with Raimer’s Zoser. Although again he could use a little more power, I found him wonderful in his two numbers “Another Pyramid” and “Like Father Like Son”. Also strong was Tillman’s Mereb, who did a great job of conveying emotion and tenderness. Lastly, I was impressed by Fleming’s powerful voice which shone through from the chorus in “The Gods Love Nubia”.

Supporting the performance side was the choreography of Valarie Grudier Edwards  and a number of instructors on the Stumptown Stages Staff. The choreography worked well for the space, but at times I wondered about the movement of some of the background dancers (especially during the songs of Kurt Raimer as Zoser). I do with the Stumptown vocal instructor, Douglas Weber/FB, had brought out a bit more of the rock voices for the main characters — the roles called for that strength and power and (for whatever reason) it was only about 80% there).

Technically the production was mostly very strong. The scenic design by Joseph Benz utilized the space well with simple major set items and a basic Egyptian arch; it might have benefits from some projections on the backdrop to establish place a little more. But that’s only a minor quibble. Costumes (designed by Janet Mouser) were also good, modulo a few problematic areas (such as Radames wearing a watch during the opening number, one skirt falling off during a dance (she had shorts underneath, or it would have been a very different show), and quite a few visible bra straps). Brian Moen‘s sound design worked reasonably well, although it could have used a bit more amplification to support the rock belt a bit more. The lighting by Phil McBeth was effective at establishing mood. The production was stage managed by Joshua E. Strickler, assisted by Emma Lewis.  Other technical credits: Raquel Calderon (Wardrobe Assistant), Paul Fardig (Photographer), Kathy Lippincott (Costume Crew), Abby Marten (Playbill Design), Andrea Nelsen (Communications Director), Jennifer Olson (Social Media Manager), Lynn Redshaw (Sound Assistant), Bruce Tolonen (Prop Master), Sandra Vicent (Make-Up Designer/House Manager), and Stacee Waples (Wardrobe Mistress). Stumptown stages is under the artistic direction of Kirk Mouser and Julianne R. Johnson-Weiss.

The Stumptown Stages (FB) production of “Elton John and Tim Rice’s Aida” continues at the Portland’5 Center For The Arts (FB) through March 9. Tickets are available through the Portland’5 online box office as well as (possibly) through Goldstar (although right now they are sold out).

Upcoming Theatre and Concerts:  The last weekend of February was going to start with Tom Stoppard’s “The Real Thing” at Two Roads Theatre, but the problematic reviews (decidedly mixed reviews on the performances, and nearly unanamous reviews that the show was too long and had too many long scene changes) led me to cancel it and replace it with Larry Shue’s “The Foreigner” at Crown City Theatre (FB). The next evening brings the MRJ Regional Man of the Year dinner at Temple Beth Hillel, followed by “Sex and Education” at The Colony Theatre (FB) on Sunday March 2 (moved from March 8). The weekend of March 8 now brings “Biloxi Blues” at REP East (FB) (moved from March 29). The weekend of March 16 brings Purim Schpiels, with Sunday afternoon bringing “Inherit the Wind” at the Grove Theatre Center (FB) in Burbank. March 22 brings “Harmony” at The Ahmanson Theatre (FB), followed by “Author, Author: An Evening with Sholom Aleichem” at the Santa Monica Playhouse (FB) on March 23. The last weekend of March is open, and will likely stay that way as we’ll be exhausted. April starts with “In The Heights” at Cabrillo Music Theatre (FB) on April 5, and should also bring “Tallest Tree” at the Mark Taper Forum, as well as the Southern California Renaissance Faire. April may also bring “My Name is Asher Lev” at the Fountain Theatre (FB) (as this runs through April 19). Current planning for May shows “The Lion in Winter” at The Colony Theatre (FB), and “Cat on a Hot Tin Roof” at REP East (FB). As always, I’m keeping my eyes open for interesting productions mentioned on sites such as Bitter-Lemons, and Musicals in LA, as well as productions I see on Goldstar, LA Stage Tix, Plays411.