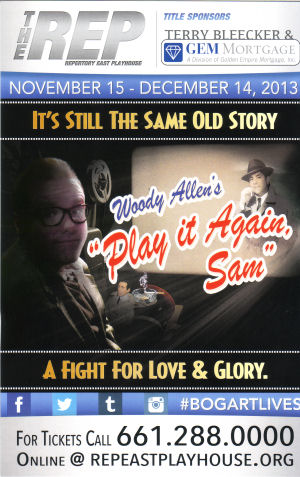 This has been a busy live entertainment weekend: a folksinging legend Friday night, the Virgin Mary and a miracle this afternoon, and sandwiched between them: a nebbish New Yorker trying to find a relationship. Specifically, last night we were in Newhall for the final show in Repertory East’s 9th season: “Woody Allen’s ”Play It Again, Sam” “.

“Play It Again, Sam“, before it was the 1972 film, was a 1969 Broadway comedy by Woody Allen. The story is basically the same, although it takes place in New York. Allan Felix, a nervous nebbish New Yorker who watches and writes about film for a living, has just been dumped by his wife, Nancy. Linda, the wife of Allan’s best friend Dick, keeps trying to fix Allan up with various friends. Nothing works, because Allan is so scared of women that the persona he adopts overdoes it and scares them away. It doesn’t help that he still hasn’t let go of the memory of his ex-wife (who keeps belittling him in his mind), and imagines romances as if life was Casablanca — to the point of taking relationship advice from an imaginary Bogart. In the process of trying to find the right girl, Allan keeps spending time with Linda. Linda, in turn, becomes charmed with Allan’s real persona; this is helped by the fact that Dick is too focused on business (a running joke is that he is constantly calling his office to leave the number he is at — ah, pre-cell-phone days). Eventually, Linda and Allan fall for each other. Will she have an affair and leave Dick? C’mon, this is Woody Allen, so you likely can guess the answer. At the end of the play, a neighbor comes over, and she and Allan seem to hit it off.

There are some comedy styles that you either love or are just lukewarm towards. Jerry Lewis is one of them. Woody Allen is another. Some love Allen’s nebbish New Yorker persona (very often, New Yorkers themselves). Others don’t see the appeal in the style. Alas, I’m in the latter camp — the only Allen movie I’ve liked at all was Annie Hall, and that was a bit more Los Angeles based. I’m just not into the self-deprecating, down-on-yourself annoying persona that Allen adopts. So the story here did not grab me as others might. This is not a fault of REP, for there are many that love Woody Allen. It also doesn’t help that I’m not a big movie fan — in particular, I’m not a big Bogart fan, and have never seen Casablanca. There were likely numerous movie references to films from that ever that went completely past me. Still, there were humorous points in the play and the acting kept me entertained. More on that in a minute.

One major problem with the play is that it reflects a very warped attitude towards women — one that is uncomfortable today, but was all too prevalent when the play was written. This can be seen in the continual advice from Bogart to slap women around. It can be seen in Allan’s focus on finding a women primarily for the sex. Where it is most troubling is in the scene where Allan and Linda discuss the possibility of rape, and Allen (the author) puts words in Linda’s mouth about potentially wanting rape, if it was with the right man. This is absolutely the wrong message to be sending (and it may be a subconscious reflection of Woody Allen’s attitude towards women, as seen in his subsequent relationships).

When you get past the Woody Allen character, there are a number of things to like about this play. It does send a good message about the façades we put up scaring away people: often, we put on a persona about the people we think we want, and this scares away the people we need. That’s a good message to be sending. It also sends a message about what an over-focus on business and being connected can do to a relationship. We see this in the relationship between Dick and Linda, who are growing apart because of Dick’s over-focus on work and under-focus on his wife. By the end of the play, Dick has been reminded of the importance of Linda in his life, and that his sole attention cannot be work, work, work.

Then there is the “movie message.” Allan Felix is a man who lives and breathes old movies: he writes about them, he watches them, he memorizes them. They are his obsession, and in many ways they drive his perception of what a man should be and how a man should behave. This is seen through the focus on Bogart, through the movie posters, through the melodramatic ways Allan fantasizes that situations will play out. This is ultimately exposed as being unhealthy — what is healthy is to just be yourself and to attract people through you.

Patrick Rogers (FB), as Allan Felix, does a good job of channeling Woody Allen — he captures the neurotic behavior, the voice, and the mannerisms quite well. Performance-wise, he nails it. In fact, he captures it so well that — if you’re like me and not a fan of the Allen persona — you can’t see what women would like about this man. However, if you can get past the Woody Allen schtick, he does have a number of funny lines. Allen (the author) does know how to write good jokes, and you’ll find yourself laughing at them even if the persona annoys you.

Another wonderful performance — perhaps even stronger performance — was given by Jessica Kaye Temple (FB) as Linda Christie.  She was sweet, she was cute, she was playful, she was sexy in a 1960s-repressed way, … she was just a delight to watch.  Your eye was drawn to her whenever she was one the stage. We’ve seen her before on the REP stage, and it is just a joy to see her again. Playing her husband, Dick, was Gregor Manns (FB). Manns gave a good performance as the man more focused on business; however, the attempt at modern casting was a bit jarring in the historical period of the show. It ended up working because of Manns’ skills.

Rounding out the cast were Bonnie He (FB) [Dream Sharon, Barbara], Lara Hughes (FB) [Nancy, Gina], Jason J. Lewis (FB) [Humphrey Bogart], and Kaitie Ty Warren (FB) [Sharon, Vanessa, Go-Go, Intell’l Girl]. A few notes here. Lewis channeled Bogart very well — or to be more accurate — he presented the expected caricature of Bogart, as the actor was probably not always his Casablanca persona. He, although not on stage much, is always fun to watch. I have to wonder if the ending of the play involving her was tacked on — according to Wikipedia it was not in the movie version, and it just felt too conveniently “feel good”. Ah well, it was early Woody Allen.

For the most part, the direction by Marlowe Weisman (FB) (assisted by Janice Crow-Christensen/FB) was good. There were a few pronunciations that weren’t New York (I caught chiropodist, which is not pronounced like chiro-practor, and our friends caught another)… but in general the movement, positioning, and mannerisms worked well.

The technical team was a little bit different this time. Sets were designed by Madison Orgill (FB), with properties by Danielle Honeyman/FB. These worked very well at establishing the place — I appreciated the period magazines, as well as the period Lays potato chip bag. Additional props were by Amy Ganyo. Costumes were designed by Janet McAnany/FB, and (at least to my eye) seemed appropriately period. As always, the lighting design was by Tim Christianson/FB, and the sound design was by Steven “Nanook” Burkholder/FB.  Taylor Kozlowski/FB was the stage manager, and Marie-Claire Erdynast/FB was the production stage manager. The show was produced by Mikee Schwinn/FB and Ovington Michael Owston/FB.

Upcoming Theatre and Concerts:  This afternoon brings the rescheduled “Miracle on S. Division Street” at the Colony Theatre (FB). Thanksgiving weekend brings “Falling“ at Rogue Machine on Sat November 30, and may also bring the concert “There’s No Place Like Home for the Holidays” at REP East (FB) on Sunday December 1 [I’m unsure about this — on the one hand, it supports REP East… but on the other hand, it’s Christmas music]. December will start with “The Little Mermaid” at Nobel Middle School on Friday, December 6. We then leave for New Orleans and the Annual Computer Security Applications Conference (ACSAC). When we return we have an interesting play, “Sherlock Through the Looking Glass“, at the Odyssey Theatre Ensemble (FB). December, as currently scheduled for theatre, concludes with “Peter and the Starcatcher” at The Ahmanson Theatre (FB). Of course, there will be the traditional movie and Chinese Food on Christmas Day — right now, the two movie possibilities are “Saving Mr. Banks” opening December 13 (meaning we can use group discount tickets), or “The Secret Life of Walter Mitty” opening December 25. None of the other December releases look worth the money (I’d rather see “August: Osage County” on the stage, thankyouverymuch). Looking into January…. nothing is currently scheduled, but it will likely bring “I Love You, You’re Perfect, Now Change“, which is the first show of the REP East (FB) season, running 1/17 through 2/15/2014… and the end of the month will bring “Forever Plaid” at Cabrillo Music Theatre (FB). Of course, we look forward to seeing you at ACSAC for the wonderful training opportunities there. As always, I’m keeping my eyes open for interesting productions mentioned on sites such as Bitter-Lemons, Musicals in LA and LA Stage Times, as well as productions I see on Goldstar, LA Stage Tix, Plays411.

2 Replies to “Relationships in Therapy”