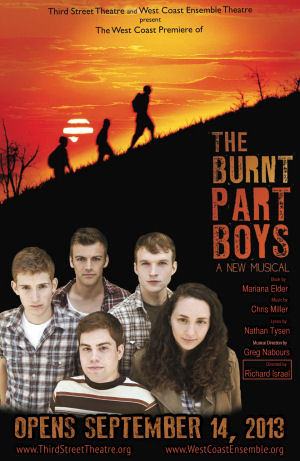 Journeys and hills. That’s a good characterization of yesterday. We journeyed  over a hill yesterday afternoon to celebrate the life journey of a friend that passed away. We then journeyed to West Los Angeles so that I could see another journey — this time, the journey of five friends up a mountain in West Virginia to the place where their fathers died. The latter, a newish Off-Broadway musical called “The Burnt Part Boys“, was making its West Coast premier at the Third Street Theatre (FB).

I had ordered the tickets to Burnt Part Boys about a month ago, having heard about the musical on one of the blogs I monitor, seen the music highly rated on Amazon, and based on my knowledge that the musical was bluegrass (one of the genres I like). I had only heard the music about a week ago, and liked what I heard.  It was the last in a series of new musicals I had seen over the last two months (bare, Carrie That Tune, and Ordinary Days being the others). But yesterday I wasn’t in the best shape for a musical — a migraine had started during the funeral and it crested about an hour before the show. Luckily the meds kicked in and it cleared about 10 minutes before the show started. I’m glad they did. This was a wonderful show that grabbed my attention and my heart, and the performances and story were the emotional journey that I needed.

The Burnt Part Boys (book by Mariana Elder, music by Chris Miller, and lyrics by Nathan Tysen) tells the story of two brothers — Jake and Pete — a coal mining family in in Pickaway WV in 1962. Their father, along with a number of other fathers from the community, had been working in the local coal mine when it collapsed and caught fire ten years prior (“the burnt part”). Since then, the older brother Jake had gone to work for the mining company, which is about to reopen the Burnt Part. When Pete discovers this news, he decides he can’t let this happen — the Burnt Part must remain closed in order to serve as a sanctuary to the men lost. Drawing inspiration from his heroes at The Alamo, he takes his brother’s mining equipment (i.e., dynamite) and goes off with his best friend, Dusty, to blow up the Burnt Part. Along their journey, they join up with a young women they knew from their school who had also lost her father on the Burnt Part. Meanwhile, Jake discovers the missing dynamite, and heads off with his best friend, Chet, to intercept his brother. Eventually these two groups meet, and decide to continue to the Burnt Part. Once there, Pete sneaks off and detonates the explosives, collapsing the mine and trapping them.

The focus of this story is the journey — or should I say journeys — that each of five young people take. Each is on a different journey of challenges and discovery, and both the journey to the mine, as well as the journey they take after the explosion, changes each in profound ways. It is a fascinating journey to watch, and the performances are such that you are just drawn into these characters. Using a relatively simple set and props, these actors make you believe they are in the West Virginia hills climbing up the mountain. The music serves as a nice augmentation to the book by showing the inner facets of the characters and the emotional journeys they take. Thankfully, this was not another sung-through musical (both bare and Ordinary Days were sung-through, and that trend is tiresome); the music works well here to establish the mood and address aspects of the character that normal dialogue cannot. The characters also seem well established and differentiated — each has different aspects and personality quirks that make them appear real and human, and not the cardboard caricatures you often see in shows. The musical does have its dark aspects — both literally and figuratively, given that a portion takes place in a completely dark coal mine. It ends up finding the light, and the self-discovery journey is one that turns out to be well worth watching.

Director Richard Israel (FB) is one of those local directors who you can  trust to do consistently good work, and he doesn’t let the audience down here. The performances he draws out of these actors are spectacular, and serve to demonstrate how acting alone can transport an audience — extensive realistic sets and locations are not required.  He makes great use of the minimal set to create the illusion of of multiple journeys in the hills, and he uses the actors skill to do the rest. This work combines with the great performances to make this show succeed.

The lead performers are a strong ensemble, which means it is difficult to separate the specific moments and strengths of particular characters. The three younger travelers — Pete, Dusty, and Frances — are brought to life by Daniel David Stewart (FB-Actor, FB-Personal), Adam Dingeman (FB), and Lauren Patten (FB), respectively. The older travelers — Jake and Chet — are brought to life by Aaron Scheff/FB and Joe Donahoe (FB). All gave remarkable performances and sang well. Some special kudos go to Adam Dingeman for his saw-playing (which I hadn’t seen before), and to Lauren Patten for the intensity of her performance. But all of them were spectacular and did a great job of drawing you into their characters, and making you feel that they were real people in that place and time.  They also gave off the feeling of enjoying these roles and these people — and when that happens, the audience shares in that joy.

Supporting these five were the four men who played the fathers lost in the mine, as well as few other supporting roles: Matt Musgrove (FB), Philip Dean Lightstone (FB), Richard Hellstern (FB), and Rich Brunner (FB). All projected the required strength and served the story well. Understudies, who we didn’t see, were Shane Orser/FB and Jessica Evans (FB).

The on-stage (but hidden) band was under the musical direction of Gregory Nabours (FB), and consisted of Nabours (FB) on keyboards, David Lee (FB) on guitars, Eden Livingood/FB on violin, and Nikolaus Keelaghan (FB) on viola and percussion.

The set was designed by Will Pelligrini (FB), and consisted of multiple levels of worn boards and wooden pieces, with a silhouette of mountains in the distance. The supporting props were provided by Nicholas Acciani (FB) and were suitably realistic and period. Supporting this illusion well was the lighting of Johnny Ryman (FB), who created the mood using solely yellows and blues, combined with a few LED lights. Cricket S. Myers (FB) sound was, as it always is, excellent — with particular kudos due for the amazing sound effects. The costumes by Vicki Conrad were also effective in  establishing place and time. Suzanne Doss/FB was the assistant director, and Lindsay Capacio/FB was the stage manager. “The Burnt Part Boys” was presented by Third Street Theatre (FB) and West Coast Ensemble (FB), and was supported by a Kickstarter (which, alas, I didn’t know about).

“The Burnt Part Boys” continues at the Third Street Theatre (FB) through October 20. Tickets are available online and through Goldstar.

Upcoming Theatre and Concerts:  Next weekend is currently unbooked — I have no idea what I’m doing. October ends with the Cabrillo Music Theatre (FB) production of “Kiss Me Kate” (October 26). November starts with “Dirty Rotten Scoundrels” at Actors Rep of Simi (FB). That will be followed by a visit with Thomas the Tank Engine when we volunteer at OERM over Veterans Day.  The third week will be theatre-ish, as we attend ARTS’s Nottingham Village (FB) (a one-weekend ren-faire-ish market — tickets are now on sale). One of those weekends we’re also likely to see a Trollplayers (FB) production of Steven Schwartz’s “Children of Eden” (which runs November 8-17) [Trollplayers is the community theatre group at Our Lady of Lourdes Church in Northridge]. The weekend before Thanksgiving will be very busy with three shows: Tom Paxton (FB) in concert at McCabes Santa Monica (FB) on Friday; “Play It Again Sam” at REP East (FB) on Saturday, and the rescheduled “Miracle on S. Division Street” at the Colony Theatre (FB) on Sunday. Thanksgiving weekend is currently open, as is much of December (December is due to the Annual Computer Security Applications Conference (ACSAC) in New Orleans, which has me out of two the first two weekends in December… but has me wondering about New Orleans theatre), but should bring “The Little Mermaid” at Nobel Middle School, and “Peter and the Starcatcher” at The Ahmanson Theatre. As always, I’m keeping my eyes open for interesting productions mentioned on sites such as Bitter-Lemons, Musicals in LA and LA Stage Times, as well as productions I see on Goldstar, LA Stage Tix, Plays411.