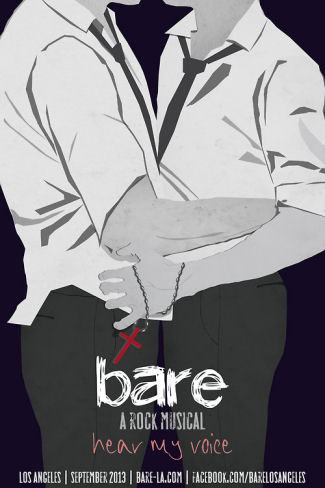 Recently, the theatre press in Los Angeles has been a-buzzin’ around the return of the musical “bare” to Los Angeles. Given all the buzz, I gave into the pressure and booked two shows this weekend (I normally only book one show per weekend, and I had already booked Carrie That Tune for Sunday). As a result, this afternoon saw us rushing to mid-Wilshire (and barely making it) for  “bare” at the Hayworth Theatre.

Bare (book by Jon Hartmere, Jr. and Damon Intrabartolo, lyrics by Hartmere and music by Intrabartolo) tells the story of two gay Catholic high-schoolers in love. Just with that summary, you might be expecting “Zanna Don’t“, but the story here is much darker. Zanna Don’t ends happy. This doesn’t. In that way, it is very Catholic.

bare takes place at a co-ed Catholic boarding school. Peter, a senior, is rooming with Jason, another senior and his secret lover. The basic focus of the show is the outing of this relationship, with various machinations along the way. These include interactions with Peter’s twin sister, Nadia (who is supposed to be fat, but wasn’t cast that way — more on that later). It also includes another girl, Ivy, who falls in love with Jason, complicating the relationship. Figuring all this out takes a while, because the show is 99% sung through, and hearing the lyrics clearly over the band was a little difficult. There’s a detailed synopsis over at the Wikipedia page — note that this production was doing the original version.  I’m not going to try to repeat it because (a) it is too complicated, and (b) I don’t want this post to be exceedingly long.

Reading the synopsis details one of the main problems with this show: the book needs some work and streamlining. Part of the problem is that it is a lot like Rent (its contemporary) — it is sung — or perhaps screamed — through.  The story is attempted to be told through the music and lyrics, with very little non-musical dialogue. Although this can work, it (umm) takes work to get it right. First and foremost, one must be able to clearly hear and understand the lyrics, and that wasn’t always the case here. Given that a number of the musical numbers seem to be generic rock supporting sung-through exposition, they could probably be reworked to help tell the story better while providing focus on the truly good numbers (of which there are many). The other problem with the book is the complicated nature and how it keeps coming at you: not only is the story dealing with a gay relationship, it is dealing with problematic parental relationships, teen pregnancy, sexual promiscuity, and heavy drug use (ending with an overdose). It’s a downer, man. The sole bright point in the story is Sister Chantelle and her humor.  If I had to choose between a musical to push the agenda of gay rights, I’d go for Zanna Don’t over this. Still, as evidenced by the audience, this show does have its following, and that’s likely due to the recent death of its young and talented composer, Damon Intrabartolo.

A few other observations on the story. It was very interesting watching this story in light of the recent statements by Pope Francis about how the Catholic church should focus on mercy and people before harsh and condemning dogma. That has a directly relationship to this story: Sister Chantelle demonstrate mercy; the priest demonstrates dogma. In the end, it is Chantelle who leads Peter to acceptance; and it is the dogma that drives Jason to his tragic end. How would this story be different in the Pope Francis era?  As it is, this story is pretty negative on dogma, and presents a sardonic picture of Catholic boarding schools — rampant sex, drugs, and disbelief  (which may be close to reality).

More importantly, bare shows how there is an overall lack of acceptance in Catholicism and their schools, and how this disconnection can have strongly negative results. Those who have seen the show previously argue that this picture is precisely why this show is an argument for acceptance. I can see that, but I think Zanna Don’t did a much better job of demonstrating gay acceptance through its postulating of a world where gay is normal and hetero is queer.

This story has quite a few parallels to Rent. I’ve previously noted the rock opera sung through aspects to the story. It also has a lot of characters with loads of intertwining stories and relationships. It doesn’t end happy. Its composer died far too early. Rent borrowed a number of themes from La Boeheme. My wife noted that bare borrowed some themes from Aaron Copeland. Is bare the Rent for the gay community? Hard to say.

What is the conclusion with respect to the book for bare? Overall, I think the story it tries to tell is a good one and an important one. I think it could have been told better. However, given the history of this musical, we’re likely stuck with the story structure and presentation — flawed as it is. It’s a good story — not great — that gets its message across but ends in a downer.

First and foremost: Stephanie Andersen (FB; FB-Fan) as Sister Chantelle. Andersen originated this role in the original 2000 production, and she just owns it. Hell, she runs with it, plays with it, loves it, and spreads the love. She also has what I think is the absolute best number in the show, “God Don’t Make No Trash”, although her other number “911! Emergency” comes a close second.

Also remarkable was Katie Stevens (FB) as Nadia, Jason’s sister. Although I don’t like the casting (according to the songs and the synopsis, Nadia should be large-size and the director didn’t follow through with that), Stevens was spectacular in the role. She had the right level of cynicism and standoffishness for the role, as was both fun and touching to watch. She also took no prisoners in her numbers “Plain Jane Fat Ass”  and “Birthday Bitch”.

The two male leads — Payson Lewis (FB) as Peter and Jonah Platt (FB) as Jason — were both strong. Lewis, in particular, did a great job of showing the emotional struggles his character was facing. Both had strong singing voices and carried the story well.

The last performer I would like to single out is Lindsay Pearce (FB) as Ivy. Again, this is someone who caught your eye through her performance, strong acting, and strong singing ability. She was particularly strong in her second act songs.

As for the rest of the company, they stood out strong as an ensemble in their singing and dancing, and a few of them (notably Caitlin Ary (FB) and Katherine Washington/FB) grabbed my eye whenever they were on stage due to their enthusiasm, stage presence, and general look. The rest of the company consisted of  Caitlin Ary (FB) [Tanya], John Griffin (FB) [Priest], Kelsey Hainlen (FB) [Rory], Casey Hayden (FB) [Lucas], Christopher Higgins (FB) [Zack], Reesa Ishiyama (FB) [Diane], Alissa-Nicole Koblentz (FB) [Claire], Harrison Meloeny (FB) [Alan], Nathan Parrett (FB) [Matt], Katherine Washington/FB [Kyra].

The production was directed by Calvin Remsberg (FB) (assisted by Jevin Andrews (at least according to the program — based on FB, I think the credit is really Andrew Jevin/FB), and choreographed by Jen Oundjian (FB) (assisted by Erik Hall/FB). The direction of the show was strong and effective, given the limitations of the space and the set. Choreography was especially strong and worked well for the rock score.

Turning to the technical. Sigh. The scenic design by Josh Clabaugh was very limited — some movable screens, some dressers, some pews, a set of lockers. This was understandable given the short run of the productions and limited budgets, but the show would have been helped with scenery that better established the various locales. The sound design by Drew Dalzell (FB), assisted by Rebecca Kessin and mixed by Sean Kozma (FB), was more problematic. As has been noted by other reviewers, the sound was often muddled (and it was worse in the back of the theatre, where I stood for one song). This could be a facility problem, and I think this show would have been better served in a venue such as the Colony Theatre or the Pasadena Playhouse — both for their larger size and better acoustics. Still, given the importance of hearing the lyrics in this show, having clear sound was vital, and at many times, it was lacking. The lighting by Brandon Baruch (FB) was effective and served to set the mood quite well. The costumes by Alex Merrell were both strong and weak. Strong, in that the women’s costumes were exceptionally sexy in that Catholic High School Girls in Trouble way; weak in that they didn’t have the uniformity that boarding school uniforms should have (especially in the boy’s ties), and that although they tried to dress Nadia to look fat, they failed miserably. Juliana Scott/FB was the production stage manager. bare was produced by Topher Rhys (FB), Jamie Lee Barnard/FB, and Glory|Struck Productions (FB); Stephanie Lazard/FB was co-producer. Bare was also funded by a successful kickstarter.

bare – A Rock Musical has one more performance, Sunday, at 7:30pm. Tickets are available through Plays411. Allocate plenty of time to get to the theatre — driving in that area is a bitch!

Upcoming Theatre and Concerts:  Tomorrow brings our second show of the weekend: “Carrie That Tune” (great songs from flop musicals) at the Avery Schreiber Playhouse (FB) in North Hollywood on Sunday.  We close September by returning to Santa Clarita and REP East (FB) for “God of Carnage” (September 28). Theatre in October starts on the 5th with “Breath and Imagination” at the Colony Theatre (FB).  The second week of October sees me at the West Coast Premier of “Burnt Street Boys“ at the Third Street Theatre (FB).  The third week of October is being held for the production of “Carrie – The Musical” (FB) by Transfer Theatre, but tickets are not yet on sale (and it is increasingly looking like this production will now be in 2014). October ends with the Cabrillo Music Theatre (FB) production of “Kiss Me Kate” (October 26). November will start (hopefully) with “Dirty Rotten Scoundrels” at Actors Rep of Simi (FB). That will be followed by a visit with Thomas the Tank Engine when we volunteer at OERM over Veterans Day.  The third week will be theatre-ish, as we attend ARTS’s Nottingham Village (FB) (a one-weekend ren-faire-ish market — tickets are now on sale). One of those weekends we’re also likely to see a Trollplayers (FB) production of Steven Schwartz’s “Children of Eden” (which runs November 8-17) [Trollplayers is the community theatre group at Our Lady of Lourdes Church in Northridge]. The weekend before Thanksgiving will bring Tom Paxton (FB) in concert at McCabes Santa Monica (FB) as well as “Play It Again Sam” at REP East (FB). The last weekend of November brings a rescheduled “Miracle on S. Division Street” at the Colony Theatre (FB).  December is mostly open, but should bring “The Little Mermaid” at Nobel Middle School, and “Peter and the Starcatcher” at The Ahmanson Theatre. As always, I’m keeping my eyes open for interesting productions mentioned on sites such as Bitter-Lemons, Musicals in LA and LA Stage Times, as well as productions I see on Goldstar, LA Stage Tix, Plays411.