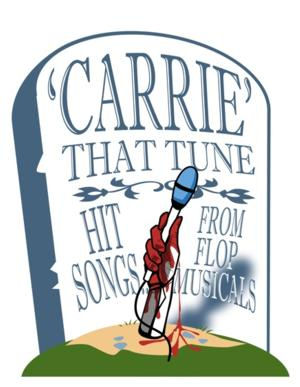 There once was a song that went “There’s just no tune / as exciting / as a show tune / in two-four”.  That song was written by Jerry Herman for the musical revue “Parade” in 1960. The musical went nowhere; the melody, however, was recycled into “It’s Today” from the musical Mame. It is an example of how many songs from failed or unknown musicals later went on to become hits… or at least were surprisingly good. I could give you many more examples, such as the Bobby Darin hit “Artificial Flowers”, which came from the musical Tenderloin. This notion — of spectacular songs from less-than-spectacular musicals — was the driving notion from the musical revue “Carrie That Tune” was saw last night at the Avery Schreiber Playhouse (FB) in North Hollywood.

“Carrie That Tune” was conceived, directed, and produced by Trace Oakley (FB), who was driven to develop the revue after reading Ken Mandelbaum’s excellent book “Not Since Carrie: Forty Years of Musical Flops“. This book looks at a large number of musicals, and attempts to ascertain precisely why they failed. [For those interested in failed musicals, other books that are good are “Second Act Trouble: Behind the Scenes at Broadway’s Big Musical Bombs“ by Steve Suskin; “Opening Night on Broadway: A Critical Quotebook of the Golden Era of the Musical Theatre” by Steve Suskin; and “More Opening Nights on Broadway: A Critical Quote Book of the Musical Theatre, 1965-1981“, also by Steve Suskin]. Oakley went through the book and picked what he thought were a representative sample of good songs from bad musicals and assembled them into a few with a little connecting material. As this is a revue, there is no plot — no synopsis — just a collection of songs.

The show begins with the infamous story of David Merrick and the publicity for “Subways are for Sleeping“, and continues through a large number of shows from the infamous flops to shows recognized for their scores, but which died due to problematic books. So what songs made it in? Here’s my list of the songs from each act. Alas, there was no official song list provided (nor was there a list of who sang which songs in the program — which is a disservice to the performers who are showcasing their talents — so I’ll edit in that information if I can get it. Right now, the performer information is base on my memory and best guesses).

Are these the songs that I would have chosen? Some of them are. Others less so. There are certainly songs that I would have included that are not here, such as “Artificial Flowers” (Tenderloin), “Hey Look Me Over” (Wildcat), “Change in Me” (Best Little Whorehouse Goes Public), “Coffee in a Cardboard Cup” or “Boom Ditty Boom” (70 Girls 70), “The Gentleman is a Dope” (Allegro), “That’s the Way It Happens” (Me and Juliet), or “Hey, Jimmy, Joe, John, Jim, Jack” (Let It Ride). I might also include some songs from modern “flops”, such as Leap of Faith, Scandalous, or Chaplin. But the choice of song is the director’s choice, and overall this was a pretty good list.

How were the performances? Most of them were in the good to very good range, and a few were spectacular. I say “Most” because there was the very-occasional off note, which I wrote off to the fact that most of the cast are new to musicals and the West Coast theatre scene, and I presume that they improve each performance. But those were in the “very few” range — as I said, the great majority of the show had strong singing, and certain performers were just exceptional. Specifically, I really enjoyed Averi Yorek (FB) and Joshua Kerr/FB who had exceptionally strong voices and shone in whatever song they were singing; and Alenda Bernardi/FB, who blew the audience away with a spectacular performance of “Glitter and Be Gay”. Performances I thought were particularly strong are indicated with † in the table above. About the only performance I wasn’t crazy about was “Meadowlark”, where I think they needed a stronger voice on the song (c’mon, Patti LuPone did it originally). In general, the actors had good stage presence and seemed to be having fun with the songs.

Most of the music was provided by Eunyoung Koh/FB on a keyboard on the side; a few tracks had recorded music when sheet music was unavailable. Koh was very focused on her music, but it was fun to see her face light up when she tossed a performer a hat during one number.

As noted before, the production was directed by Trace Oakley (FB), who did a good job of providing connection between the individual songs and making the songs more than just a “stand up and sing”. A few of the choices were a bit baffling, such as the stuffed chipmunks during “Meadowlark”, or the profusion of women during “Come Back To Me” (which has nothing to do with the point of that song). Other songs were particularly well executed, including the “Don’t Send Me Roses” pairing, the “We’re Gonna Be Alright” pairing, “Nobody Steps on Kafritz”, and “What Did I Have?”. Choreography was by Averi Yorek (FB) and was very good. I particularly enjoyed the dancing during the Bangkok number from Chess and the dancing during “What Did I Have?”. Musical direction was by Alenda Bernardi/FB. Kelly Stevenson/FB was the assistant director, and Tony Candelaria served as stage manager.

Turning to the technical… sigh. This is the one problem area for this show — as evidenced by the fact that there were no technical credits in the program (tsk, tsk). We can set aside sound design, as there were no microphones or special effects. Lighting? Having had a daughter who went through the technical theatre program at Van Nuys HS, as soon as I entered the theatre I noted lighting problems — there was a mix of odd lights (parabolics, leikos, bare bulbs), with few gels, and a number of potential safety issues (none of lights had safeties, which might be due to their mounting approach of being actually bolted to the mounting rack vs. the typical C-clamp; there also appeared to be loose strings and use of gaffers tape for something other than taping down cords). In execution, this was one of the few shows where the lighting actually hurt the show. At times the lights flickered oddly, at times performers were not lit, and most importantly, the lighting was just too harsh, highlighting costuming flaws and not serving to subtly establish the mood or the scene.  With respect to costuming (and I’ll note this input is more from my wife)…. there were a number of costuming problems. In a small venue such as this, hosiery can do a wonderful job of smoothing out imperfections on legs. My wife also noted some, umm, foundational problems, and there were a few costumes that could use a little repair. These imperfections would not be noticeable in a large venue, or a venue that was using less-harsh lighting (pink spots can be your friend), but the combination just distracted (when it was easily correctable).  The set itself was very simple — a few boxes, a door, a few props — and was sufficient given the budget limitations of a small venue.

[As an aside thought — it would be interesting to see this musical reworked to add in a few more popular numbers and proposed to a venue such as the Colony Theatre (FB). With an even stronger cast, fuller orchestrations, better lighting and costumes, and strong publicity, this could be a strong revue that is popular with audiences. Oh, Barbara Beckley (FB)… you should talk to Trace  (FB)!]

Upcoming Theatre and Concerts:  Next weekend see us returning to Santa Clarita and REP East (FB) for “God of Carnage” (September 28). Theatre in October starts on the 5th with “Breath and Imagination” at the Colony Theatre (FB).  The second week of October sees me at the West Coast Premier of “Burnt Street Boys“ at the Third Street Theatre (FB).  The third week of October is being held for the production of “Carrie – The Musical” (FB) by Transfer Theatre, but tickets are not yet on sale (and it is increasingly looking like this production will now be in 2014). October ends with the Cabrillo Music Theatre (FB) production of “Kiss Me Kate” (October 26). November will start (hopefully) with “Dirty Rotten Scoundrels” at Actors Rep of Simi (FB). That will be followed by a visit with Thomas the Tank Engine when we volunteer at OERM over Veterans Day.  The third week will be theatre-ish, as we attend ARTS’s Nottingham Village (FB) (a one-weekend ren-faire-ish market — tickets are now on sale). One of those weekends we’re also likely to see a Trollplayers (FB) production of Steven Schwartz’s “Children of Eden” (which runs November 8-17) [Trollplayers is the community theatre group at Our Lady of Lourdes Church in Northridge]. The weekend before Thanksgiving will bring Tom Paxton (FB) in concert at McCabes Santa Monica (FB) as well as “Play It Again Sam” at REP East (FB). The last weekend of November brings a rescheduled “Miracle on S. Division Street” at the Colony Theatre (FB).  December is mostly open, but should bring “The Little Mermaid” at Nobel Middle School, and “Peter and the Starcatcher” at The Ahmanson Theatre. As always, I’m keeping my eyes open for interesting productions mentioned on sites such as Bitter-Lemons, Musicals in LA and LA Stage Times, as well as productions I see on Goldstar, LA Stage Tix, Plays411.

One Reply to “There’s No Tune Like a Show Tune”