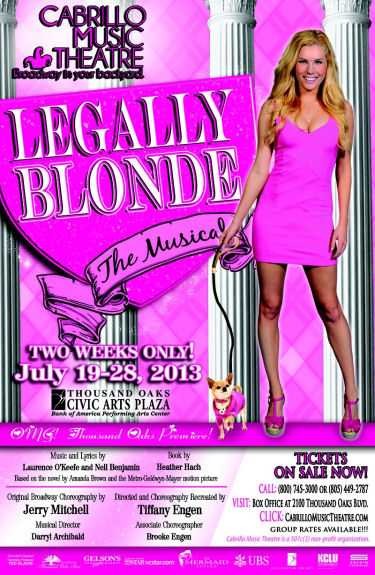 Movie-to-stage adaptations are interesting beasts, especially when the target is a musical. The notion seems to be: take a familiar property, add music, stir well, and you end up with something entertaining for the audience. Sometimes the transition works spectacularly (“The Producers“), and sometimes it doesn’t (“King of Hearts“). Sometimes the transition is a serious rexploration and musicalization (“Man of No Importance“), sometimes it is a camp romp and parody(“Xanadu“), but most often it is somewhere in the middle. One such translation is the movie “Legally Blonde” (2001), a fun summer flick about a blonde sorority girl chasing her man to law school, and discovering something about herself. The theatrical doppelganger to this confection appeared on Broadway in 2007: “Legally Blonde – The Musical“; it is currently on-stage in Thousand Oaks at Cabrillo Music Theatre (FB) in an excellent regional/professional production (non-tour). We saw it last night, and here are my thoughts on the show.

“Legally Blonde – The Musical” (book by Heather Hach, music and lyrics by Laurence O’Keefe and Nell Benjamin), based on the novel by Amanda Brown and the motion picture) is a relatively faithful translation. It tells the story of Elle Woods, a UCLA Delta Nu sorority girl, about to be engaged to Warner Huntington III. When Warner dumps her for someone more serious to advance his law career, Elle makes the decision to follow him to Harvard Law School. She gets in, and initially her “blonde” ways get her rejected both by the other students and a key law professor, Callahan. But the teaching assistant Emmett Forrest, together with a mental greek chorus of her sorority sisters keep her positive. She decides to become a brunette, but the beautician Paulette, who convinces her to stay blonde and keep plugging away. After another setback when she embarrasses herself, Emmett helps Elle reassess her priorities until she realizes it is her obsession with Warner that keeps her from earning his respect. This helps her move forward legally, and win a coveted internship position. During this internship, Elle has to defined fitness queen, Brooke Wyndham, a former Delta Nu. Elle obtains Wyndham’s alibi where no one else could, but never discloses it. Instead, Elle and Emmett use smarts to break the case open. Calahan hits on Elle, and so Elle and Emmett go of on their own, are hired by Wyndham, and subsequently use fashion smarts to prove Wyndham’s innocence. Cue happy ending. [This is a summary – you can find a full synopsis on Wikipedia]

The translation to the stage makes a number of changes from the movie. Some are minor, and others are annoying and nonsensical. Emmett’s involvement is increased into a significant mentorship role (essentially incorporating the role of the female Law School president). This works. The end is also changed from Emmett and Elle dating to Elle proposing to Emmett, which also works well and shows an important change in Elle’s character. What doesn’t work are the changes to Paulette’s role, which is not only expanded in importance, but has a large Irish dance aspect added for no rational reason. These changes annoyed my wife, who is movie purist for this movie; for me, the only annoying change was the Irish stuff. Why, oh why, did they feel the need to add that?

Otherwise, I think this was a relatively successful adaptation — primarily because they played up the sillyness and humor to just the right amount. They lampooned sorority stereotypes and various behaviors without turning into camp, and without turning the production into a parody of the movie (“Silence!“). This, combined with the high energy production as the excellent direction by Tiffany Engen (FB), made this production a joy to watch.

I normally don’t talk much about the direction, for I have difficulty separating what the director brings to the production from what the actors bring to the production. The Cabrillo production was directed and choreographed by Tiffany Engen (FB), with choreography assistance by her sister, Brooke Engen (FB), based on the original Broadway choreography by Jerry Mitchell. These two blondes (the Engen girls, not Mitchell) brought a delightful manic energy and joy to the production — these actors were having fun with the moves, story, and performance, and that joy was transmitted to the audience, making this a fun show. There was a great mix of realism and fantasy, played well. I’m guessing this is the contribution of the director, but it wasn’t so heavy-handed that it wasn’t natural. In other words, so to speak, this was clearly a natural Blonde, not a bleached bottle Blonde that is trying too hard.

Helping this all work together was an excellent acting ensemble, led by Emma Egerstadt* (FB, FB Fan, @DegerstedtEmma). Based solely on her look on the advertising postcards, I wasn’t sure she was right for the part. Then I saw her performance, and… wow! This young women was perfection as Elle — bubbly and determined, playful and sarcastic, and basically just a delight to watch. Hopefully, this is one of those Cabrillo finds that will go far in her career, and I hope to see her more on stage. Stealing the stage from Emma whenever he was on, however, was Frankie, the rescue dog playing Bruiser. Well-training and full of energy, this 7-year Chihuahua barked, jumped, and acted with abandon. Perhaps that’s why he was only on in selected scenes.

The second tier of actors were also excellent. Of particular note were Matt Bauer (FB, Muffookies) as Emmett, who portrayed a wonderful level of comfort and wisdom, as well as being an excellent actor, singer, and dancer. As Paulette, Lowe Taylor* (FB) was also very strong. We saw her back in 2011, in the Blank production of The Cradle Will Rock and we were impressed with her singing then; this show cemented the fact that she is a wonderful performer. Another notable performer was John D. Lemay (FB) as Callahan, who we’ve seen in numerous Cabrillo productions.  Lemay gave off a wonderful sharky-slime vibe, as well as being a great singer. Another supporting performer of particular note was Natalie Storrs (FB) as Vivienne. We were introduced to Storrs in Cabrillo’s You’re a Good Man Charlie Brown, where I wasn’t sure about Storrs’ look as Lucy, but was won over by her comic timing and singing skills. Both were put to great effect here, and she just was a delight as Vivienne (which was, inexplicably changed from the movie’s Vivian).  Lastly, Jaycie Dotin (FB) was wonderfully exhausting as Brooke, especially in her dance number that opened Act II.

Technically, the show was a marvel. Under the technical Direction of Gary Wissmann, people and set pieces were flying everywhere but it was all working out great. The scenery was originally designed by John Patrick for Citrus College Music Theatre workshop, and worked very well. The costumes, designed by Carin Jacobs for FCLO Music Theatre in Fullerton, worked well (although the UCLA costumes weren’t UCLA). Wardrobe supervision was by Christine Gibson. Hair and Makeup was by Cassie Russek.  The lighting by  Christina L. Munich worked very well in establishing the mood and scene, and Jonathan Burke (FB)’s sound, as always, was clear and crisp. Animal Training was by William Berloni.  Allie Roy* (FB) was the production stage manager, and Kirsten D’agostaro Shook (FB) was the assistant stage manager. Cabrillo Music Theatre (FB) is under the artistic direction of Lewis Wilkenfeld (FB), who also introduced the show and introduced the stage crew just before Act II when he awarded a stage crew scholarship.

Upcoming Theatre and Concerts:  This afternoon brings “Exposure” from OperaWorks at CSUN (FB). August starts with Nine at DOMA Theatre Ensemble (FB). That will be followed by “The Apple Tree” at ELATE/Lincoln Stegman]. Otherwise, August is currently completely open due to vacation planning, although we may see a show at the Lawrence Welk Resort in Escondido at the end of the month (depending on price), or at another venue in San Diego. September may bring Sarah Ruhl’s “In The Next Room or The Vibrator Play“ at the Production Company/Secret Rose (FB) and “Blue Man Group” at the Hollywood Bowl. The middle of the month may bring “The Vagina Monologues” at REP East (FB), and the end definitely sees us back at REP East (FB) for “God of Carnage” (September 28). October 5th brings “Breath and Imagination” at the Colony Theatre (FB), as well as the Cabrillo Music Theatre (FB) production of “Kiss Me Kate” at the end of the month (October 26). November will start (hopefully) with “Dirty Rotten Scoundrels” at Actors Rep of Simi (FB), as well as ARTS’s Nottingham Village (FB) (a one-weekend ren-faire-ish market — tickets are now on sale). November will conclude with “Play It Again Sam” at REP East (FB) at the end of the month (November 23), and “Miracle on S. Division Street” at the Colony Theatre (FB).  The fall should also bring a production of “Carrie – The Musical” (FB) by Transfer Theatre, but the specific dates have not been announced. As always, I’m keeping my eyes open as the various theatres start making their 2013/2014 season announcements. Lastly, what few dates we do have open may be filled by productions I see on Goldstar, LA Stage Tix, Plays411, or discussed in the various LA Stage Blogs I read (I particularly recommend Musicals in LA and LA Stage Times).