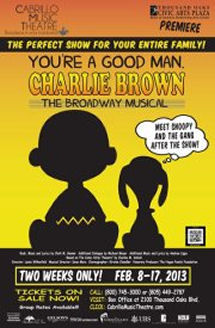 Comic strips — especially those regularly published in the newspapers — are interesting things. At one level they are aimed for children, but at another level they are something completely different. One of my favorite examples of this is the webcomic “Garfield minus Garfield“, which takes the regular Garfield comic and simply subtracts Garfield. This turns what is often a childish strip into a wonderful portrait of existential angst, sadness, and loneliness. I got to thinking about Garfield last night at Cabrillo Music Theatre in Thousand Oaks, while we were attending their latest production, “You’re a Good Man, Charlie Brown“.

“You’re a Good Man, Charlie Brown” (henceforth, YAGMCB) is a simple piece — a series of vignettes (very much like a series of comic strips) that illustrate incidents from the Peanuts comic strip written by Charles Shultz, where most of the vignettes are punctuated with simple musical novelty numbers. I’ll note it isn’t the only stage show about Charlie Brown; there is also “Snoopy! The Musical” (which I’ve heard but never seen), and the unauthorized “Dog Sees God: Confessions of a Teenage Blockhead” (which visits the characters (or close facsimiles thereof) as teens, which we saw in 2010). It features only six characters: Charlie Brown, Lucy, Linus, Schroeder, Sally Brown, and Snoopy. It’s inherent simplicity and small cast make it work wonderfully off-Broadway (where it ran for over 1,500 performances in early 1970) and in smaller theatres; that is also what works against it in larger Broadway venues (as demonstrated by the first Broadway run, which lasted only 32 performances, or the revival, which ran longer at 149 performances). This size problem is one thing that works against the show in the Cabrillo production — the show is simply dwarfed by the cavernous Kavli stage and theatre space. The inherent smallness and beauty of the piece is lost. This is no fault of the actors, writers, or directors, but of the producers. YAGMCB is simply not an appropriate piece for large theatres.

As I noted at the beginning, YAGMCB is a series of vignettes, with original book, music, and lyrics by Clark M. Gesner. The Cabrillo production is based on the 1999 revival, which replaced the original Patty with Sally Brown, and featured additional dialogue by Michael Mayer  and additional music and lyrics by Andrew Lippa. The vignette approach mirrors the comic strip nature very well, but it also means that it inherits another characteristic of many comic strips that make them bad for the stage: no through story. In the Peanuts strip, the characters never age, they never grow, they never learn. They never have crises to overcome along the path. That works well for gag-a-day strips; however, it works poorly for much live theatre. In the theatre, such productions are often enjoyable but ultimately empty, marshmallows that are sweet going down but mostly empty. What YAGMCB does have for depth — if you are looking for any — is the ultimate angst and depression (and yet continuing optimism, which will be torn asunder in his teens) of Charlie Brown when faced with the characters around him. You see these character traits (which were magnified and amplified in the unauthorized and aforementioned Dog Sees God) well in this show. With the adult side of your mind, they are fun to watch.

With the kid side of your mind, however, you see the simple strip. Here is where YAGMCB works quite well. It does bring the nature of the strips to the stage well. The universal humor, featuring situations we’ve all faced, works well. The director, Lewis Wilenfeld, does a great job of bringing out the kid in the adult actors. Although initially jarring, the fact that these are adults playing kids eventually fades  away, and you are left seeing the characters you love so well. The situations present reflect the best moments of the comic strip: Linus and his blanket, Schroeder and his piano, Charlie Brown and his kite, Snoopy and his food, Snoopy and his Sopwith Camel, Snoopy and his birds, Lucy and her crabbiness, and so on. The songs in the production, for the most part, are not deep. They are amusing and they often tell the story, but they don’t have complexity. There is one exception — the standout song from the show: “Happiness”. This is the closing song of the show, and it touches on everything it means to be a child, to be a friend, and it cements the relationships between these comic strip characters.

So let’s look at the characters… and the actors, who performed them very well. Although the production may have been dwarfed by the Kavli stage, the performances did a great job of filling the theatre.

As Charlie Brown, Dane Biren (FB) is appropriately youthful, but didn’t fully strike me as Charlie Brown. Still, especially as the show went on, he worked quite well. He had a delightful singing voice, and was particularly notable — both in performance and acting — in his numbers “The Kite” and “T.E.A.M.” (The Baseball Game). I also enjoyed him in the closing finale of “Happiness”. 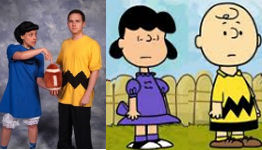 Lucy, as portrayed by Natalie Storrs (FB), was more problematic. For me, her look was off — she looked too old for the character, and her costuming was off (I never recall Lucy wearing bloomers in the strip, and this production put both Lucy and Sally in bloomers, as seen in the image to the right). However, her comic timing was wonderful, her performance was very strong, and her singing was great (and very much like the cast album). Storr particularly shone with her comic performance in “Schroeder” and “The Doctor is In”, and her vignette about crabbiness. Ultimately, I was won over by Storr’s Lucy despite the problems, and truly enjoyed her performance.

Linux, Lucy’s younger brother, was well played by Jeffrey Scott Parsons* (FB). Linus represents the philosophical viewpoint (he becomes a pothead in Dog Meets God), and Parsons portrayed that well. He was exceptional in “My Blanket and Me”, and touching in the aforementioned crabbiness vignette. In the 1999 revival, Linux was cast (for whatever reason) as Asian. I’m not sure how this would have affected the character’s reception.

Schroeder was cast with a black actor, following the model of the revival. As Schroeder, Todrick Hall* (FB) worked reasonably well. He sang a bit softer than I expected, but performed quite well. He also gave off — to me — a gay vibe to the character. It was just something in the mannerisms and vocal style. This aspect of Schroeder has been picked up by others (and is a major plot point in Dog Meets God, although it turns out there’s something darker, which is the conceit of Dog Meets God). In YAGMCB, however, it was a little odd. Hall was particularly great in Beethoven Day, one of the new numbers introduced for the revival, as well has his interactions with the other characters.

Sally Brown is a character that was new to the revival. Her character replaced the original Patty of the strip (not Peppermint Patty). Reba Buhr (FB) did a great job with her, channeling Kristen Chenowith, the original Sally Brown, quite well. Buhr moved well and sang well, and was a standout in her number “My New Philosophy”. She also captured Sally’s mood swings very well. She was very fun to watch.

Lastly, we have Snoopy, as portrayed by Zachary Ford* (FB). As any Peanuts reader knows, although Charlie Brown is the center of the strip, Snoopy is the star and lead character. That definitely comes across in this show. Although costumed somewhat poorly (a white jumpsuit with no indications of dog), Ford still came across as a dog pretty well, especially in numbers such as “Suppertime”. He was also great in his acting, as shown in the Red Baron number, and his comic performances (as seen during the rabbit chase).

Tessa Grady and Bear Maneschalchi/FB were the understudies.

YAGMCB was directed by the aforementioned Lewis Wilkenfeld, who did a good job bringing out the “kid” in the performances, although some of the movements seemed out of place. Choreography was by Kirsten Chandler, and for the most part was very good, although there were a few spots where it didn’t seem kid-like. Chandler was hindered by the very large Kavli stage and the lack of significant set pieces, providing very little for her to choreograph against. Dean Mora did a wonderful job of music direction and led the spectacular Cabrillo orchestra.

For this production, Cabrillo used the sets by Off-Broadway West, LLC, with additional props by Anna Grijalva/FB. These sets worked, but they were dwarfed by the facility. I did appreciate the fact that they attempted to use perspective to make the actors look like children — extra large props, sofas, pianos, and other set pieces made the actors seem smaller. Sound design was by resident Cabrillo designer Jonathan Burke (FB), and was particularly notable in the high quality of sound effects used. The lighting by Coby Chasman-Beck also worked quite well in establishing the mood, which was supplemented by the excellent projections of Kaitlyn Pietras. Costumes were provided by The Theatre Company in Upland, and worked well for Charlie Brown, Schroeder, and Linus, less so for the Lucy, Sally, and Snoopy. Tim Schroepfer (FB) was the technical director. Allie Roy* (FB) was the production stage manager, assisted by Taylor Ruge. Cabrillo Music Theatre is under the artistic direction of Lewis Wilkenfeld.

One of the things I like about Cabrillo is their family nature. Last nights show included a raffle to have the Kabrillo Kids serenade your sweetie before the second act (which was cute), interactions with local dog rescue organizations, and their usual wonderful support of the Naval Base in Ventura County. This is what makes Cabrillo a very special organization.

Upcoming Theatre and Concerts:   Today brings a British sex farce, “Run for your Wife” at Canyon Theatre Guild. The last weekend of February is “The Snake Can” at the Odyssey Theatre (based on an ad that caught Karen’s eye in the latest Footlights). Karen (but not me) will be seeing “When You’re In Love The Whole World is Jewish” at the Greenway Court Theatre on Feburary 21. March starts with “I’ll Be Back Before Midnight” at the Colony. The following weekend sees us in North Hollywood for “Company” at the Crown City Theatre. The third week of March takes us to the Pantages and Hollywood for  “Catch Me If You Can”on March 16. The fourth week of March brings “Boeing Boeing” at REP East on March 23. March may also bring “End of the Rainbow” at the Ahmanson, most likely on March 30. April will bring the Southern California Renaissance Faire , “Grease” at Cabrillo Music Theatre, and a winetasting at Temple Ahavat Shalom. May is also busy, with two concerts — Elton John in Las Vegas on May 4, and (tentative) Michael Feinstein at VPAC on May 11. May may also bring “Falling for Make Believe” at The Colony Theatre, “To Kill a Mockingbird” at REP East. Lastly, continuing the look ahead, June will bring (tenative) “The Scottsboro Boys” at the Ahmanson Theatre, “Priscilla – Queen of the Desert” at the Pantages, (tentative) Sweet Charity“ at DOMA, and the Western Corps Connection at the end of the month. I’m also keeping my eyes open as the various theatres start making their 2013 season announcements. Lastly, what few dates we do have open may be filled by productions I see on Goldstar, LA Stage Tix, Plays411, or discussed in the various LA Stage Blogs I read (I particularly recommend Musicals in LA and LA Stage Times).