Summer camp, for those of you that have experienced it, is often a life-changing experience. It is so pivotal for some children that Ira Glass has mused on it for This American Life. It certainly was for me — it defined my relationship to Judaism for me much more than any synagogue; it shaped my character and my concern about people; it led me to be the type of person that just jumps in and does what needs to be done. Camp was “just do it” long before there was a Nike.

In my case, the camps were the Wilshire Blvd Temple Camps: Camp Hess Kramer (FB) and Gindling Hilltop Camp (FB). I started attending CHK in 1969, and added GHC in 1971, and continued at both camps until 1979. I tended to prefer GHC — it was the smaller camp, it was more informal, it was more individualistic. In those early years (Hilltop started in 1968, vs. Kramer’s 1952 start), Hilltop had that “pioneer” nature — you were not only at camp, you were making camp and establishing tradition. Studies have shown that Jewish summer camps such as these (and there are many many such camps) are much more effective in keeping kids Jewish than any religious school can ever be. 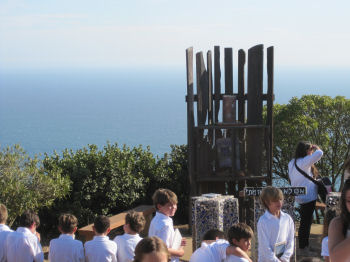 A side effect of this is that whenever there is a chance for me to get to camp (at least one that I can afford), I go. This can be various alumni events at camp that have happened over the years; more recently, it has been the alumni shabbat events that are offered. On these Shabbat, a small number of alumni have the opportunity to go up to camp to join the session in progress for Shabbat. I’ve been going every year since they started in 2006 (you can read about all my camp posts here). This year comes on the heels of what could have been a disastrous fire: the Springs fire in May came one canyon away from camp. Luckily, camp survived and (according to Andrea, the director), they only evidence of the fire is at Sycamore Canyon where they go on beach day, and what is seen on hikes.

One reason camp is special is that it is one of the few places I feel spiritual. Normally, I have a more distanced relationship to Judaism. I love the traditions and the history, but a connection to G-d? Can you feel that in the concrete, marble, and steel chambers that most congregations erect? But at camp, it is totally different. When you are sitting out at the top of a hill in Malibu, it is impossible not to feel the connection. The view above of the ark should give you one example; just below is another view of the menorah on the hill at Hilltop. 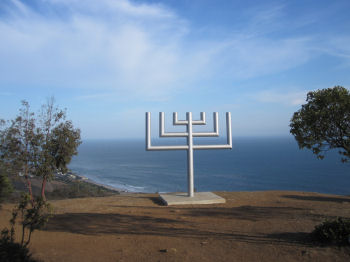 During the service, the fellow leading the service (I didn’t get his name) had some interesting observations. He noted that things have changed over the years — using the Birkat (prayer at the end of the meal), it has grown longer from just the last sentence to the much longer version they use today. Yet with all the change, things have stayed the same. The sprituality, the connection, the magic that the place conveys remains. The “safe”-ness that camp brings is still there, even over 40 years after my first visits. This was reemphasized during closing: the stars are the same, the sunsets are still beautiful (see the picture below). These don’t change.

But some things do change. Last night I found myself noting some of the changes as I stood back a bit and watched:

So that’s it for this year’s alumni shabbat.