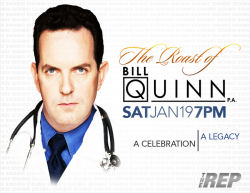 How do you celebrate a milestone friend on a milestone birthday? This was the question that was answered by the pop-up production we saw last night at REP East Playhouse in Santa Clarita: “50k @ 50: The Roast of Bill Quinn“. Alas, it was a one-night-only show, although I’m sure you could still buy tickets.

50k@50 tells the story of a young boy who grew up in a plastic box, who went on to become a Physician’s Assistant,  an actor, a director, a member of the REP Board of Directors, and most importantly, a good friend to those around him. The story was presented in a disjointed fashion, much like the Laramie Project. This made the plot hard to follow, but as the evening wore on (aside: “The evening wore on.” That’s a very nice expression isn’t it. With your permission I’ll say it again. “The evening wore on.”)… as I was saying, as the evening wore on, we learned through laughter and love how much this man has touched not only his family and friends, but a community. And I mean touch in a good sense.

In all seriousness, last night the REP celebrated the 50th Birthday of Bill Quinn, the past President of the REP Board of Directors and a long-time actor and director at the institution. This celebration was in the form of a roast, which is why the previous paragraph was written the way it was. Bill actually conceived the evening as the way of establishing a lasting legacy for the theatre: a base of contributions that would be a sustaining center for the theatre. We were lucky enough to be permitted to join in the celebration, and it was just a delightful evening. Throughout the roast, which was helmed by REP artistic directors Ovington Michael Owston and Mikee Schwinn, we learned about all the hard work that Bill does — both in his day job and for the REP. We also learned how much Bill’s larger family — both those related by blood and those related by sweat — care about him. Roasts and testamonials were presented by member’s of Bills family (his niece and sister), as well as by actors, directors, and staff with whom Bill has worked. The evening also included a few musical numbers. Through raucous laughter and stories, the evening served as a testament to how one person, through hard work, can do good for a community.

The evening also demonstrated why the REP is one of the most unique theatre companies around, at least to us. REP is much more than a black box where you pay money to see a story performed in the dark, surrounded by a whole bunch of other people, all of whom have paid a modest amount of money to be there. REP is truly a family–a family consisting not only of the REP staff and the REP artists, but the subscribers and patrons of the REP, who come together to nourish their souls through performance, friendship, and I must admit a little liquid lubrication as well. This is something you don’t see that much at the mid-size and larger theatres; you might find it at other Equity-waiver houses (99 seats and under), but I haven’t encountered it. These other houses, when fundraising, put up celebrity performers or present other special performance events. REP is family helping family. We are proud, as patrons, to consider the REP family of staff and artists as friends. If you haven’t been to REP before, I urge you to go there (their next performance is The 25th Annual Putnam County Spelling Bee, starting January 25 — you can order tickets here). See why the place is special… and who knows, you might even run into Bill. 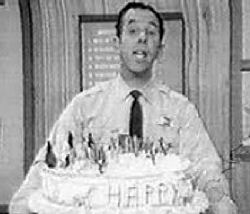 Now, my birthday tradition is to sing a song (well, actually, to have Sheriff John sing a song, for you really don’t want me to sing — there’s a reason I’m in the audience and not on the stage). So let’s all sing together for Bill…

So when you find it in your mailbox for the first time my friend
You can tell that you getting older, you’re turning grey
It’s a first sign of decline, it’s a start of the end
When your wrinkles out number your hairs
then it’s headed your way

Chorus: Modern Maturity, means you’re getting old
When you get the magazine
that you hide from your friends
Once it was Rolling Stone, it was thrill after thrill
Now Modern Maturity means over the hill

That’s not it either. Oh, here it is:

Happy Birthday to You
You’re another year old today.

Thank you, Bill, for all you do for the community of Santa Clarita and REP East… and thank you to the folks at REP East for letting us be part of the celebration.

“50k @ 50: The Roast of Bill Quinn” was a one-night production, but you can still make donations to REP East in honor of Bill’s 50th birthday (or my birthday, on Monday). ETA: You can also see the videos of the evening here.

Upcoming Theatre and Concerts:   January 26 take us to Orange County for Triassic Parq–The Musical at the Chance Theatre (Goldstar). February will start with the first play of the REP season, “Putnam County Spelling Bee“.  February 9 might be “Backbeat” at the Ahmanson, but I’m unsure about the show, and Karen is getting theatre-ed out (is that possible?). February 16 brings “You’re a Good Man, Charlie Brown” at Cabrillo Music Theatre, and the last weekend of February is currently open. March starts with “I’ll Be Back Before Midnight” at the Colony. After a break for Fogcon (although I may do something here), theatre picks up with “Catch Me If You Can” at Broadway LA/Pantages on March 16 and “Boeing Boeing” at REP East on March 23. March may also bring “End of the Rainbow” at the Ahmanson, most likely on March 30. April will bring the Southern California Renaissance Faire (huzzah for the $15 Holidazzle sale), “Grease” at Cabrillo Music Theatre, and “To Kill a Mockingbird” at REP East. I’m also keeping my eyes open as the various theatres start making their 2013 season announcements. Lastly, what few dates we do have open may be filled by productions I see on Goldstar, LA Stage Tix, Plays411, or discussed in the various LA Stage Blogs I read (I particularly recommend Musicals in LA and LA Stage Times).