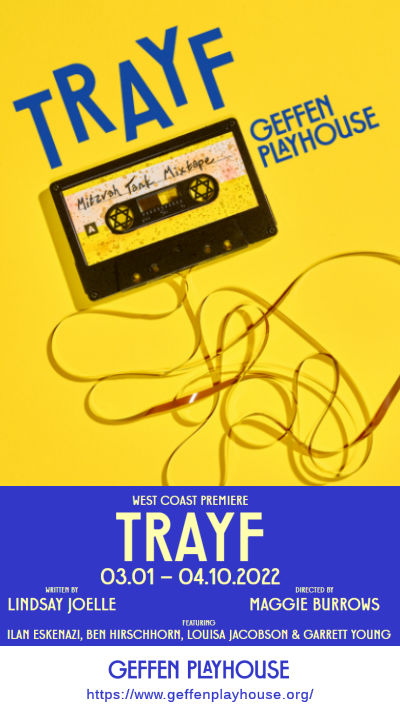 As you may have figured out by now, I wear many hats. Some look like train engineer hats. Some are whatever a roadgeek wears. Some protect your information technology investments. And others, well, clip on with a hair clip and cover your head in shul. In other words, a kippah. Now, mine isn’t always black, nor do I wear a fedora on top of that, or any other additional hat. Still, I know those communities well, being a co-maintainer of a set of Frequently Asked Questions on Judaism, as well as founder and moderator of the Liberal Judaism Mailing List.  More on that in a minute.

With my kippah on, I serve as facilitate for a group out of our Reform synagogue in Northridge that regularly attends Jewish-themed live theatre. We’ve attended a wide variety of shows over the years: Eight Nights at Antaeus; It Shoulda’ Been You at MTG; Shared Legacies at JWT;  Stars of David at the Y! I Love Yiddish Fest; Fabulous Fanny Brice; Allan Sherman Unmasked!; and Jews, God, and History (Not Necessarily In That Order). So I’m always on the lookout for Jewish themed theatre for our group; and as COVID restrictions were lifting, something we could do in person again. So I was very pleased to get an email from the Geffen Playhouse announcing a production that sounded interesting. Here was the description:

Zalmy lives a double life. By day, he drives a Chabad “Mitzvah Tank” through 1990s New York City, performing good deeds with his best friend Shmuel. By night, he sneaks out of his orthodox community to roller-skate and listen to rock and roll. But when a curious outsider offers him unfettered access to the secular world, is it worth jeopardizing everything he’s ever known? This road-trip bromance is a funny and heartwarming ode to the turbulence of youth, the universal suspicion that we don’t quite fit in, and the faith and friends that see us through.

The production was Trayf , written by Lindsay Joell and directed by Maggie Burrows, which would be running at the Geffen from March 1 through April 10, 2022. So I put out a call to see if there was interest, and coordinated group tickets. We ended up with a group of 18 temple members, who came out to Westwood Saturday afternoon to see the show. It was a very successful outing.

Trayf tells the story of Zalmy (Ilan Eskenazi) and Shmuel (Ben Hirschhorn), two Chassids out Crown Heights, best friends since grade school, who are going around encouraging people to do mitzvahs. For shoe unfamiliar with Chassidic Judaism, let me explain (from my FAQ): Chassidic Judaism is a group within the broader rubric of Orthodox Judaism. It started in the 1700’s (Common Era) in Eastern Europe in response to a void felt by many average observant Jews of the day. The founder of Chassidism, Rabbi Israel Baal Shem Tov (referred to as the “Besht,” an acronym of his name) was a great scholar and mystic, devoted to both the revealed, outer aspect, and hidden, inner aspect of Torah. He and his followers, without veering from a commitment to Torah, created a way of Jewish life that emphasized the ability of all Jews to grow closer to G-d via everything that we do, say, and think. In contrast to the somewhat intellectual style of the mainstream Jewish leaders of his day and their emphasis on the primacy of Torah study, the Besht emphasized a constant focus on attachment to G-d and Torah no matter what one is involved with. The group continued, as modern Lubavitch Chassidism,  commonly known as Chabad, follows Rabbi Schneerson and his teaching. They are still very active today with Chabad Houses in almost every community. They are well known for inviting more secular Jewish in to do commandments laid out in the Torah, such as joining them for Shabbat, laying Tefillin. Back in the 1990s, when this story took place, they were active going out on the streets to pull folks in to do Mitzvahs. I remember them regularly on the streets of Westwood when I was at UCLA.

So, back to the story. Zalmy and Shmuel are in Chabad, best friends in the insular community that is Crown Heights, following all strictures of Orthodox — including separation from the secular world. Their own outreach is the Mitzvah Tank — a van they take to neighborhoods to “spread the word” (but only to other Jews, as Judaism does not encourage conversion). Shmuel has a secret, thought … he loves secular music and is drawn to it. One day, in comes Jonathan (Garrett Young), a young man whose father just died, and who discovered information that his father’s family were survivors of the holocaust, rescued by a non-Jewish family. He wants to get in touch with his Jewish soul. One of the through lines of this play is Jonathan’s movement into the insular community. As he learns about Chabad’s enthusiastic brand of Judaism, he is drawn in deeper.

But we do learn in Judaism that no one’s path is travelled in isolation. Jonathan’s journey impacts others. One person impacted is Leah (Louisa Jacobson), Jonathan’s girlfriend. Suddenly — although she is Jewish by birth — she is no longer Jewish enough for Jonathan. You see, she was raised Reform. Her kitchen isn’t kosher; she doesn’t observe the strictures, and Jonathan pulls away. Also impacted is the tight friendship of Zalmy and Shmuel. Shmuel is drawn to Jonathan for the secular music, and keeps encouraging Jonathan to come into the Chabad community more. But as he comes in, the secular is pushed out. This drives wedges between Jonathan and Shmuel, and Shmuel’s embracing of the secular draws a wedge between him and Zalmy.

On one hand, this story is a deep examination of the power of friendship, and whether that friendship can survive someone moving out of an insular community. Is the strictures of one’s faith more powerful than friendship. But this is also an examination of what an insular community can do to someone: how it can draw them in and get them to reject their former live and friends. But for me, what was most telling was the one scene with Leah, where a Reform Jewish woman was considered “less than” by these two young Chabbadniks. That’s not really what Judaism teaches, yet it is an attitude that is far too common.

This got me thinking back to my days at UCLA, across the street from the Geffen. I was effectively a Jewish Studies minor, and I knew a few Chabbadniks. Yet I never gave in to going to the Chabad House (or Hillel). I know folks who did. But one of my best friend was from the Orthodox Yeshiva community, and we had wide ranging intellectual discussions I treasure to this day. There is beauty in what Chabad does; but I don’t always agree with their isolating approaches. But it did trigger those memories.

In general, I think this was a great show for our little group (I’ve also recommended The Lehman Trilogy, which we saw last week). I’m on the lookout for our next show.

The scenic design by Tim Mackabee was simple: chairs, a streetlight, some signs, a center auto console with a tape deck. This conveyed enough to establish the needed sense of place. It was supported by Lap Chi Chu‘s lighting design that established the mood, and Everett Elton Bradman‘s sound design, which provided the soundscape for the lives and communities. Denitsa Bliznakova‘s costumes captured the Chabad esthetic well. Rounding out the production team were: KC Monnie Choreographer; Rachel Wiegardt-Egel Dramaturg; Leia S. Crawford Production Stage Manager; Matt Shakman Artistic Director; Gill Cates Jr. Executive Director; and Behnaz Ataee CFO.  I always make a point to credit the COVID-19 Compliance Manager, Phil Gold, without whose work the theatre would not happen.

For right now, we’re pretty much sticking with shows that come as part of our subscriptions or are of interest through our memberships. That may change later in 2022. As for the remainder of the first half of 2022: We have no more theatre in March. April brings Ann at The Pasadena Playhouse (FB), the Southern California Renaissance Faire; and Tootsie at Broadway in Hollywood (FB). May brings Hadestown at at the Ahmanson Theatre (FB). June will see Come From Away at the Ahmanson Theatre (FB) and Pretty Woman at Broadway in Hollywood (FB), as well as Tom Paxon at McCabes plus as much of the Hollywood Fringe Festival as we have the energy for.