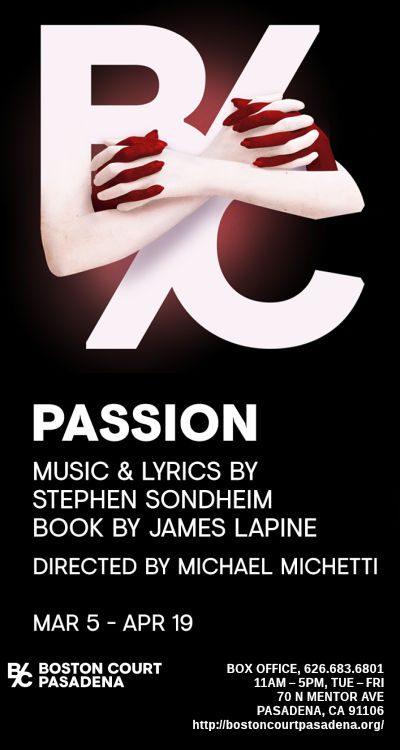 Back in November 2017, we were subscribers at a small theatre in the West Adams district of Los Angeles called Chromolume. They had just announced their 2018 season: Dessa Rose, Jane Eyre: The Musical, and Stephen Sondheim’s Passion. Alas, only Dessa Rose happened. During the spring the company died; their last show was The Story of My Life during HFF18. But as I do, I had gotten the cast album for Passion, one of the few Sondheim shows I hadn’t seen. Listening to it, it seemed a darkly romantic show — but the story was very hard to imagine from the music alone.  So I was presently surprised when I discovered that Boston Court (FB) in Pasadena was doing the show this month. Finally, a chance to see it.

So last night, as opposed to braving the snows of Madison last week, I braved the fear of COVID19 and went out to Pasadena. Grabbing some hand sanitizer, I steeled myself for Stephen Sondheim’s passion. For a Sondheim show, especially one that won multiple Tony awards (including Best Musical), this is one that has seen little press and few revivals. Why? This win occurred in the face of a small number of performances: 280. It opened in May, closed the following January. How did this short running musical win over Beauty and the Beast?

Passion is a one-act musical, with music and lyrics by Stephen Sondheim and a book by James Lapine. The story was adapted from Ettore Scola‘s film Passione d’Amore, itself adapted from the novel Fosca by Iginio Ugo Tarchetti. The central characters of the story are an 1860-era Italian Army captain, Giorgio Bachetti; his lover Clara in Milan; and the cousin of his superior officer in a provincial Army camp, Fosca.

The story opens with Bachetti in the arms of his lover, Clara. He informs her that he has been transferred to the provincial camp and must leave her, but will write regularly to keep their passion alive. Arriving at the camp, Giorgio meets the other officers and learns about the mysterious cousin of his commanding officer, Colonel Ricci, named Fosca. She’s medically frail, and often has hysterical and emotional screams. She is tended to by the unit’s doctor, Dr. Tambourri, who informs Bachetti that she tends to be alone with her books. Bachetti loans her some of his books. Through the subsequent scenes, we get to meet Fosca and see how she connects with Bachetti. Her friendship turns into obsession (what today we might call stalking), while Bachetti continues to be focused on his lover, Clara. Over time, we see this obsession grow and take over Fosca’s life. We also see it begin to affect Bachetti’s relationship with Clara. By the time the show is over, we see the relationship with Clara broken, Bachetti in love with Fosca, and then Fosca dying.

You can find a much more detailed synopsis on the Wikipedia page.

I had a number of thoughts after seeing this piece, first and foremost of which was: A venue the size of Boston Court is perfect for this piece. This is a distinctly chamber piece that requires one to see the actors up close and feel the emotions up close. It would be lost in a Broadway house, a touring house, or even a mid-size theatre. This is Sondheim sized-right.

My second thought was: This is a slow and sensitive piece — again, chamber music, not musical. The music is slow and lush. There is rarely anything toe-tapping. It is romantic and obsessive, full of feelings. It isn’t your typical “song and dance”; it isn’t even a Sweeny Todd or Into The Woods where there are just fun numbers. This is raw emotion. It is heavy Chix-theatre. I’m glad I saw it, but it’s not something I’d go out of my way to see again. Further, this makes clear why this isn’t mounted very often.

Thirdly, there is a sense of dated-ness in the story. There are attitudes towards and about women shown here that are appropriate for the era of the novel, and even appropriate to be voice in the 1990s, that are just a bit iffier today (especially the notions that women are nothing without marriage). This is a problem I’m seeing increasingly in shows.

But, surprisingly, even though I found the story a bit romantic for my tastes, I found myself drawn into it. Part of this was the performances, which were exceptional. However, the story is crafted to draw you in — to make you wonder how this triangle will be involved. In that, it is great theatre that makes you care about the story and turns the people from writing on a page into believable characters. Kudos to director Michael Michetti for realizing the vision and making the show so effective.

But the performance team is also top notch. My personal favorite is Meghan Andrews (FB) as Fosca. She gave a stunning performance, which was much more than what she said or show she said it. From her tremors to her weakness to her hesitency, she embodied the invalid Fosca. She made you believe this was a young women overtaken with frailty and emotions. You could also see — just from her performance — how her passion made her stronger, and the fear of the loss of it weakened her. Combine this with a beautiful singing voice, and this was just a stunning performance.

Also strong was the object of Bachetti’s passion: Bryce Charles (★FB, FB) as Clara. She’s the first actor you see, and she has a face that does a wonderful job of radiating joy. She also has an extremely beautiful singing voice.

The third key player is the man at the center of the story: Richard Bermudez as Georgio Bachetti. His performance has a magnetism that makes it clear why these women were drawn to him; again, he also has a lovely singing voice.

In standout featured supporting roles were Nicholas Hormann (FB) Doctor Tambourri and Mark Doerr (★FB, FB) Colonel Ricci. Hormann was a wonderfully warm presence, expressing concern about both Fosca and Bachetti. We saw a bit less of Doerr, but he was great in both telling the backstory of Fosca and in defending her honor at the end.

Rounding out the performance team were Jacob Sidney (★FB) Lt. Torasso / Fosca’s Father; Rene Ruiz (FB) Sgt. Lombardi; Ted Barton (FB) Lt. Barri, Andrew Rudy Galindo (FB) Maj. Rizzoli; Tyler Joseph Ellis (FB) Ludovic / Pvt. Augenti; Alexandra Melrose (FB) Attendant / Fosca’s Mother; and Julia Aks (★FB) Ludovic’s Mistress / Attendant. Most of the military officers you couldn’t tell apart, even with the program, but I did like the ones playing the cook, and the one who had the horses who made the jokes all the time.

This really wasn’t a dance musical, although there was a lot of military precision marching between scenes and to move stuff on and off the stage. The choreography was by Rhonda Kohl (★FB).

Speaking of sound effects: Those sound effects must have come from the sound design of Martin Carrillo (FB), which in general worked well. Turning to the other members of the production and creative team: The scenic design of Tesshi Nakagawa: Chairs, a multi-purpose table/bed, a multi-level set. It worked well, and showed why this piece is effective in intimate theatre. This design was supported by the lighting design of Jared A. Sayeg (FB) (who is always reliable); I particularly noted the red lighting in the penultimate scene. Period was established more by the costumes of David Kay Mickelsen (FB), which seemed appropriate period for whatever period it was. The supporting properties were designed by Jenny Smith Cohn (FB) and Jesse Soto (FB). Rounding out the production team were: Dyoni Isom (FB) Assistant Director; Nicole Arbusto Casting Director; Trixie Eunhae Hong Production Stage Manager; and Mary Popoff Asst. Stage Manager.

Stephen Sondheim’s Passion continues at Boston Court (FB) in Pasadena through April 19. Tickets are available online. They do not appear to be listed on Goldstar at this time. I found the show quite good as a chamber musical, but expect a slower more, well, passionate musical. Then again, go in with no expectations, for as they say in the show, “if you have no expectations, you can never know disappointment.”

A COVID19 note: I’m getting increasingly worried about theatres cancelling shows due to the COVID19 fears. So please, folks, wash your hands, and don’t attend the theatre if you have symptoms. Call the box office and see if you can exchange your ticket or get a refund. I’m sure they would rather do a refund than risk having to cancel a series of shows because someone was sick. Want to learn more? Listen to this ScienceVs podcast as you drive to your show.

Next weekend brings the MRJ Man of the Year dinner (and The Wild Party at Morgan Wixson). The 3rd weekend of March brings Morris’ Room at Actors Co-op (FB) ; and the last weekend brings Spongebob Squarepants at the Dolby Theatre/Broadway in LA (FB) and the MoTAS/TBH Seder. April is similarly busy: the 1st weekend is Mamma Mia at 5 Star Theatricals (FB); the 2nd is during Pesach and is open (but has Count Basie at the Soraya/VPAC (FB) the Thursday before); the 3rd is Once on This Island at the Ahmanson Theatre; the last is Hamilton at the Hollywood Pantages (FB) (and possibly Hands on a Hardbody at the Charles Stewart Howard Playhouse (FB)), and the first weekend of May is Mean Girls at the Dolby Theatre/Broadway in LA (FB). The second weekend of May brings a concert performance of Randy Newman’s Faust at the Soraya/VPAC (FB). The third weekend of May brings A Man of No Importance at Actors Co-op (FB) . The fourth weekend are currently open, but I”m eyeing a production at the Fountain Theatre for our synagogue’s live theatre group during that time. The fifth weekend will bring Ann at the Pasadena Playhouse (FB).