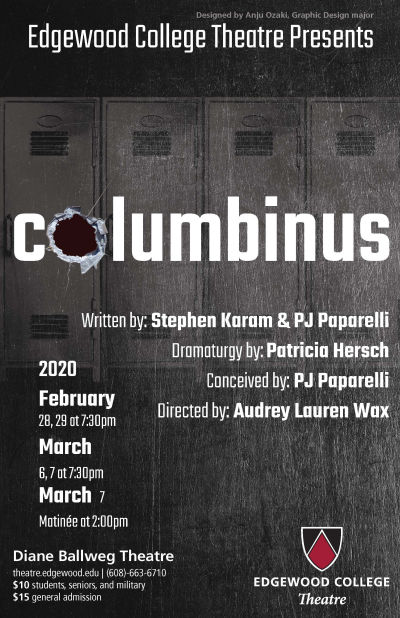 As I indicated in my last writeup, being I’m out of town on vacation doesn’t mean that the live performances stop. Being out of town solo also affords me the ability to see the type of show that my wife would find to be too dark. Last nights show was one of those: Columbinus, written by Stephen Karam and PJ Paparelli. Columbinus is a docu-drama about the Columbine High School Massacre, where two students, Eric Harris and Dylan Klebold, murdered 12 students and one teacher, and injured many many more. As I said: A dark subject.

Columbinus is not a fictional dramatization. Rather, using an ensemble of young people, it follows the events in their lives before, during, and after the shooting. We first meet the cohort of students as they wake up, and we learn the “who” of who they are: the jocks, the science nerds, those off to the sides, etc. This takes up perhaps the first half of the first act. We then start seeing the growing alienation and ostracizing of two of the more angry students, leading up to the first incident of vandalism and “mischief”. The second act sees the attempts at rehabilitation failing, and those two students — now explicitly identified as Dylan and Eric — starting to plan their attack. We then see the attack — both through the 911 tapes and the stories of survivors from the library. Lastly, we see the aftermath on the other students and the parents.

The presentation is strong, with VERY strong language and VERY strong material. This is certainly a show where guidance is required — if you at all sensitive to violence, racial language, hatred, and gun violence, this isn’t for you. So why SHOULD you see this show?

The answer, I think, is in addressing the question of “Why?”. Often, when I see shows, they dovetail with something else I’m doing. In this case, I was listening to the Earwolf podcast Factually!, and Adam Conover’s interview with Celeste Kidd of UC Berkeley regarding how we form our beliefs. One point made is that humans often believe strongest in the first thing that we here, especially if it fits our preconceived notions. If it fits, and we think it covers all the facts, we are no longer curious and no longer accept other answers. That clearly is the case when we look at school shooting violence: the subject is so uncomfortable and scary that we often don’t want to dive deeper into the causes of the problem. So we tend to latch on to the first plausible solution and answer: it is the access to guns; it is anger from videogames; it is mental illness; it is bullying; it is …

One of the things that Columbinus does is show that, perhaps, it isn’t just one factor. As you watch the show, there likely wasn’t a factor that, if absent, would have stopped the shooting or stopped some form of anger in violence. It was a number of factors coming together that created the problem. It also demonstrates that there isn’t just a single factor in the solution set. There are numerous pieces to the risk reduction puzzle, ranging from limiting access to guns to increased mental health care, to reducing the stigma of receiving threatment for mental health, addressing the anger in society. Each of these pieces of the cause and solution puzzle are vital to building the complete picture.

The performance of the ensemble in this production, under the direction of Audrey Lauren Wax, does a skillful job of realistically portraying a wide variety of students. Their performances build through the production allowing the audience to connect with the various types of students at the school. While listening to the conversations during the intermission, I was hearing that impact. I heard patrons referencing the fact that they were the loner in high school, that they identified with the jock or the nerds, that they saw themselves in those kids.

Overall, I found this a compelling production. Was it entertaining? I hesitate to say that, as how can one find a real-life tragedy “entertaining”. Illuminating might be a better term, and that term fits with one of the functions of theatre in society. LIve performance and story telling exists not only to entertain us, but to inform us. From the first performances by early man of the hunt, providing warnings and guidance to other hunters, or philosophical productions that explored the meaning of why we do what we do, theatre has illuminated society and forced us to ask us “Why?”. This is one of those productions, and for that reason, I think it is something that (if you can handle the subject matter) is worth seeing.

The ensemble of this piece does an excellent job. The ensemble consisted of: Joe Bondurant (FB), Noelle Grapentine-Benton (FB), August Hirschboeck (FB), Ryan Jorenby (FB), Alan Lau-Brown (FB), Ariana Manghera (FB), Shawn D. Padley (FB), and Emma Sorenson (FB). Special acknowledgement goes to Joe Bondurant (FB) and Shawn D. Padley (FB), who do a wonderful job of capturing the anger, illness, and backstory of the protagonists of the story. But the entire ensemble is excellent. (Edited to correct the actor who played Dylan)

On the production and creative side, the staging was well done (especially for the college level). There was a simple set of some movable lockers and fencing, with a black board in the background, and what looks like a gym floor (but with chalkboard paint). There are movable tables and chairs, and appropriate props for the story. All of this was designed by Christopher Dunham, supported by the props from the props crew of Noelle Grapentine-Benton (FB) and Margo Skolaski. The costumes, designed by Mary Waldhart (FB), seemed appropriate for the period and the situation. Movement was orchestrated by Kristin Roling Choreographer and Alan Lau-Brown (FB) Fight Captain. About the only quibble was with one aspect of Alice Combs (FB) lighting design: during the Guidance Counselor visits, some of the yellow leikos were going on and off for no reason to support the story. Maddie Budner (FB)’s sound design provided the appropriate sound effects. Rounding out the production credits: Rachel Seizer (FB) Assistant Director, Stage Manager; Lily Pero (FB) Asst. Stage Manager; Cassie Carney (FB) Hair and Makeup Designer; Jade Proctor (FB) Video Designer; Audrey Lauren Wax Box Office Manager; Ariana Manghera (FB) Dramaturg; Patricia Hersch Original Dramaturgy; PJ Paparelli Conception; and loads of students in the various supporting crews and work studies.

If you can handle the subject matter, Columbinus is well worth seeing. Tickets are available at the door or through the Edgewood College Theatre Online Ticketing. Alas, my usual discount ticket outlets don’t work in Madison.

I have one more show in Madison (although I may not be writing it up):  MST 3000 at the Overture downtown.