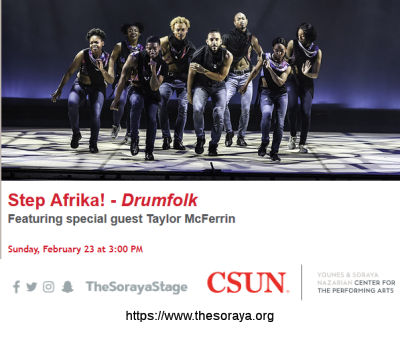 As I’ve indicated before, I don’t always write up the live performances that we see at the Soraya/VPAC (FB). Sometimes, this is because they are concerts (where I don’t have a set list in advance) and I don’t know the names of all the pieces. Other times, they are performance pieces, such as the recent astounding “Hotel” from Cirque Eloize, which had to be seen and just no written description could fit. But sometimes we see a piece that deserves a writeup. Step Afrika!‘s piece “Drumfolk”, which we saw Sunday afternoon, as such a piece. For those unfamiliar with Step Afrika!, is it a professional company dedicated to the tradition of stepping — a dance form that uses the body as a percussive instrument. The company promotes stepping as a contemporary dance genre, using that art form to creates programs that expand on stepping’s unique place in history, and often doing a deep exploration of the African-American experience.

The heart of Drumfolk was an exploration of the Stono Rebellion of 1739, a revolt initiated by 20 enslaved Africans in the colony of South Carolina. In response to the rebellion, colonial leadership got the crown to pass the Negro Act of 1740. The act made it illegal for enslaved Africans to move abroad, assemble in groups, raise food, earn money, and learn to write (though reading was not proscribed). Additionally, owners were permitted to kill rebellious slaves if necessary. The Act remained in effect until 1865. It also singled out drumps as an illegal weapon, and took away the right for slaves to own or play the drums. However, as the program for the show noted, “They took the drums away… but they could not stop the beat.”

The program that we saw (which evidently was recently designed … something like 4 days before our performance) consisted of three pieces:

Overall, I found this to be a very enjoyable and informative presentation.

This was the only performance of Step Afrika! at the Soraya this year.

As for the last weekend of February, I’ll be in Madison WI visiting my daughter, the the lineup she has scheduled is busy: The Revolutionists from Mercury Players Theatre/Bartell Theatre on the UW Madison campus on Friday (Eileen Evers is an alternative); the Lee Blessing play Down The Road from Two Crows Theatre Company on Saturday (columbinus at Edgewood College is the bad weather backup), and MST 3000 on Sunday. Whew! Alas, I’ll be missing both Nefesh Mountain at Temple Israel of Hollywood and Tom Paxton and the Don Juans at McCabes due to this.