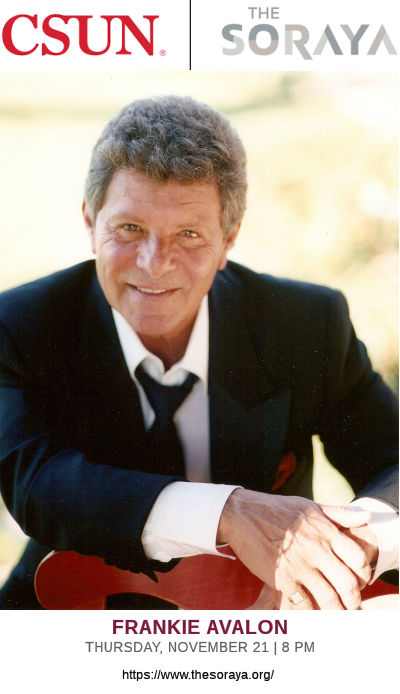 Tom Paxton often says about nostalgia that it is OK to look back, as long as you don’t stare.

Thursday night, when we saw Frankie Avalon at the Soraya/VPAC (FB), it felt like it was a staring contest — there was that much nostalgia. Admittedly, Avalon’s long career — dating from the 1950s to today, can lend one to nostalgia. Admittedly, the age of the audience made that nostalgia successful (we were some of the younger folks there). But the show was dripping in nostalgia none-the-less.

I didn’t scribble down a set list, but just get the latest Everly Avalon (i.e., Edan Everly and Frankie Avalon) album “The Good Old Days”, and you’ll have much of the show. I do have a few observations I want to share, however… I’ll note that overall, the show was enjoyable and a trip down memory lane.

But, as I said, musically the show was a load of fun. It was a very fast 90-110 minutes. But don’t go expecting anything newer than “Beauty School Dropout”.

November concludes with Bandstand at Broadway in Thousand Oaks.

December is getting busy, given that we lose two weekends to ACSAC, and the small theatres are often darker around the holidays. The weekend after ACSAC brings an outing of our new live theatre group at our synagogue to Eight Nights at the Anteaus Theatre Company (FB).  I also have a hold for December 21 for Elf at Canyon Theatre Guild.

Looking to early 2020: most of the January is currently quiet, but the middle of the month is busy, with What The Constitution Means To Me at the Mark Taper Forum, and Frozen at the Hollywood Pantages (FB) the third weekend, and Cirque Éloize at  the Soraya/VPAC (FB) the last weekend. Things start heating up in February, with The Last Ship (with Sting) at the Ahmanson Theatre the first weekend; A Body of Water at Actors Co-op (FB) and It Shoulda Been You at Musical Theatre Guild (FB) the third weekend; and (whew!)  The Simon and Garfunkel Story at the Hollywood Pantages (FB), Escape to Margaritaville at the Dolby Theatre/Broadway in LA (FB), and Step Afrika at the Soraya/VPAC (FB) the fourth weekend. Yes, that is the Pantages and the Dolby the same day — that’s what I get for not entering season tickets on my calendar before ticketing a bonus show. March comes in like a lamb, with the first two weekends (2/29 and 3/7) being quiet… but goes out like a Lion. The 2nd weekend brings the MRJ Man of the Year dinner; the 3rd Morris’ Room at Actors Co-op (FB) ; and the last bringing Spongebob Squarepants at the Dolby Theatre/Broadway in LA (FB) and the MoTAS/TBH Seder. April is similarly busy: the 1st weekend is Mamma Mia at 5 Star Theatricals (FB); the 2nd is during Pesach and is open (but has Count Basie at the Soraya/VPAC (FB) the Thursday before); the 3rd is Once on This Island at the Ahmanson Theatre; the last is Hamilton at the Hollywood Pantages (FB), and the first weekend of May is Mean Girls at the Dolby Theatre/Broadway in LA (FB)