Sunday brought the end of the Hollywood Fringe Festival (FB) and our last two Fringe shows. The first was traditional theatre, ideally suited for a Fringe venue as it started life as a Fringe submission. The second was an example of the wackiness that is Fringe. 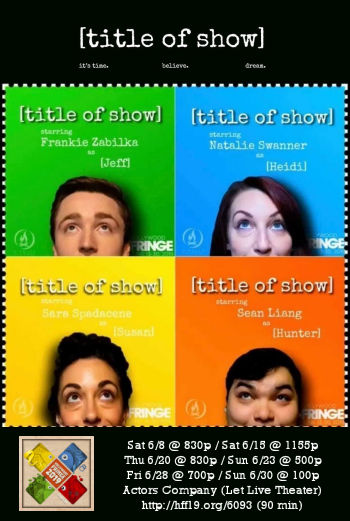 We last saw the musical [Title of Show] just down the street from where we saw it Sunday almost 9 years ago, when Celebration Theatre was still in the space that became the pot shop. Back then, I wrote the following, which still applies (with some slight edits):

The show really does tell the story of its creation. Two Broadway-geeks (Jeff and Hunter) want to submit to the festival, and realize that their playful conversations are more fun than any fictional ideas, so they run with it. They bring in two of their theatre friends (Heidi and Susan) and an orchestrator (Mary), and off they go. The result is a curious mishmash that illustrates the creative and development process from the birth of an idea to the point it reaches Broadway, and along the way numerous popular culture, and even more Broadway show references are thrown around just for fun. Once presented at the festival, the show creation didn’t end, for it was updated to reflect its subsequent life Off-Broadway, on the Internet, finally getting to the point where it was mounted on Broadway (and thus, it contains some songs not on the Off-Broadway Cast Album).

As with any meta-discussion, the show plays on a number of levels. The basic story of its creation is entertaining, although there could have been some tightening in the post-Off-Broadway portions, where it got a bit dark and slow. The continuous barrage of obvious and non-obvious references is entertaining to the theatre-geek like me, but probably totally missed by much of the audience. This show has a bit of a gay theatre vibe, as Jeff and Hunter are gay. Of course, if you’re a straight theatre geek you squirm a bit, especially when they go on about the collection of Playbills and Programs that they have (and yes, I must admit to keeping all my programs as well). The music of the show is quite entertaining and engaging, although only one or two of the songs work well outside of the show: “A Way Back to Then” and “Nine People’s Favorite Thing”. The last song is perhaps the mantra of the show… and perhaps a good mantra for life: “I’d rather be nine people’s favorite thing than 100 people’s ninth favorite thing.”

The book of show is unchanged from the world premere we saw back in August 2010, and so the above still applies. The performance and venue — i.e., as part of a Fringe show, apply better. This is a show that should be done on a shoestring, and this production reflected that. A few chairs. Some cheap props. The actors also seemed well suited to the show. Sean Liang (FB) provided a very schumpy Hunter, which really fit the character better than the buff Hunter of 2010. Frankie Zabilka (FB)’s Jeff was also a very normal guy with a pleasant voice who captured the character well. These really seemed like two friends that could write a show. As for the ladies, Natalie Swanner (FB) was outstanding as Heidi, with a remarkably strong singing voice and great stage presence. Lastly there was Sara Spadacene (⭐FB; FB) as Susan, who was equally strong and sang great. Providing the musical accompaniment (as well as a few lines) was Sandy Chao Wang (FB) as Mary.

The production was directed by Dylan Moon (FB); Devin O’Connell (FB) was the stage manager. It was an O’Kelly Campfire Production.

Overall, this was a great production of [Title of Show] that was in the perfect venue: A fringe theatre. Great performance, an always fun story, loads of references for the theatre geeks (who likely already had the show memorized).

As Fringe has ended, there are no more productions of show unless they get an encore extension. Luckily, these show did, and will have one more performance on Fri 7/5 at 9:45pm. Tickets are available through the Fringe website. 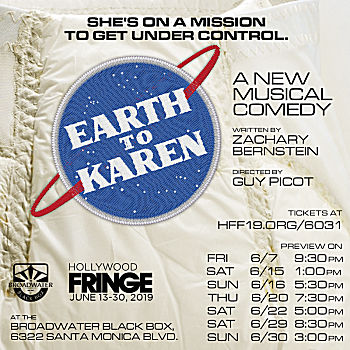 Our last Fringe show, Earth to Karen, was a very Fringy show. Remember the story, back in 2007, of the astronaut Lisa Nowak? For those that don’t, here’s what Wikipedia has to say:

Immediately following [fellow astronaut’s] William Oefelein’s divorce, he and Lisa Nowak became involved with each other. Their affair lasted two years, with Oefelein beginning to break it off gradually near the end of 2006. It was during this time that Oefelein started a relationship with Colleen Shipman, who was working as an engineer with the 45th Space Wing at Patrick Air Force Base, Florida. Nowak drove from Houston to Orlando, Florida, on February 4–5, 2007. She packed latex gloves, a black wig, a BB pistol and ammunition, pepper spray, a hooded tan trench coat, a 2-pound (0.91 kg) drilling hammer, black gloves, rubber tubing, plastic garbage bags, approximately $585 in cash, her computer, an 8-inch (200 mm) Gerber folding knife and several other items before driving the 900 miles (1,400 km) to Florida. Early police reports indicated she wore Maximum Absorbency Garments during the trip, but she later denied wearing them.

As author Zachary Bernstein (FB) , Nowak (renamed to Karen Spitz) is trying to recover her life in Houston after the infamous event. She’s reduced to applying for work at Subway as a Sandwich Artist, but is still living with her sister. But Subway, she learns, is just hiring her so they can trade off her notoriety.  But with no better choices, she accepts. There she meets Chet, a fellow sandwich artist. He has a special interest in baloney, and wants to open a sandwich shop that specializes in only baloney sandwiches. She agrees to help him. But when her sister, Alice, discovers that Chet is heir to a baloney fortune, she decides to sink her teeth into him. And the rest… is a musical.

Yes, it is as silly as it sounds. The story was a clever idea stretched to a Fringe show. The music, also by Zachary Bernstein (FB), is entertaining but not particularly memorable afterwards. It is an entertaining show, but very much something that [Title to Show] refers to as “Donuts for Dinner”: It sounds like a great idea, but you’re still hungry for nutrition afterwards.

The performances were strong, in particular Dagney Kerr (⭐FB) as Karen. She had a great singing voice and a very funny personality that kept the entertainment together. Also strong was Matthew Bohrer (FB) as Chet. Supporting these two in multiple roles were Rebecca Larsen (FB) Alice / Tracy and Lauren Van Kurin (FB) as Jen / F.C. / Dutch. Music was provided by an on-stage band consisting of Eric Radoux (FB) Bass; Gordon Wimpress (⭐FB) Guitar; and Zachary Bernstein (FB) Drums.

The production was choreographed by Sarah M. Kruger (⭐FB, FB), and directed by Guy Picot (FB). Jim Pierce (FB) was the Graphic Designer. There was no credit for the stage manager.

This was a cute and entertaining show, but doesn’t really have a life beyond Fringe. It is, essentially, an extended musical comedy sketch without significant depth. Donuts for dinner, as it were.

Although the Fringe Festival has ended, the show has received a one performance Fringe extension on Sun 7/7 at 5:00PM. Visit the Fringe website for tickets.

Early September is also mostly open. Then things heat up, with the third weekend bringing Barnum at Musical Theatre Guild (FB), and the fourth weekend bringing Miss Saigon at the Hollywood Pantages (FB). October starts with The Mystery of Irma Vep at Actors Co-op (FB), and concludes with Mandy Gonzalez at the Soraya/VPAC (FB).  Yes, there are a lot of open dates in there, but I expect that they will fill in as time goes on.