The penultimate day of the Hollywood Fringe Festival (FB) (I do like that word). Three shows, that again show the breadth of Fringe. From clowns playing around on a stage, to an inscrutable one-person show, and finally a well-realized new adaptation of a book. This is Fringe in the full range of strange and glory. 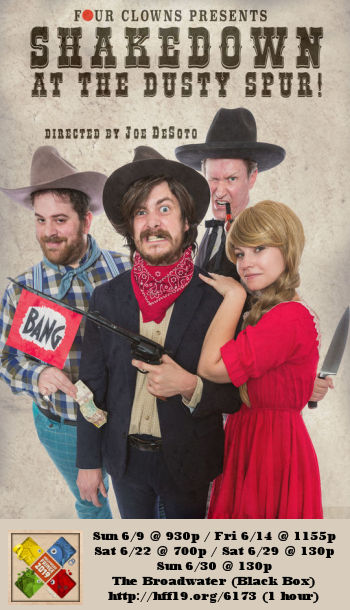 Many years ago we saw an intriguing production of Hamlet, done by the Four Clowns theatre company. Now, when you think clowns, do think of clowns in the noun form, ala Bozo or Chuckles or those numerous TV hosts. Think clown as the verb: people who revel in clowning around and having fun, and you have the basis of Four Clowns. This is an extremely inventive company that like to have fun with everything. You need to like their style (I do), and be in the right mood to be receptive for it (I always am, my wife wasn’t).

The basic outline of Four Clowns Present: Shakedown at the Dusty Spur is simple, and almost borders on the melodramatic: Papa Maynard has died, and has left the Dusty Spur Saloon to his eldest and only son, Ike Maynard, bypassing the smarter older daughter Marybeth, and leaving only a little to the youngest daughter Maybelline. The villains, Dallas Devereaux and his assistant Logan Lesserman, plot to get the saloon so they can burn it to the ground and fulfill a promise. They do this by swindling Ike, so the children arrange to get “the good buy” Colt “The Corpse” McCoy to fight their battle. But he lives up to his name, and they need to figure out what to do next to get their bar back.

There was plenty of audience participation (if you don’t like that stuff, don’t sit in the first row). There was loads of improvising. The general attitude was that of fun and improvisation — clowning around, as one might say.

Under the direction of Joe DeSoto (FB), artistic director of Four Clowns, all of the performances were strong. The cast consisted of Tommy Fleming (FB) Dallas Devereaux; Turner Frankosky Ike Maynard; Elisabeth Hower Marybeth Maynard; Benji Kaufman (FB) Logan Lesserman; Liz Morgan (FB) Maybelline Maynard; and Jason Poston (FB) Colt “The Corpse” McCoy. Of these, my favorites were Kaufman and Morgan, who were quite a lot of fun to watch.

As the official Fringe Festival has ended, you’ll need to check the Fringe Website to see if the show has been extended. Currently, it looks like there are two extension performances: Fri 7/5 at 9pm, and Sun 7/7 at 10:30pm. I found this to be a really funny somewhat improvised show, with lots of clowning around. Depending on your love of clowning (independent of the traditional notion of clowns), YMMV. 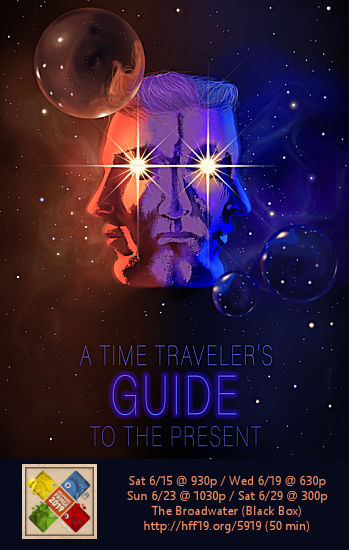 The second show we saw on Saturday was A Time Travelers Guide to the Present. This show held such promise. The show description was:

With humanity’s fate on the line, a secret society of astronomers recruits volunteers for the world’s first time travel flight. We follow one traveler as he is catapulted on a journey through the cosmos. What begins as exploration of the mechanics of spacetime travel turns into a desperate hunt for connection. This is a one man show that mixes science, sci-fi, music, and storytelling to explore what it means to be worthy of love.

The show, which was written, performed, produced, and composed by Doug Harvey (FB), turned out to be a bit more incomprehensible. A message is received from the future, and so someone is recruited to go forward in time to stop it. Our intrepid hero is the selectee, and what then follows is the mission, with lots of time travel back and forth, reminiscent of the end of 2001: A Space Odyssey, and about at times as incomprehensible.

On the positive side, the music was great and relaxing.

The production was directed by Jake Elitzer (FB), and Rebecca Schoenberg (FB) was the Production Stage Manager. Other producers were Annie Chang (FB) and Kristina Mueller (FB). Poster art by Estevan Guzman (FB).

As the official Fringe Festival has ended, you’ll need to check the Fringe Website to see if there are any extensions. Right now, there are none shown. We found the show confusing, but the music was great. 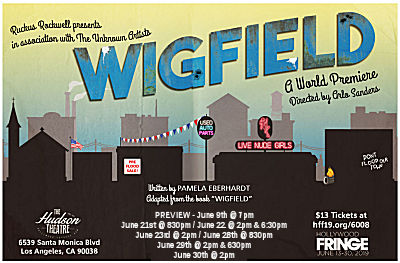 The last show we saw on Saturday was one of the best and most humorous shows of all the shows we saw. It was Wigfield, adapted by Pamela Eberhardt (FB) from the satirical novel Wigfield: The Can-Do Town That Just May Not written by Amy Sedaris (FB), Paul Dinello, and Stephen Colbert. The best description I found of the novel was from this site:

In order to prevent the dam’s removal, the residents will have to prove that they’re not just a bunch of itinerant squatters and that Wigfield is indeed an actual town. Fortunately for them, “journalist” Russell Hokes arrives in “town” to get material for a book he’s supposed to be writing about the “brave lives of small-town residents… that celebrates what is best in America by showing the indomitable human spirit in times of crisis”. Hokes unwittingly ends up chronicling the Wigfield citizenry’s last days of living life as they’d known it for so long. He also learns a lot about life, love, and the ecdysiastic arts.

The stage version, as written by Eberhardt, sticks with this pretty closely. We meet Hokes at the beginning, as he gets an advance to chronicle a small town. He discovers Wigfield, and the game (and strangeness) is on. We meet the town inhabitants, each stranger and more off-beat than the next, and begin to learn of the dilemma … and the game, for the notion seems to be that if they can become a town, then they can get relocation payments due to eminent domain. But the resolution becomes more of a “be careful what you wish for”.

In the end, this becomes a cleverly disguised commentary on the weirdness of small towns and how they accept the off-beat; the whole process of eminent domain, and finally, the idiocy of FEMA.

I found the production extremely funny and extremely well done. I originally went to see it because we knew someone in the cast from our days subscribing at REP East in Santa Clarita. I left thoroughly entertained.

As the official Fringe Festival has ended, you’ll need to check the Fringe Website to see if there are any extensions. Right now, there are none shown.