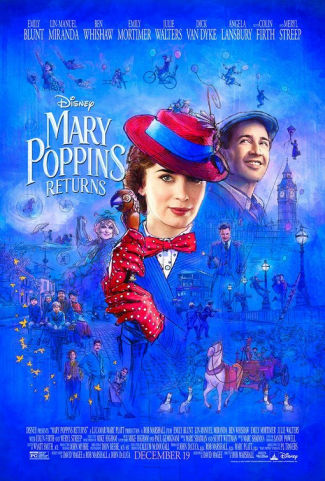 Christmas Day is special. No, not for the reason you think. It is the one day each year when we eschew live performance for filmed. This year’s selection: Mary Poppins Returns.

I was four when the original Mary Poppins movie was first released, and I’m sure I saw it in theaters sometime thereafter. I don’t have much memory for the movies I saw when young. But I know I was familiar with it from repeated viewings over the years, and it fit well with my musical loves. After all, what kid didn’t love the classic Sherman and Sherman tunes.

However, there was one person that didn’t like the original Disney version: the author, P. L. Travers. As captured in the movie Saving Mr Banks, she was very disappointed with how Walt Disney treated her character.  She didn’t like Dick Van Dyke (she had wanted Laurence Olivier); she thought Julie Andrews was too pretty, sweet, and saccharine. She hated the music. You can find more information about her here.

Although most children these days are unfamilar with her work, Travers wrote 8 books about Poppins, starting in 1934. They present someone much less saccharine than the Disney nanny. As one page noted: Travers tapped into a rosy revisit of her childhood—the aptly named Mr. Banks is a banker (though not a drunk), the mother is flighty (but not suicidal), and Mary Poppins, like Travers’s great-aunt, is the Banks children’s caring if unsentimental ballad, “tart and sharp.”

I’m also familiar with the subsequent theatrical version, with added music by George Stiles and Anthony Drewe. In 1993, theatrical producer Cameron Mackintosh met P.L. Travers and acquired the rights to develop a stage play adaptation of her Mary Poppins books. She only agreed to a stage production as long as the creators were all English, and included no one who had worked on the film. She died in 1996. In 2001, Mackintosh and the head of Disney Theatrical Thomas Schumacher opened talks on a possible collaboration, so that the stage play would be able to use the songs from the Disney film. With both sides committed, a preliminary outline of the show was written in 2002. The theatrical version drew on some themes from the movie, some stories from the books not included in the movie, and changed the timeframe somewhat.

This is all a long-winded way of saying that Mary Poppins, like the women herself, is a complicated property. The new film, Mary Poppins Returns, has to be viewed in relationship to the original books, to the original beloved Disney film, and as a standalone property for those without prior context.

I think, on all three measures, it falls short. That’s not to say the music isn’t good, that there aren’t some wonderful performances, or that it isn’t enjoyable. Rather, it is to say that it doesn’t fully capture the magic of the original — in short, it tries to hard. It doesn’t capture the Mary of the books, for this Mary is too much the center. And as a standalone, it drags at times and has various continuity errors. But there is many the flawed property that takes on a life of its own, and in spite of its flaws, becomes timeless. Look at the musical Wicked, which didn’t garner great reviews at its opening. Newsday wrote of the original: “Whew! Hard to swallow and, after an hour or so, hard to sit through. There is nothing wrong with good, clean fantasy, if there is some sort of explanation to make it more than just a succession of camera tricks.”  What will be the long term verdict here? Hard to say.

I think the biggest problem with the story was that it suffered from sequel-itis — a common stage problem where you attempt to repeat what worked in the original, to lesser effect. Let’s jump into an animated thing. Let’s have a big dance number with a British worker class. Let’s have a mystery old woman. Let’s have a crotchety old banker. Let’s have a sequence with a crazy relative. When sequels work and surpass the original is when they find a new story with the known characters, not when they repeat the old story This had too much repetition of the old (or seeming repetition).

With respect to the story, it is a sequel to the original, and drew on elements of the stories found in the books Mary Poppins Comes Back (for her entry on the kite, the balloon lady, the entry into the Royal Daulton dish, and the subsequent repair with Topsy Turvey). But other elements were new: moving up a generation to when Jane and Michael were adults; the foreclosure subplot; and some of the more fantastic elements that seemed to be showing off the new animation techniques. I think the story, for the most part, worked satisfactorily. At times it dragged, and at times it seemed to suffer from what Newsday noted: “a collection of camera tricks” — in other words, the events moved from vignette to vignette, where each vignette seemed more designed to thump a lesson into little heads than to advance character or plot.

Further, there were times in the story where the characters turned and focused on the specialness of Mary Poppins: let’s get her on the stage, let’s get her to sing, let’s get her to do the magic. I’m not sure Travers would have been happy with that notion; it grated at me as a problem for a nanny that didn’t want to draw attention to herself. Yet she was also a very vain woman, so would that have appealed to her vanity?

Music-wise, the tunes were no Sherman/Sherman collaboration. Sherman and Sherman had a distinct feel to them; we saw a new Sherman/Sherman show at the end of 2017 in the LATC production of Levi! (CD is available). S/S songs were hummable; they were earworks that stuck with you. Stiles/Drewe of the theatrical version also created tunes in that style; it would have been nice to see if they could have done the movie. Homage, as it were. I tend to like Shaiman and Wittman‘s music — they did Hairspray, and Cry Baby – The Musical, and Smash, and Catch Me If You Can, among others (and are working on a Some Like It Hot musical). They did a reasonable job here — some songs were good, and I’m looking forward to getting the album. They didn’t hit it out of the park like the original, alas. I did appreciate the use of the Sherman/Sherman songs as underscoring.

The performances were very strong. Emily Blunt‘s characterization of Poppins was different from Julie Andrews, but worked. She captured the additional vanity and brought a bit more of an adult womanly tinge to the character — a little  less sweet, as it were. Lin-Manuel Miranda was strong as Jack, proving his versatility as a performer as well as a musical theatre star. But who I really liked was Emily Mortimer‘s Jane. She brought a magic to that character that shone whenever she was on screen.   She also had a strong chemistry with Ben Whishaw‘s Michael Banks.

In terms of the children: Pixie Davies (Anabel), Nathanael Saleh (John), and Joel Dawson (Georgie). Most were, well, children, but I was really taken with Davies’s Anabel. She brought a knowingness and sly smile to the character that reminded me a bit of Audrey Tatou’s Amelie. Great performance.

Moving to some of the baddies and specialty characters (and smaller roles). Colin Firth‘s evil banker was a bit too cartoonish and over the top. Julie Walters‘s Ellen was a bit better, and a nice homage to the befuddled original. Meryl Streep can have fun with any roles, and she enjoys the comic ones — so she nailed her Cousin Topsy. And as for Dick Van Dyke and Angela Lansbury — well, they steal the show with their talent.

As I noted, there were a number of continuity problems (like what happened to the briefcase when they went to visit Topsy). But I’m mentioning continuity now because of the required PC casting. Not surprisingly, there was color blind casting — one would have to in this day and age. Would a British bank in the 1930s have hired like that? Unclear. Would there have been mixed couples in the UK then? Again, unclear. However, the casting did jar one out of the timeframe — and that was a bit more of a problem. Finding the right balance in a period piece is hard. Speaking of jarring — I agree with one critic I read that the BMX bike stunts were unnecessary and seemed out of place for the period. They could have been cut with no loss of value.

Technically, the animated sequences were top notch, and I appreciated the use of hand-drawn vs. computer animation. I also liked the costumes in the china sequence, which had me wondering if they were painted on or real costumes.

Summing things up: Is this worth seeing? I think so. It will likely become a classic; it has strong performances and good music. It isn’t to the level of the original, but that doesn’t make it bad on its own.

And with that, our theatrical (live and film) year of 2018 comes to a close. May your 2019 be filled with spectacular and memorable performances.