On top of all the highway page updates I’m doing, there’s one more element that makes June an incredibly busy month:  the Hollywood Fringe Festival (FB). For those unfamiliar with the Fringe Festival, there are over 350 different shows occurring in the heart of Hollywood, with most along the stretch of Santa Monica Blvd from Western to W of LaBrea, and between Hollywood Blvd and Melrose. The shows run from 5 minutes to 2 hours, from one person shows to gigantic casts, from mimes to musicals. They have one — and only one — thing in common: they have to be able to load into a theatre in 15 minutes or less, and get out afterwards in the same time. You never know what you will see: it could be complete crap, it could be the start of a major new show. The shows and scheduling thereof are a nightmare to coordinate, but you could easily end up seeing four to five shows in a day. However, you can be guaranteed of a good time. 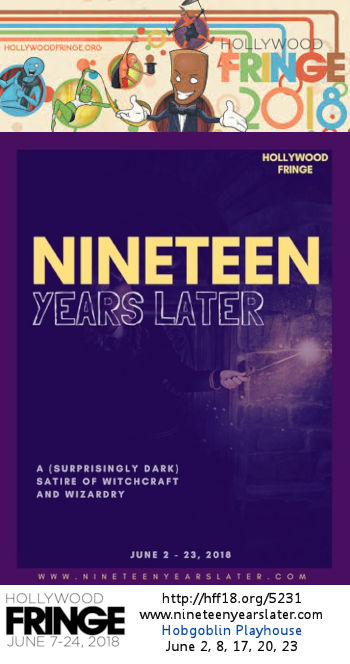 Our first day of Fringing started with two Harry Potter-themed shows, although both were careful not to use that magical name so as not to run into the Voldemort of the entertainment world — the trademark aurors. Our first show, Nineteen Years Later: A (Surprisingly Dark) Satire of Witchcraft and Wizardry (HFF18) (FB) was what might be best characterized as a surprisingly good extended fanfiction in the “Boy Wizard”-universe.

We join Harry Potter, Ron Weasley and Hermoine Granger Weasley 19 years after we left them. They all have children headed to Hogwarts. But things are amiss, wizards are disappearing and turning up dead. All must overcome old rivalries and create new friendships if they are to figure out who is behind this and stop them.

The description on the show’s actual website gives a bit better of a description:

When Albus, middle child of famed Boy-Who-Lived, doesn’t quite measure up to expectations, his life becomes a series of seemingly never-ending blunders. Isolated, his sole friend the child of his father’s first enemy, Albus finds connecting with those around him nearly impossible. Enter Cecilia, an American exchange student, and a woman who will challenge everything Albus knows – or thought he knew.

This is a very short description for what turned out to be a 26 scene, two-act (with intermission) full-length play about the children of Harry and Ginny Potter, Ron and Hermoine Granger Weasley, and other well known characters going off to Hogwarts. But Harry’s middle son isn’t quite the success his father is: he is sorted into a house he doesn’t want, doesn’t acquire a lot of friends, and the ones he does acquire are either annoying or problematic. Yet, as in the original story: there is a mystery to be solved that ends up bringing the groups together and finding inner strengths. I don’t want to say too much more, as it might give away some of the twists. But suffice it to say there’s lots of magical fighting, a few love scenes, some unexpected relationships, and some different drawing of frendship lines.

The production was directed by Kate Hart (FB), who also handled marketing. It was written by Kena Worthen (FB), who also produced the show and did the costumes.

As we left, our conclusion was that this was a pretty good piece of fan fiction, well performed. If you are into, or at least familiar with, the HP-universe (and I don’t mean the printer), it is well worth seeing. 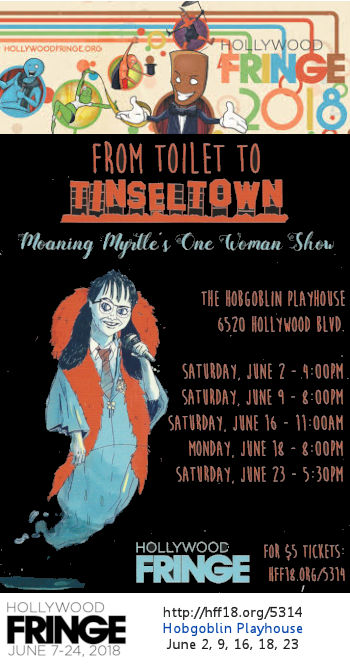 For our second Fringe show, we went from a large cast show with a program, to a one person show with a postcard.

From Toilet to Tinseltown: Moaning Myrtle’s One Woman Show was exactly that. Here’s the Fringe description:

Moaning Myrtle, everybody’s favorite ghost from the Harry Potter series, was forced to leave her toilet at Hogwarts years ago. After failing in the UK for a bit, she decided to come to LA for her shot at fame … or something like it. This is her dark and comedic one woman show, her chance to finally be seen (figuratively, of course).

As Moaning Myrtle, Maddie Patrick (FB) (who was also the author) was hilarious. Floating around the stage on her hoverboard, she was everything you would expect a 14-year old ghost who had started a stand-up career would be. She described how and why she was kicked out of the toilet at Hogwarts, and how she went around London. She eventually made her way to Hollywood, where she met the sort of people you would meet in Hollywood, where she fit in well (having no substance). After trying to get started in acting, she eventually made her way to Las Vegas, beginning a career in standup. During the show, she dished not only on her past life, but on people in Hollywood as well as Las Vegas. It was a thoroughly entertaining show.

Ms. Patrick captured the attitude of the ghost well — petulant at times, playful, childish, but with surprisingly astute observations. It was a strong characterization and performance.

Production values were simple: A single costume, a hoverboard, and a microphone.

The production was directed by Patrick Albanesius.

I should note that there is a ticketing discount available if you see both shows, although we didn’t know about it going through the Fringe website. So it goes. 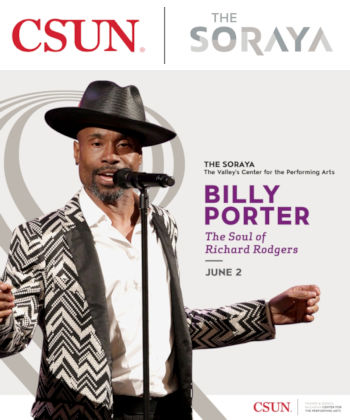 Our last show of the evening was not a Fringe show. Back in March we were supposed to see Billy Porter: The Soul of Richard Rodgers at the Soraya [nee the Valley Performing Arts Center (VPAC)] (FB). But due to other commitments, it was rescheduled to the first Saturday of Fringe, which then resulted in having to move our tickets to The Color Purple (Hollywood Pantages (FB)) to next Saturday, meaning two musicals that day. Time travel is a horrible thing, as we learned today at The Universe (101), but that’s the subject of another post.

If you’re not familiar with Billy Porter (FB), he’s the fellow who made famous the role of Lola in Kinky Boots on Broadway. Broadway star… Richard Rodger … this is going to be a nice evenings of Rodgers ballads. Isn’t It? Isn’t It?

The key word in the title was not “Richard Rodgers”, but “soul”. This was a soul and R&B treatment of Rodgers, loud and with loads of bass. We were able to get some 25db foam earplugs from the ushers, but it was still too loud for my wife. I think it was also either too loud — or too political — for some in the audience, who left during the show. Their loss.

For those who stayed, we were treated to a wonderful soul/R&B show. The program was:

Needless to say, except for the Kinky Boots Medley, these weren’t your traditional treatment of Rodgers. The show was also strongly political — Wash That Man was a pointed video about Trump’s election and his reaction thereto, and the subsequent song, Carefully Taught, was even more relevant today. There was a strong emphasis on needing to restore what we had and to RESIST.

We liked the message. I think some didn’t. But we need to shock the comfortable.

Billy Porter was backed by a four piece band consisting of Jordan Peters on guitar, David Cutler (FB) on bass, Zach Mullings (FB) on drums, and Christian Almiron, on keyboards and as music director. Michael “Lofey” Sandlofer was the Executive Music Director. “Lady and the Trump” featured a special appearance by Zaire Park. There were backup singers, but they were uncredited and not introduced. Bad form in my book.

This was the last performance of the Soraya 2017-2018 season. We’re in the process of planning and scheduling our next season.

Ob. Disclaimer: I am not a trained theatre (or music) critic; I am, however, a regular theatre and music audience member. I’ve been attending live theatre and concerts in Los Angeles since 1972; I’ve been writing up my thoughts on theatre (and the shows I see) since 2004. I do not have theatre training (I’m a computer security specialist), but have learned a lot about theatre over my many years of attending theatre and talking to talented professionals. I pay for all my tickets unless otherwise noted. I am not compensated by anyone for doing these writeups in any way, shape, or form. I currently subscribe at 5 Star Theatricals (FB) [the company formerly known as Cabrillo Music Theatre (FB)], the Hollywood Pantages (FB), Actors Co-op (FB), the Chromolume Theatre (FB), a mini-subscription at the Soraya [nee the Valley Performing Arts Center (VPAC)] (FB), and the Ahmanson Theatre (FB). Through my theatre attendance I have made friends with cast, crew, and producers, but I do strive to not let those relationships color my writing (with one exception: when writing up children’s production, I focus on the positive — one gains nothing except bad karma by raking a child over the coals). I believe in telling you about the shows I see to help you form your opinion; it is up to you to determine the weight you give my writeups.