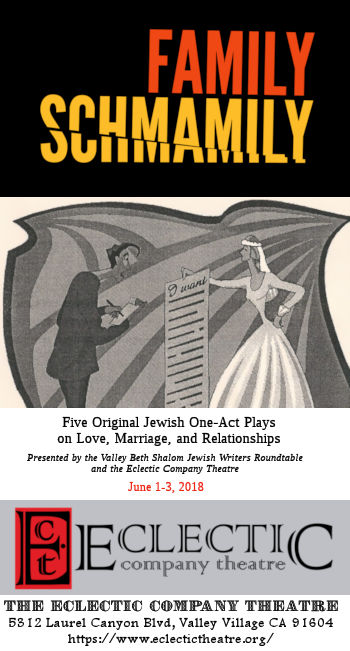 This seems to be a bad year for small theatres in Southern California. Last month,  Chromolume Theatre (FB) announced that their landlord had kicked them out of their space at the end of May; luckily, they were able to find space at the Hudson Theatre (FB) in Hollywood to finish out their season. Reading the news last weekend, my wife discovered that this was happening to another long-time company in North Hollywood: Eclectic Company Theatre (FB). They need to be out by early June; the building will be demolished, but the company has plans to continue… somehow. Their final production in the current location was to be Family Schmamily, a series of five one-act plays developed by the Valley Beth Shalom Writers Roundtable. Translation of all of this: Last night, I set aside the work on the highway pages for my other love, theatre, to see this final show at Eclectic in North Hollywood (don’t worry, roadgeeks, I’ve been doing some more edits this morning, but expect more interruptions due to the beast that is the  Hollywood Fringe Festival (FB)).

The evening didn’t start well, because there was a large boisterous party of older Jewish ladies (I’m guessing friends of some in the cast) who were busy chatting with their friends, constantly switching seats, complaining about the view, complaining about… Let’s just say they established the stereotypes we would be seeing in the first two mini-plays.

As for the five plays themselves, they were hit and miss. I’ll go through them in order, but there were only two that we liked. The others all played up stereotypes to the points of being annoying. Reading the bios, these were coming from skilled writers — so I guess this is an issue of a “first outing”, and these one-acts needing a lot more polishing. In some ways, especially given the minimal staging, these shows might have fit much better at the Fringe Festival across the hill in Hollywood. I’m not sure the future lives of these — few of them seemed to fit well into a story that could be expanded beyond the 10-20 minute playlets.

The first play, Franny and Fidelia, was written by Beth Polsky (FB), and featured Leda Siskind as Franny and Marilyn Lazik as Fidelia. The story was about two older women — supposedly sisters according to the program, but unclear in the script — discussing how one of them is constipated and needs to go to the bathroom. It turns out the constipation was emotional, and all comes out — literally and figuratively — when one confesses an affair to the other. This, in turn, triggers a corresponding confession. I found that the story seemed to play on the stereotypical kvetching of sisterhood gals, combined with the “tittering” of the notion of old-ladies being sexual creatures and a bit of constipation humor. The performances were good, but the story did nothing for me.

The second play, Dinner With The Girls, written and directed by Andrea Rosenwein (FB), tells the story of three older friends: Phyllis (Elena-Beth Kaye (FB)), Denise (Patty Sherman (FB)), and Judy (Marjorie  “MJ” Scott) working on dividing up the bill after dinner at the Red Fire Deli somewhere in San Francisco (the waiter was played by Jeremiah Benjamin (FB)). The story, again, is the typical sterotypical kvetching older Jewish women — this time, single and perfectionist — attempting to divide a check and complain about their married friends. This is the level of pettiness of check dividing one might expect: no, the Matzah Balls were cold. I’m not paying for that — there weren’t enough pickles. I wanted crushed, not lumped ice. The audience was laughing hysterically at these arguments — but that’s because they were clearly coming from that era and milleau. For those of us that find such sisterhood ladies annoying (and I can say this as a past-president of a Mens Club), it wasn’t funny. We later discover that these women all became this way — were doomed to this life of pettiness — because they were afraid to take risk, and they were really in “the bad place” … with one chance to get out … if only they could take a risk. Naturally, they go back to arguing over the check. Again: Good performances, but stereotypical characters of the annoying variety made this very uncomfortable and uninteresting for us.

The third play, Abram and Sarai: My Sister, My Wife, written and directed by Mona Deutsch Miller (FB), was vaguely more interesting. It was a dinner table discussion between Abram (Steven Robert Wollenberg) and Sarai (Linda Rand (FB)) about Abram passing Sarai off as his sister, when she was her wife. This eventually touches on all sorts of biblical events, and we learn that somehow this is Abram and Sarai in Brooklyn sometimes in the 1950s or early 1960s, but still with references to the biblical.  I liked the conceit of this story and the references, but figuring out the actual time frame was a bit difficult and disconcerting. Still, I found this one enjoyable, and again, the performances were good.

The fourth play, Estate Sale, written by Michael Goldstein (FB) and directed by Cloe Kromwell (FB), was the best of the bunch. It told the story of David (Kevin Ragsdale (FB)) and his wife Lisa (Laura Bolcik (FB)) at an Estate Sale being run by a clerk (Hamilton Matthews (FB)). The central notion here is that the husband is a horder; the wife is a minimalist. Through the story, we learn why the husband is hoarding, and see the relationship between the husband and wife and how deep it is. This one wasn’t as stereotypical: it captured the characters well, it told an interesting story, was performed well, and was quite enjoyable.

The last play, Sudden Death, written by Robin Russin (FB) and directed by Thomas Prosser (FB), told the story of a young couple: Terry (Layal Badaro (FB)) and Jake (Jeremiah Benjamin (FB)), who have fallen madly in love after meeting at a bar two days ago and having numerous incidents of wild passonate sex. Jake proposes to Terry, and the fun begins as they start to learn about themselves. This seemed to start out OK, but once it came out that Terry was Catholic and Jake was Jewish, it started to fall into stereotypical tropes that landed a bit flat. It needed more depth than it had. The performances were good, although the actress’s hint of a middle-eastern accent was a bit disconcerting in a situation where you would think — aha, Israeli, but she’s Catholic, so WTF? (it turns out she’s Lebanese, so the Catholic does actually work, but it seemed odd at the time).

On the technical side: the set was … what set? Lighting and sound was by Cal Olivier.

There are two more performances of these shows: tonight and tomorrow night. Tickets are available through Brown Paper Tickets, discount tickets may be available through Goldstar. Two of the five are worth seeing, the others are more hit and miss. We’ll be at Fringe.

Ob. Disclaimer: I am not a trained theatre (or music) critic; I am, however, a regular theatre and music audience member. I’ve been attending live theatre and concerts in Los Angeles since 1972; I’ve been writing up my thoughts on theatre (and the shows I see) since 2004. I do not have theatre training (I’m a computer security specialist), but have learned a lot about theatre over my many years of attending theatre and talking to talented professionals. I pay for all my tickets unless otherwise noted. I am not compensated by anyone for doing these writeups in any way, shape, or form. I currently subscribe at 5 Star Theatricals (FB) [the company formerly known as Cabrillo Music Theatre (FB)], the Hollywood Pantages (FB), Actors Co-op (FB), the Chromolume Theatre (FB), a mini-subscription at the Soraya [the venue formerly known as the Valley Performing Arts Center (VPAC)] (FB), and the Ahmanson Theatre (FB). Through my theatre attendance I have made friends with cast, crew, and producers, but I do strive to not let those relationships color my writing (with one exception: when writing up children’s production, I focus on the positive — one gains nothing except bad karma by raking a child over the coals). I believe in telling you about the shows I see to help you form your opinion; it is up to you to determine the weight you give my writeups.