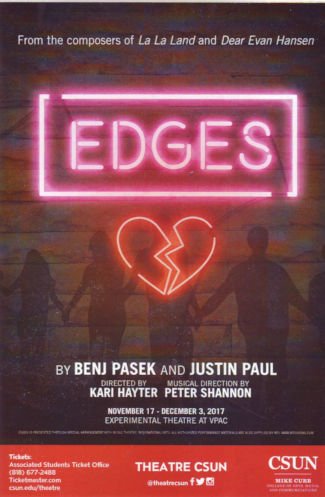 A few months ago, when we went to see the musical  Hello, Again at Chromolume Theatre (FB), they had a series of videos playing before the show started. One of these videos was the song “Be My Friend” from the musical song cycle Edges, which Chromolume had presented during the 2016 Hollywood Fringe Festival. Edges turned out to be a song cycle written by Benj Pasek and Justin Paul (FB) during their undergraduate days in Michigan — their first show, as it was. This duo would later to go on to write shows such as Dogfight, A Christmas Story (which is having a number of productions now, including one at Canyon Theatre Guild with our friend Georgann, and a live TV production) and a little thing called Dear Evan Hansen; and for movies, the songs for La La Land and the upcoming The Greatest Showman.  However, Edges has never been recorded; they only way to get the music is to snarf the audio tracks from the various YouTube performances of the songs.

This, of course, meant that I was jonesing to see a production of the show. When we recently went to see Upright Citizens Brigade at  The Soraya,  the venue formerly known as the Valley Performing Arts Center (VPAC) (FB), we found a postcard that indicated that the CSUN Theatre Department (FB) was doing Edges as part of their Fall season. By the end of the week, my wife (a CSUN alum) had used her alumni card to get us tickets for the show.

Guess where we were last night?

As noted earlier, Edges is a song-cycle. This means there is no plot; no specific characters. According to Pasek and Paul, it was written with the intention to share the many perspectives of 20-somethings as they come into their own and face the challenges of adulthood. It reflects the time that Pasek and Paul were in college — the early 2000s. There isn’t even a fixed order of songs: the license package includes the songs from the original production in 2005 and the songs from a revised production in 2007, and Pasek and Paul encourage producers to draw from those sets to create a version of the show that speaks to them. This goes to what, perhaps, is the one major flaw of the CSUN production: the printed program. There is no song list in the program to show CSUN’s order (which is a mix of both 2005 and 2007), nor a list of which performers sing which songs. If these shows are intended to be a showcase and spotlight for the performers, the audience needs to know who is singing what.

Luckily, for you the reader, my Facebook-foo and internet search abilities are strong, and I was able to find you some pictures of the actors, and I’m familiar with the songs (and hopefully, I remember who sang them). But I do encourage CSUN Theatre to beef up their programs. It is only an additional black and white sheet — perhaps 10¢ a program — and it could make a big difference in the careers of your actors.

Edges was directed by Kari Hayter (FB), whose work we have seen both a CSUN (Urinetown and The Drowsy Chaperone) and at The Chance Theatre (FB). Watching the performers, I was surprised that — for a song cycle — there was so much performance. Hayter brought out in her actors the characters in the songs. If you get a chance to go see the show (and you should, but note that some performances are already sold out), watch the faces and the bodies in addition to listening to the songs. You’ll be blown away by the expressiveness and emotion these young performers bring to the stage.

The cast itself bring a mix of experience. For some, this is one of their first shows. Others have been in a number of productions at CSUN as well as out in the real world with companies such as Canyon Theatre Guide, Simi Arts, MTW, and of course, the Chance. This led to another suggestion I would make to the cast: warm up your singing voice before starting. I was unsure about a few of the voices at the beginning of the show, but by the end I loved them all. This means that the issue wasn’t the quality of the voice, just a missing warm up. As with any muscle, stretching before use gives a better result.

The more seasoned performers stood out from their first notes.  I was blown away by Jisel Ayon (FB), Alissa Finn (FB), and Leonel Ayala (FB) from the start. They nailed their songs and were a delight to watch and listen too. Ayon was particularly strong in all her songs, including the penultimate “Ready to be Loved”. I recall Finn was great in “Caitlyn and Haley” among other numbers, and there was a solo number by Ayala (of which I can’t recall the name — us oldsters need that list) that was just spectacular.

This is not to say the others were significantly less. It was just those three that made the impression first, the next tier of impressions that hit me were Darian Ramirez (FB), Shyheim Parker/Shyhiem Parker (FB), and Jared Price (FB). Ramirez was just spectacular — I thought I heard her in the background on the opening number, and then she had some solo pieces and …. wow. This included her interaction with the audience in “I’ve Gotta Run”. Parker also has a strong voice I thought I heard in the opening, which then came out spectacularly in his solo number (which I can’t recall the name of). Lastly, Price had a solo number (drats, no song list, and this 57-year old mind is blanking) that was really great.

I was initially unsure about Ethan Barker (FB) and Shiku Thuo (FB), but I think the problem was a warm-up one. Both were remarkably expressive in terms of performance, and were strong in their later solo numbers. In the latter half of the show, In particular, Thuo had a number where her face was just a delight to watch.

But this 8-person cast came together in the group numbers. Just watch their expressions — and the audience reactions — in numbers like “Be My Friend (The Facebook Song)”. Just a joy to watch. Watch them in the background in numbers like “Ready to be Loved” or the “Opening”, and you can see that this is more than solo performances glommed together: this is a cast that jelled and was having fun together. As I always like to note: a cast that is having fun with their show telegraphs that to the audience, and the joy is amplified.

Music was provided by two on-stage musicians: Peter Shannon (FB) on Piano and Athanasios Gousios (FB) on Drums. Watch Shannon in particular as he gets ready to rock out on the final number. They were having fun as well.

Turning to the production side: Efren Delgadillo (FB) scenic design was relatively simple: some platforms on both sides of the center stage, augmented with a few chairs and, occasionally, properties designed by Rob Murray. This was augmented by a lighting design by Mark Svastics (FB) that mostly worked well; there were a few times performers were ahead of the lights and in the dark for a second or two. Omnipresent Cricket Myers (FB) did the sound. Alas, there were some opening night problems here ranging from microphone static to occasional muffled sound. Hopefully post-opening adjustments should fix that. Costumes were designed by Elizabeth Cox (FB) and Brynn Mangelsdorf. These mostly worked well — and I particularly liked the outfits that Ayon and Ramirez were wearing. Rounding out the credits, Peter Shannon (FB) was the music director, and Quentin Melikidse (FB) was the stage manager.

Edges by the CSUN Theatre Department (FB) continues at the Experimental Theatre of VPAC through December 3, although some performances are already sold out. Tickets are available through the Associated Students Ticket Office at 818/677-2488 or through Ticketmaster. More information is available on the Event Page. This event is not available on Goldstar.

Today sees us at the Tumbleweed Festival (FB); Tomorrow, it’s Spamilton at the Kirk Douglas Theatre (FB) on Sunday. Thanksgiving Weekend will bring Something Rotten at the Ahmanson Theatre (FB). November concludes with the Anat Cohen Tentet at the Saroya (the venue formerly known as the Valley Performing Arts Center (VPAC)) (FB) and  Levi (a new Sherman Brothers musical) at LA Community College Caminito Theatre (FB).

December starts with ACSAC 2017 in Orlando FL. As soon as we return, we’ve got Pacific Overtures at Chromolume Theatre (FB) and the Colburn Orchestra at the Saroya (the venue formerly known as the Valley Performing Arts Center (VPAC)) (FB). The weekend encompassing Chanukah sees us back at the Saroya  (FB) for the Klezmatics (FB). We also hope to squeeze in a performance of A Christmas Story at the Canyon Theatre Guild (FB). Of course there will also be the obligatory Christmas Day movie — who knows — perhaps it’ll be the upcoming The Greatest Showman.

Right now, early 2018 is pretty open, with only a few weekends taken by shows at the Pantages and Actors Co-Op. I did just pick up tickets for Candide at LA Opera (FB). But that will likely fill up as Chromolume announces their dates, and announcements are received on interesting shows. Currently, we’re booking all the way out in mid to late 2018! We may also be adding a CTG subscription, given their recent announcements regarding the next season.