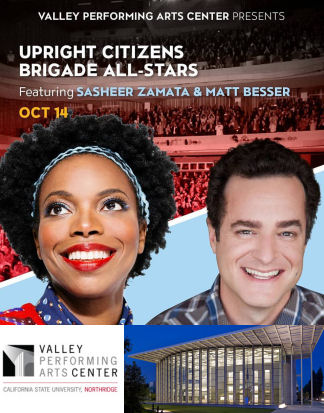 The live entertainment break that started when we went off on vacation in August is over, and the theatre calendar thought the rest of 2017 is quite busy. The drought-breaker was the first show in our 2017-2018 season at The Soraya,  the venue formerly known as the Valley Performing Arts Center (VPAC) (FB): an evening of improv comedy from the Upright Citizens Brigade (FB), featuring Sasheer Zamata (FB) and Matt Besser (FB), with  Jessica McKenna (FB), Hillary Anne Matthews (FB), and one other player who was only named from the stage.

Going in, I noticed that this was one of the most poorly attended shows we’ve been to at VPAC. The upppermost balcony was closed, and I’d estimate the crowd was perhaps one third to one half of its normal size (but significantly younger). I’m not sure why, but this wasn’t the expected draw.

As for the show itself, it wasn’t what we expected — although to be true, we didn’t know what to expect. Perhaps an evening of topic sketch comedy, or a series of standups? What we got was five people, five chairs, soliciting stories from the audience. After hearing each embarrassing story, the improv team would riff on various aspects of the story.

There were points of the show that were very funny, but there were often a lot of misses and missed opportunities. That’s how improv goes, I guess. It’s something that would work well on the small stage of UCB over on Franklin in Hollywood, but I’m not sure it works in the large hall like the Saroya (VPAC). [I’ll never get used to that name.]

Ob. Disclaimer: I am not a trained theatre (or music) critic; I am, however, a regular theatre and music audience member. I’ve been attending live theatre and concerts in Los Angeles since 1972; I’ve been writing up my thoughts on theatre (and the shows I see) since 2004. I do not have theatre training (I’m a computer security specialist), but have learned a lot about theatre over my many years of attending theatre and talking to talented professionals. I pay for all my tickets unless otherwise noted. I am not compensated by anyone for doing these writeups in any way, shape, or form. I currently subscribe at Cabrillo Music Theatre (FB) (well, make that 5 Stars Theatricals(FB)), the Hollywood Pantages (FB), Actors Co-op (FB), the Chromolume Theatre(FB) in the West Adams district, and a mini-subscription at the Valley Performing Arts Center (VPAC) (FB). Through my theatre attendance I have made friends with cast, crew, and producers, but I do strive to not let those relationships color my writing (with one exception: when writing up children’s production, I focus on the positive — one gains nothing except bad karma by raking a child over the coals). I believe in telling you about the shows I see to help you form your opinion; it is up to you to determine the weight you give my writeups.

The drought has ended, and the last three months of 2017 are busy busy busy. This afternoon brings a supposedly refreshed version of  Joseph and the Amazing Technicolor Dreamcoat at 5 Star Theatricals (the company formerly known as Cabrillo Music Theatre) (FB). Thursday sees us back at the Saroya (the venue formerly known as the Valley Performing Arts Center (VPAC)) (FB) for a tribute to Ray Charles — To Ray With Love.  The third weekend in October brings Bright Star at the Ahmanson Theatre (FB) on Saturday; on Sunday, I’m going to see a thriller penned by the fellow through whom we get our Saroya (VPAC) subscriptions, Schaeffer Nelson (FB) — Mice at the Ensemble Studio Theatre LA (FB) in Atwater Village. The weekend before Thansgiving brings This Land at Company of Angels (FB) in Boyle Heights

Looking into November, we start with the Nottingham Festival (FB) in Simi Valley, followed by The Man Who Came to Dinner at Actors Co-op (FB). The following weekend brings a Day Out with Thomas at Orange Empire Railway Museum (FB). The third weekend will hopefully bring Edges at the CSUN Theatre Department (FB) on Friday, the Tumbleweed Festival (FB) on Saturday, and Spamilton at the Kirk Douglas Theatre (FB) on Sunday. Thankgsiving Weekend will bring Something Rotten at the Ahmanson Theatre (FB) and hopefully Levi (a new Sherman Brothers musical – join the Indiegogo here) at LA Community College Camino Theatre (FB). November concludes with the Anat Cohen Tentet at the Saroya (the venue formerly known as the Valley Performing Arts Center (VPAC)) (FB).

December starts with ACSAC 2017 in Orlando FL. As soon as we return, we’ve got Pacific Overtures at Chromolume Theatre (FB) and the Colburn Orchestra at the Saroya (the venue formerly known as the Valley Performing Arts Center (VPAC)) (FB). The weekend encompassing Chanukah sees us back at the Saroya (VPAC) for the Klezmatics. We also hope to squeeze in a performance of A Christmas Story at the Canyon Theatre Guild (FB). Of course there will also be the obligatory Christmas Day movie.