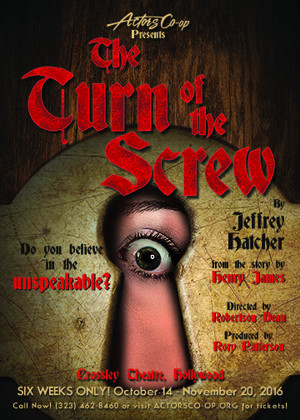 This has been a summer of drawing inferences from very little information. Mail is deleted from Hillary Clinton’s email server, and we create inferences in our head from almost no actual information. Similarly, Donald Trump does not release his tax returns, and we start inferring what is in those returns from very little information. This lack of information engages our imagination, and the explanation we create can be very frightful. Whether it is the truth, however, we may never know. But it scares us nevertheless.

In the theatre, minimal information can manifest itself in many ways. One can have minimal sets and costumes, such as in the recent Our Town at Actor’s Co-Op.  In that production, you had a large cast of actors with minimal set and minimal costumes. It was done that way because that is the direction from the playwright — he wanted the audience to focus on the story and relationships, and not be distracted by other eye candy.  It is what, in essence, made Our Town into Every Town.

Another way that minimal information can manifest itself is through minimal casts. Consider the recent Gutenberg: The Musical we saw in San Diego, or the production of Murder for Two that was at the Geffen in 2015. Both had casts of just two, and required the audience to use their imaginations to establish the multitude of characters portrayed simply through voice and mannerisms. Murder for Two is particularly interesting in this regard: one actor portrayed one main character, and the other actor portrayed every other character.

Letting the audience (or the reader) infer is a long-standing literary and theatrical trick. One classic horror story where this technique is used is Henry James‘ “The Turn of the Screw“, published in 1898. The novella uses imagery and framing and storytelling techniques to only hint at the horror, and to leave it to the reader to come up with their own interpretation of the conclusion. The novella has been adapted into many different forms; last night, we saw Jeffery Hatcher‘s 1997 interpretation of the story at Actors Co-op (FB). Like the novella, this adaptation specifically requires minimal sets (just some stairs), minimal actors (just two), minimal sound effects (just from the actors), and minimal costumes (no costume changes)… and the story conveys minimal information about what happened, what is real or is not, and the whys and wherefores. It is left to the audience to infer.

By now, you’re probably wondering what the story is. You can read a synopsis of the original novella here. Here’s the setup; I won’t disclose the ending:  An unnamed narrator tells the story of a former governess whom he claims to have known.  The story begins when the young governess is hired by a man who has become responsible for his young nephew and niece after the deaths of their parents. He lives mainly in London and is uninterested in raising the children. The older boy, Miles, is attending a boarding school, while his younger sister, Flora, is living at their parent’s estate, Bly, in Essex. Flora is currently being cared for by Mrs. Grose, the housekeeper. Miles and Flora’s uncle, the governess’ new employer, gives her full charge of the children and explicitly states that she is not to bother him with communications of any sort. The governess travels to Bly and begins her duties. Miles soon returns from school for the summer just after a letter arrives from the headmaster stating that he has been expelled for an unspeakable reason. Miles never speaks of the matter, and the governess is hesitant to raise the issue. The girl, Flora, does not speak and has not spoken since the death of her parents. Soon thereafter, around the grounds of the estate, the governess begins to see the figures of a man and woman whom she does not recognize. These figures come and go at will without ever being seen or challenged by other members of the household, and the governess does not know what to make of them. She learns from Mrs. Grose that her predecessor, Miss Jessel, and another employee, Peter Quint, had a sexual relationship. Before their deaths, Jessel and Quint spent much of their time with Flora and Miles… and from there, well, you’ll either need to read the story or go see the play. I recommend the latter.

This lack of information leads the audience to fill in the pieces. It is up to them to determine, for example, if Quint and Jessel are real, are ghosts, or are just figments of an imagination. They get to infer exactly what it is that Miles did, and what drove Flora not to speak. There are hints, but no pre-determined explanation. This may be difficult for some audience members who have been raised on being spoon-fed a plot, but it is a great thought exercise. It also makes for wonderful car discussion as you drive home from the play with the people you shared the experience with. 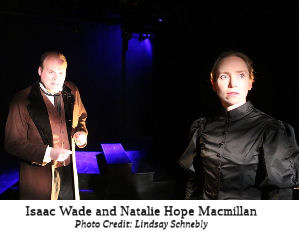 In such a presentation, the real power of the storytelling is in the director and the actors. It is their responsibility to become the various characters through voice and mannerisms, to make the audience imagine the locales and the space within. This is difficult in a traditional proscenium arch theatre (i.e., your typical stage); it is even harder in a “theatre in the round” such as the Crossley space at Actors Co-Op. Luckily, the director, Robertson Dean, and the actors, Natalie Hope MacMillan (FB) and Isaac Wade (FB) were up to the task.  MacMillan played the Governess, and Wade played every other character — the narrator, the employer, Mrs. Grose, Miles, and Quint. MacMillan’s Governess was an interesting exploration of discovery: she started out artificially confident, and learned how to channel that confidence into an attitude of authority, until (as is common) past trauma came out to change her. Wade was her equal — if not more — easily moving from the detached employer to the concerned housekeeper to the childish boy, portraying them all with different stances and voices and such. The director, Dean, as we learned during the talkback, gave them time and leeway to explore and develop their characters, and to figure out how to move and express the relationships in a space with no props as references.

Speaking of these minimal aspects: Ellen Lenbergs (FB) developed what little scenic design there was, and David B. Marling similarly developed the minimal sound design. The lighting design by Jean-Yves Tessier (FB) was similarly minimal: some uplights on the floor, some whites and blues from above. The costumes by Jenny Foldenauer (FB) were similarly stark: an austere head to toe black dress for MacMillan, and a dark-brown suit and waist-coat for Wade. The real scenic designer — beyond the director — was the dialect coach, E. K. Dagenfield (FB). Rounding out the production credits are Nicholas Acciani (FB) (Stage Manager); Heather Chesley (FB) (Artistic Chair); David Elzer (FB) (Marketing / Publicist); and Selah Victor (FB) [Production Manager]. The Turn of the Screw was produced by Rory Patterson (FB).

The Turn of the Screw continues at Actors Co-op (FB) through November 20, 2016. Tickets are available through the Actor’s Co-op Website. Discount tickets may be available through Goldstar or LA Stage Tix.  This is an interesting mystery/horror play, and worth seeing.

Interrupting this recap for a word from a sponsor: Linden Waddell’s Hello Again, The Songs of Allen Sherman at Temple Ahavat Shalom is open to the community, and is a joint fundraiser for MoTAS and Sisterhood. Please tell your friends about it. I’m Past President of MoTAS, and I really want this to be a success. Click on the flyer to the right for more information. It should be a really funny night.

November starts with another Valley Performing Arts Center (VPAC) (FB): Culture Clash’s Vote or Die Laughing. The following weekend brings Hedwig and the Angry Inch at  the Hollywood Pantages (FB) and the Nottingham Festival (FB). We then lose a weekend as we travel to Palo Alto for a Bar Mitzvah. The third weekend of November brings Funny Girl, a Conundrum Theatre Company (FB) guest production at  The Colony Theatre (FB) and a Day Out With Thomas at Orange Empire Railway Museum (FB) [excuse me, “Southern California Railway Museum”]. November concludes with a HOLD date for Little Women at the Chance Theatre (FB) in Anaheim. The last month of the year will include Into the Woods at Nobel Middle School, the CSUN Jazz Band at the Annual Computer Security Applications Conference (ACSAC), Amalie at the Ahmanson Theatre (FB), The King and I at the Hollywood Pantages (FB); an unspecified movie on Christmas day; and a return to our New Years Eve Gaming Party.

Turning to 2017, January currently is quiet, with just a single hold date for Zanna Don’t at the Chromolume Theatre (FB). February 2017 gets back to being busy: with a hold for Zoot Suit at the Mark Taper Forum (FB) the first weekend. The second weekend brings 33 Variations at Actors Co-op (FB). The third weekend has a hold for the WGI Winter Regionals. The last weekend in February brings Finding Neverland at the Hollywood Pantages (FB). March quiets down a bit — at least as currently scheduled — with Fun Home at the Ahmanson Theatre (FB) at the beginning of the month, and An American in Paris at the Hollywood Pantages (FB) at the end of the month.

As always, I’m keeping my eyes open for interesting productions mentioned on sites such as Bitter-Lemons, Musicals in LA, @ This Stage, Footlights, as well as productions I see on Goldstar, LA Stage Tix, Plays411 or that are sent to me by publicists or the venues themselves. Note: Although we can’t make it, I also recommend the 10th Anniversary Production of The Brain from Planet X at LACC. Lastly, want to know how to attend lots of live stuff affordably? Take a look at my post on How to attend Live Theatre on a Budget.