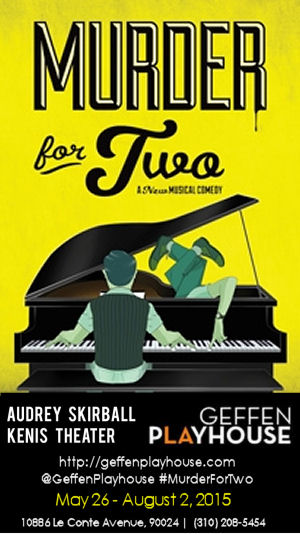 Last August, when we saw Two Gentlemen of Verona at the Old Globe, I picked up a copy of the cast album of the new musical Murder for Two. I had heard good things about the musical, although it had never been in Los Angeles (it had, however, been in San Diego). I took a listen, and it sounded like a hoot. Thus, when I learned that it was coming to the Geffen Playhouse (FB), I put a hold date on the calendar and started to watch for tickets. When they came out (this was before the show extended and everything went up on Goldstar), I got two tickets for the day with the best seats: Friday, July 3rd. Thus began the first double-header theatre weekend for July.

Last night saw us wandering Westwood Village, which was a pitiful sight (made the worse by an unexpected migraine (as if they are ever “expected”)). Westwood is a shadow of what it was when I went to UCLA: greed, rising rents, and the wrong mix of stores have left empty storefronts, empty streets, and a lack of character. But there is one thing that stays the same in Westwood — the Westwood Playhouse. Oh, right, it’s now the Geffen Playhouse (FB), and they added a second theatre, the Audrey Skirball Kenis Theatre. Well, at least the building and the quality are the same. We don’t go to the Geffen often — they don’t always discount shows until the last minute, and their standard prices are typically out of my comfort zone. A suitably unique show — such as Murder for Two — can overcome that threshhold.

Here’s why I’m mentioning all this: Last night I’m sitting in seats I paid much more than usual for, at a show I really wanted to see, dealing with a stubborn migraine headache that didn’t want to go away, … and … this show was funny enough to make me forget about my headache for 80-85 minutes (it was a 95 minute show, no intermission). That’s a compliment. Although it started a little show, it rapidly ramped up and kept going so fast that I was able to ignore the pain in my head.

The basic story for Murder for Two is nothing new or unusual — especially if you watch CBS crime procedurals. A murder occurs in the first few minutes. A green officer is sent to secure the scene for the detectives, and while waiting, he decides to investigate. After questioning everyone, he eventually figures out the murderer. The plot of how many murder mysteries? What’s special about Murder for Two is the execution. That didn’t come out right. Perhaps I should explain.

The cast of Murder for Two consists of… two. Brett Ryback (FB) plays Marcus, the police officer investigating the murder. Jeff Blumenkrantz (FB) plays every other role: including the dozens of suspects and other officers. He is constantly switching personas with nothing more than a simple prop, mannerism, or voice. While doing all of this, the two actors are also accompanying themselves on the piano. This results in a roller coaster ride where Blumenkratz keeps changing the direction of the coaster until you are never quite sure who he is, and the audience (and Rybeck) has to keep up. Now, add to this the fact that the two actors seem to be having fun with the roles, and seemingly delight in trying to crack each other up as well.

The story for Murder For Two (book by Joe Kinosian and Kellen Blair (FB); music by Joe Kinosian (FB); lyrics by Kellen Blair (FB)), as noted earlier, is an homage to so many locked-room murder mysteries. You have a bunch of suspects in the room. You know one of them did it. You start questioning them one by one. The good thing in Murder for Two is that they didn’t (at least to my discernment — but then again, my head hurt) didn’t telegraph the murderer. You do, of course, know the case will be solved by the good guy, but that’s a given in any story like this. The accompanying music was energetic and funny, and a number of songs were easily earworm material (particularly “A Perfectly Lovely Surprise” and “Protocol Says”); however, none of the songs reached standard level (meaning they can come out of the show and be standards on their own). The primary reason for this was that the music did exactly what it was supposed to do: be integral to the story and be closely tied to the characters.

Let’s look at the pieces we have so far: a very funny book, very entertaining music, and strong comic performances. However, we still can’t render a verdict yet. What are we missing? After all, my wife was much more lukewarm about the show than I — she thought the first fifteen minutes or so dragged; the humor wasn’t quite her thing.

Let’s look at the musical performance, which brings us back to Brett Ryback (FB) and Jeff Blumenkrantz (FB). Both are excellent piano players, and have a style reminiscent of Chico Marx in their ability to exploit the piano for comic effects. This is seen both in the opening of the show (where they fight over the piano) and in the closing bows, where they do a wonderfully comic piano encore.

But the last piece of the puzzle is a technical piece. This show depends on the very clever scenic design of Beowulf Boritt (FB), the sound design of Jill BC Du Boff (FB), the lighting design of Jason Lyons (FB), and the costume design of Andrea Lauer (FB). You get an idea of the cleverness of the scenic design in the opening scenes where the stage is set (so to speak) with the lighting projection from the junk of the stage, but the real cleverness of the scenic design reveals itself in the end. The cleverness of the sound design reveals itself throughout in the excellent and well timed sound effects (that they time so perfectly at all is a testament to the sound design and the board operators). Lighting is similar — it is used in clever ways to illuminate the mood and how it changes in a split second. The last clever design aspects were the costumes: the ability to use small costume aspects or props to change the nature of characters was astounding.

Bringing this all together was the talents of the director, Scott Schwartz (FB); the music director, David Caldwell; the choreographer, Wendy Seyb (FB); and the production stage manager, Cate Cundiff (FB). They got the thankless job of corralling all this craziness, of getting the split second timing required for this farce down, of ensuring that everything was precisely where and when it needed to be. Remaining show credits are: Casting – Calleri Casting (FB); Production Supervisor – Production Core (FB); Understudies – Matthew Wrather (FB) [for Marcus]; John Wascavage (FB) [for the Suspects]; Zach Spound (FB) [for the Suspects].

We’ve followed protocol: we’ve looked at the story, the music, the performances, the technical, and the direction. We’ve considered all the players. The verdict: if you like well-timed and well-performed farcical comedy with silly performances, you’ll like Murder for Two (FB) at the Geffen Playhouse (FB). Luckily, the show — which had been scheduled to close on July 12 — has been extended to August 2. The bad news is that Jeff Blumenkrantz (FB) will be on leave from the show from 7/10-23.   Tickets are available through the Geffen Box Office; discount tickets may be available on Goldstar.

Upcoming Shows: July is a month of double-headers. Today, our double-header continues with “Matilda” at the Ahmanson Theatre (FB), where we get to brave the big 4th of July Block Party at Grand Park (FB). Next weekend is another double: On Friday night, July 10th, we’re seeing Colin Mitchell‘s show Madness, Murder Mayhem: Three Classic Grand Guignol Plays Reimagined at Zombie Joes Underground Theatre (FB); Saturday July 11th brings “Jesus Christ Superstar” at REP East (FB). The following weekend is another double header: “The History Boys” at the Stella Adler Theatre (FB) on Saturday (Goldstar), and “Green Grow The Lilacs” at Theatricum Botanicum (FB) on Sunday.  The last weekend of July brings our last double: “Lombardi” at the Lonny Chapman Group Rep (FB) on July 25th, with the annual Operaworks show the next day. August start calming down, with “As You Like It” at Theatricum Botanicum (FB) the first weekend of August, our summer Mus-ique show the second weekend of August, and “The Fabulous Lipitones” at  The Colony Theatre (FB) the third weekend of August. After that we’ll need a vacation … but then again we might squeeze in Evita at the Maui Cultural Center (FB) the last weekend of August. September right now is mostly open, with the only ticketed show being “The Diviners” at REP East (FB) and a hold-the-date for “First Date” at The La Mirada Theatre for the Performing Arts (FB). October will bring another Fringe Festival: the NoHo Fringe Festival (FB). October also has the following as ticketed or hold-the-dates: Kelrik Production (FB)’s Urinetown at the Monroe Forum Theatre (Hold for Sat 10/3);  “Mrs. A. Lincoln” at The Colony Theatre (FB) (Ticketed for Sat 10/10); and  “Damn Yankees” at Cabrillo Music Theatre (FB) (Ticketed for Sat 10/17). As always, I’m keeping my eyes open for interesting productions mentioned on sites such as Bitter-Lemons, and Musicals in LA, as well as productions I see on Goldstar, LA Stage Tix, Plays411.