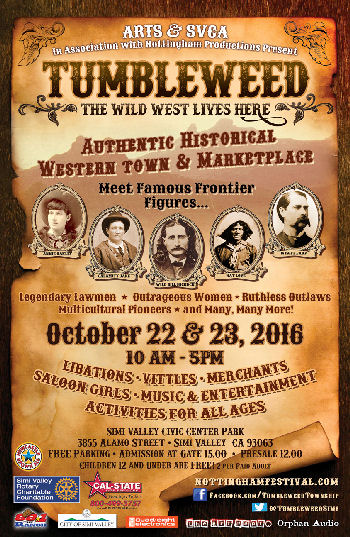 There’s a new Faire in Simi Valley, and we went to it today. Although, to be truthful, it isn’t really a Faire. However, it is Faire-like, and it is true to the spirit of Faire, and for something new, it is quite remarkable. It also raises some interesting questions.

It is Tumbleweed Township (FB), and it is a Living History event set in approximately the 1880s to 1890s in the West (actually, perhaps what Simi Valley was at that time). This event is put on by the same folks that do Nottingham Festival (FB), a new Renaissance Faire in Simi Valley in mid-November. Like Nottingham, the folks behind the event (Actors Rep of Simi Valley (FB) and the Simi Valley Cultural Association (FB)) are dedicated to doing Faire like it was done originally — that is, going back to the first days of the first RenFaire in Ventura County. That means a dedication to living history, and less of a concern about profits and maximizing revenue. As they put it on the Nottingham page:

Since the days after the Faire put on by the Living History Center left Agoura, there has been a desire to bring a more accessible regional Renaissance style event back to the Ventura County area. A group of dedicated volunteers from the community along with the Actor’s Repertory Theater of Simi and the non-profit Simi Valley Cultural Association set out to make that dream a reality. Nottingham Festival will recreate the magic and revelry of an Elizabethan faire and marketplace with street performers and stage acts that will provide entertainment for all ages. Craft workers and reenactors from various guilds will entreat you to experience a taste of the handicrafts and lifestyle of the 16th Century. Our hope is that you will be well entertained and maybe even learn a thing or two about the time period and its people. Proceeds from this non-profit festival will be granted to smaller non-profit agencies in the surrounding communities, as well as some set aside for the further development of the arts programs for youth.

Tumbleweed is an attempt to create a new living history event — this one set in a township in the 1880s and 1890s. There are still many Faire-ish elements: food booths, craft booths, stages, and music. However, the crafts are a little bit different, the shows a bit more cowboy-ish, and the atmosphere — as befits the Western ethic — a lot less bawdy. There is also — thankfully — a lot less fantasy aspects. No pirates. No fairys. No fantasy elements. The closest fantasy elements are Steampunk. It’s also pretty easy to garb yourself — jeans, flannel shirts, cowboy belts and hats work just fine. Just no guns. Only the actors get replica guns. Per the agreement with Simi PD: “There shall be no firearms or replica firearms allowed to be brought onto the premises by the public.”

Now that you know what the notion behind what Tumbleweed is, how was it executed? Pretty good. It was very small this year.  There were perhaps 8 food vendors: turkey legs, BBQ chicken and steak and veggies, kettle corn, sandwiches, shave ice, ice cream, coffee, and of course, mead, whisky, and cider. There were about 15-20 vendors: a few clothing, jewelry, soaps, crafts, and such. There were three stages with a small number of shows. There were a few guild-like exhibits, including a quilting bee. There were games of chance. There was also the “Grand Exhibition Hall of Famous Personages” — which is like the “Explorers Hall” at Nottingham with famous people brought back to life, from Jenny Lind to Annie Oakley to Kit Carson, to Sacagawea to… you get the idea.

So, the town was small and attendence was moderate — but the idea is great. A big problem with Faire is that there are so many of them, and they are all similar, and all explore the same history. This was a new historical area, and actually relevant to when it took place. Simi Valley and California epitomize the west, and towns like this did exist. With better publicity, they could be starting a new trend (further, I could image this being something that Orange Empire Rwy Museum could do quite well).

But there are dangers as well. What RenFaire has become is fantasy; it rarely presents true living history anymore. This is good, because it is accepting of all races and creeds (whereas the original Elizabethan time would be less forgiving). If there is any parodying of culture, it is parodying of Anglo-Saxon culture. When we turn to the old West, however, we run the risk of stereotypical “Cowboys and Indians”, of the Lone Ranger and Tonto, and this can be a danger. While there was freedom in the West, it also created a stereotypical view of the Native American — and care must be taken. However, done right, it can present a true picture of the relationship between Western settlers and their Native American neighbors — different from what the movies might present.

It also created the question in my mind of what other periods of living history might be ripe for equivalent events — and how might this be done without cultural approbation. Other eras have been done — just look at the successful Great Dickens Christman Fair and Victorian Holiday Party (FB) in the Bay Area. Doing a Feudal Japan Faire would probably not be a good idea. But what about Europe in the Dark Ages, well before Elizabeth. What about the mid-East in Biblical times? What about a Colonial faire? All could be quite interesting — and educational.

Coming back to Tumbleweed Township (FB): Was it a success? I can’t speak to financially for the participants, but I think it is a great idea, and we’ll certainly be back. I hope it grows, for it is an era that is worth exploring.

Tumbleweed Township (FB) runs for one more day, running 10 AM to 5 PM. Tickets are available online or at the gate. The event takes place at 3855 Alamo in Simi Valley across from the DMV!