As I noted in my last post, when we were at the Ahmanson Theatre (FB) Saturday night a very interesting piece of news was reveled. We were walking by the subscription table when the subscription-pushing-volunteer asked if we were interested in subscribing. I indicated that we were already full-up on subscriptions, and we tended to use Hottix to get our Ahmanson tickets. For those unfamiliar with it, Hottix was a program that made the limited view seats on the sides of the  theatre available for $25 plus a 10% service charge. This was a remarkable deal. It was then that he dropped the bombshell: Center Theatre Group (FB) was discontinuing the Hottix program as of the 2016-2017 season.

Heaven forfend! I quickly took out my cell phone and looked for confirmation, but couldn’t find any corroborating material online.

When I got home and was writing up the show Sunday morning, I did more research. I also dropped a note to Customer Service at the Ahmanson, where my fears were confirmed: “I am sorry that at this time there has not been an announcement as to the ending of HotTix.   There will be soon.” I also asked about Day-Of Rush HotTix, and those are disappearing as well: “From what we have been told, there will be no “Day Of” rush.” I also asked about the Ahmanson continuing to put tickets up on Goldstar (which we never used because HotTix were a better deal), and learned: “There will still be some Goldstar offers – but they will be for pre-sale to get patrons to purchase earlier rather than later and they will not be as discounted as the Subscriber tickets.”

That’s the bad news. Basically, the Ahmanson is adopting the same approach that we currently see at the Pantages: better scaling of the pricing of seats in the orchestra (they won’t be all the same price), and demand pricing for popular shows (i.e., if there is lots of demand, ticket prices go up). Thank you, New York. 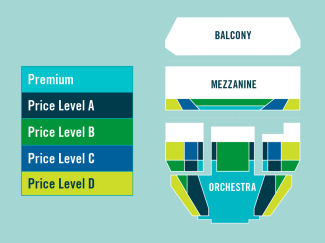 To the right is the new Ahmanson pricing model (snarfed from their website). As you can see, pricing has been divided into roughly 6 levels: the premium orchestra seats, four price levels spanning the orchestra and mezzanine (and presumably founder’s circle) areas, and the remainder of the mezzanine and balconies. The old HotTix areas are the “D” seats.

For general admission sales, a limited number of $25 tickets will be available. As my customer service rep wrote: “I will also mention that we will still have 25 dollar seats that go on sale with the general public.  We are trying to have patrons buy early and be rewarded for that.  With hit shows waiting until the last minute will result in higher prices and surely all the 25 dollar tickets will be gone.” General sales will also be available in the Balcony and Mezzanine.

Current subscribers in the balcony and mezzanine have been moved to equivalent price points (I’ll get to that in a minute) in the A-D levels. This will likely mean that the D and possibly C seats may be full; and for those getting D, they may not be very happy moving from good view balcony to limited view orchestra. There are also no subscription options for the Premium seats — presumably those are full up from past Orchestra subscribers, and new subscribers will get the option to “upgrade” after they see who doesn’t renew.

That brings us to subscription options and pricing. For this discussion, I’m going to use Saturday Night seating as my benchmark.  Here’s the pricing table that I was provided from customer service; it agrees (on the full ticket prices) from what I got from the Ahmanson subscription pages:

Note the “$60 handling fee”. That is a $10/per ticket fee for subscribers, and it applies for both full subscriptions and the “build your own” subscriptions (which are less than 6 shows). This means that, in some cases, the per-ticket price for subscribers may be higher than the full price ticket. Note that this belies their claim of “enjoy the absolute very best seats at every Center Theatre Group performance at the best price—up to 30% off single tickets.” Right now, it also does not appear to include parking (which might make it a better bargain, but then again, if you take Metro to the theatre, it doesn’t). All this gives you is the ability to change your dates easier, and the ability to buy more tickets at your price if demand pricing raises the price of tickets. I’ll note that the “build your own season” (“Pick four or more shows at all three of our theatres and get access to our best seats, prices, and benefits.”) appears to have the same pricing as the full season.

ETA 2016-07-16: For comparison purposes: If you buy full price tickets at the box office online, the handling charge is 10%. If you buy at the physical box office, according to customer service, there is no handling charge. This means, when you add in handling charges, unless you are going for premium seats, the cheapest seats (until demand pricing kicks in) will always be at the physical box office, with full price online coming less than the subscription price. That’s not how to design a subscription program, boys and girls. You are assuming your audience is too stupid to do the math.

There is a third option: the Passport. For that, you pay $125 “and save up to 50% off at all three of our theatres.” Basically, the Passport gives you the ability to “purchase up to two tickets at the discounted Passport price to each production at the Ahmanson Theatre, Mark Taper Forum, and Kirk Douglas Theatre produced or presented by Center Theatre Group.” This would be in a special purchase period before the show opens, and the price of the passport is not based on where you buy the tickets. That’s significant, for buying 2 discounted tickets for six shows in the lower-priced tiers will not offset the cost of the passport.

At this point, I’m not sure what I will do. I’ve been going to the Music Center for theatre since 1972. My parents were LA Civic Light Opera subscribers. At one point I had an Ahmanson subscription, but dropped it ages ago and have used HotTix for better seats for lower prices.  I broke down and subscribed at the Pantages this year to ensure Hamilton tickets, but they (a) don’t add the outrageous $10 per ticket fee, and (b) allow you to break your subscription into 10 payments (CTG only supports 2).  This year we’re only interested in three shows: Amalie, Fun Home, and Curious Incident. Do I do a Build-Your-Own Subscription? a Passport? Goldstar? Take my chances on open sales? Right now, I’m thinking open sales or Goldstar.

A final conspiracy-theory thought: Could this be connected to the Pro99 battle? After all, if the 99 seat theatres are killed off, there will be less theatre in town, and more demand for the Ahmanson, and they can charge more. That would never happen now, would it?

I’m open to your thoughts.