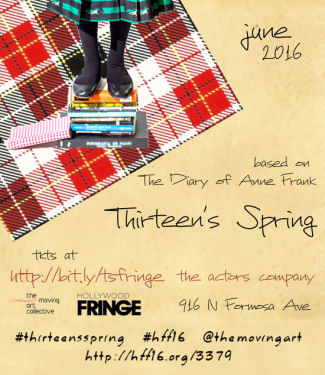 In Jewish literature, the term Midrash refers to a method of interpreting biblical stories that goes beyond simple distillation of religious, legal, or moral teachings; specifically, Midrash fills in gaps left in the biblical narrative regarding events and personalities that are only hinted at. Much fiction, and a lot of good theatre, is essentially midrash. Look at the hit musical Wicked. This is a midrash about what happened to the witches in the Oz story before the events in the book. Look at the play Rosencrantz and Guildenstern Are Dead, which explores what happens when the two courtier characters are off-stage.

Last night, I saw a theatrical midrash based on The Diary of Anne Frank. For those unfamiliar with the book, Anne Frank was a Dutch Jewish girl who went into hiding in an attic in Amsterdam when the Nazi’s invaded. Anne didn’t survive the war; after the war her father found the diary and published it, whereupon it became a classic of Holocaust literature, and the basis for plays and movies. There is more summary of the book on the Wiki page.

As I was saying, however, last night we saw a theatrical midrash based on The Diary of Anne Frank: Thirteen’s Spring from The Moving Art Collective (FB), an encore presentation from June’s Hollywood Fringe Festival (FB). Thirteen’s Spring explores the period just before the Frank family went into hiding. Wikipedia described this period as follows:

During the Nazi occupation of the Netherlands, Anne Frank received a blank diary as one of her presents on June 12, 1942, her 13th birthday. According to The Anne Frank House, the red, checkered autograph book which Anne used as her diary was actually not a surprise, since she had chosen it the day before with her father when browsing a bookstore near her home. She began to write in it on June 14, 1942, two days later. On July 5, 1942, Anne′s older sister Margot received an official summons to report to a Nazi work camp in Germany, and on July 6, Margot and Anne went into hiding with their father Otto and mother Edith.

Thirteen’s Spring explores those few days, although it plays with the timeline a bit, compressing the period from June 12 to July 6 seemingly into a single day (in the play, Anne gets the diary on the morning of her birthday, and seemingly goes into hiding that evening). The play, written by Amanda Jane Shank (FB) and directed by Fernando Belo (FB), principally focuses on two things: Anne’s budding relationship with “Hello” (Helmut “Hello” Silberberg), and the preparation of Anne’s parents for the escape into hiding, and its effect on Anne. It captures well Anne’s enthusiasm for life and her uncertainty of her budding romance. It also captures well what must have been Anne’s confusion at her parents’ preparations (selling family possessions; moving others into the attic ahead of time). Lastly, it portrays well Anne’s surprise when it was time to go, without warning.

This was a Fringe production, and in their program they note that they “hope to use this opportunity at the Hollywood Fringe Festival to expand our audiences and develop the piece further”. I spent some time this morning, as I researched and wrote this, thinking about that question. The question that keeps coming to mind is: Is the Anne we meet when the play opens the same Anne as at the end of the play, and how do we make that clear. The Anne of the original book resonated with people because of the combination of youthful naiveté, wisdom, and optimism. Did these few days shape that, or did they create or change something about Anne? Figuring out the way to address dramatic visualization of that transformation would appear to be the “development” that would be appropriate. The other characters in the piece are the catalysts for Anne’s growth — and like catalysts, enable the reaction while staying unchanged or minimally changed.

Even without the further development, I think this piece is strong and a potential facilitator of good discussion. In addition to the story exploration, the strength comes from excellent performances. In the lead position was Nora King (FB) as Anne. King’s Anne was playful, girlish, innocent, and seemingly open to the world in front of her, not wanting to give it up. When you realize that this was being portrayed by an adult actress (I hesitate to use the word “older”), it is all the more impressive. Playing off her as her potential first boyfriend was Joseph Tanner Paul (FB) as “Hello”. Paul captured equally well the uncertainty that boys go through at the same time: wanting to take the lead, to initiate something (but they don’t know what), while being scared to do so at the same time. Again, well captured and well performed.

Anne’s parents were portrayed by Michael Bates/FB [Otto Frank] and Elena Sanz (FB) [Edith Frank]. The two captured well the concern the parents must have had — concern not only with the upcoming disruption in their lives, but how that would play out for their daughter at this time in her life.

In terms of remaining technical and creative credits, there are only two in the program: Jesse Fryery (FB) as lighting designer, and Stephanie Petagno as Costume Designer. Presumably, the scenic design came from the director, Fernando Belo (FB). This design was relatively simple: suitcases, boxes, a table and chairs, and some lamps to represent the Frank home, and…. well, nothing really to represent the world outside the home. Fryery’s lighting design worked well to support the desired mood and to focus attention to the action… and the opening in the dark was spectacular. Petagno’s costumes seemed appropriately period, but I’m not an expert on period costume. If I had one comment on the design aspects, it was that nothing indicated that this was a Jewish family at all. That may have been intentional: I think Anne Frank’s diary resonated with so many precisely because Anne wasn’t one of those scary, different, Orthodox Jews with their odd dress and customs, but a secular Jew. She looked and behaved like everyone else, amplifying the sense that this was a typical family and the terror they faced could be faced by anyone. Thirteen’s Spring was produced by Emily Mae Heller (FB), Nora King (FB), and Fernando Belo (FB); it was presented by The Moving Art Collective (FB).

There is one more encore performance of Thirteen’s Spring: tonight at 7:30 PM. Tickets are available through the HFF site, or at the door.  I think it is well worth seeing.

Ob. Disclaimer: I am not a trained theatre critic; I am, however, a regular theatre audience member. I’ve been attending live theatre and concerts in Los Angeles since 1972; I’ve been writing up my thoughts on theatre (and the shows I see) since 2004. I do not have theatre training (I’m a computer security specialist), but have learned a lot about theatre over my many years of attending theatre and talking to talented professionals. I pay for all my tickets unless otherwise noted. I am not compensated by anyone for doing these writeups in any way, shape, or form. I currently subscribe at Cabrillo Music Theatre (FB), the  Hollywood Pantages (FB), Actors Co-op (FB), and I plan to renew my mini-subscription at the Valley Performing Arts Center (VPAC) (FB). Past subscriptions have included  The Colony Theatre (FB) (which went dormant in 2016), and Repertory East Playhouse (“REP”) (FB) in Newhall (which entered radio silence in 2016). Through my theatre attendance I have made friends with cast, crew, and producers, but I do strive to not let those relationships color my writing (with one exception: when writing up children’s production, I focus on the positive — one gains nothing except bad karma by raking a child over the coals).  I believe in telling you about the shows I see to help you form your opinion; it is up to you to determine the weight you give my writeups.

Upcoming Shows:  Tonight sees us out in Thousand Oaks for The Little Mermaid at  Cabrillo Music Theatre (FB). The end of July gets busy, with Weird Al Yankovic at the Hollywood Bowl (FB) on July 23, Operaworks (FB) Opera Re-Constructed at CSUN on July 24, and a mid-week Hollywood Bowl (FB) concert of Wynton Marsalis and Aaron Copeland on July 28, and … currently nothing for the weekend. August is a bit more open in terms of theatre. The first weekend just has a Jethawks game on Sunday; the second weekend has a Bar Mitzvah.  The third weekend brings another event from the wonderful counter-cultural orchestra, Muse/ique (FB) — American/Rhapsody — a celebration of George Gershwin. Late August sees us looking at shows down San Diego/Escondido for one weekend. The best of the shows available — or at least the most interesting — is Titanic from Moonlight Stages. September returns to conventional theatre. The first weekend has a HOLD for Calendar Girls at The Group Rep (FB). The second weekend may be another Muse/ique (FB) event — Summer/Time, a reimagined retelling of Porgy and Bess. The third weekend has a HOLD for Ma Rainey’s Black Bottom at the Mark Taper Forum (FB). The last weekend is The Hunchback of Notre Dame at The La Mirada Theatre for the Performing Arts (FB).

Continuing the look ahead: October is a bit more booked. The first weekend brings Dear World at the Valley Performing Arts Center (VPAC) (FB) and Our Town at Actors Co-op (FB), as well as the start of the High Holy Days. The second weekend has another Valley Performing Arts Center (VPAC) (FB) event: this time for Jazz at Lincoln Center Orchestra with Wynton Marsalis. The third weekend has yet another VPAC event: An Evening with Kelli O’Hara on Friday, as well as tickets for Evita at Cabrillo Music Theatre (FB) on Saturday. The following weekend brings Turn of the Screw at Actors Co-op (FB) on October 22 and the new Tumbleweed Festival (FB) on October 23. The last weekend of October brings Linden Waddell’s Hello Again, The Songs of Allen Sherman at Temple Ahavat Shalom (a joint fundraiser for MoTAS and Sisterhood). Oh, and if that wasn’t enough, October is also the North Hollywood Fringe Festival (FB), and it looks like a theatre in Pasadena will be presenting the musical Funny Girl. November is still in the planning stages, but we know it will include Hedwig and the Angry Inch at  the Hollywood Pantages (FB); a Day Out With Thomas at Orange Empire Railway Museum (FB) [excuse me, “Southern California Railway Museum”]; the Nottingham Festival (FB); and possibly Little Women at the Chance Theatre (FB) in Anaheim. As always, I’m keeping my eyes open for interesting productions mentioned on sites such as Bitter-Lemons, and Musicals in LA, as well as productions I see on Goldstar, LA Stage Tix, Plays411 or that are sent to me by publicists or the venues themselves.