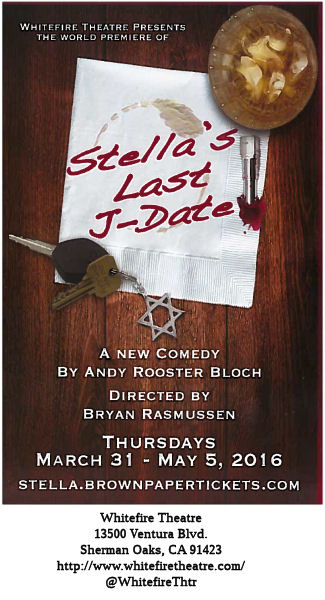 Selecting theatre is a lot like going on a blind date. You peruse a list of shows, swiping left, swiping right, until something piques your interest. But before you commit to seeing it, you do a bit of research. You read the press release. You read reviews of the show. You look at the Lemonmeter. This is very similar to the online dating scene: you review profiles and you mark some for future investigation. You read their background. You look at their ratings (perhaps from others that went out with them). For both shows and dates, in the end, you pick one that you hope is compatible with your taste.  However, that selection doesn’t always work out, for your tastes may not agree with others. Everyone else can like the person or show, and it might have off tastes or characteristics for you. That doesn’t make it bad; that just makes it something that you might not like. Further, people and shows can be like cilantro: over time and with enough exposure, you can grow to love them.

Last night, we saw Stella’s Last J-Date at the Whitefire Theatre (FB) in Sherman Oaks. The show looked like it would be a winner: the press-release writeup sounded interesting, there were some great performers in the show, and it was universally loved over on Bitter Lemons. And, for the most part, we enjoyed it. For the most part, as there was some small percentage that hit wrong, that left us a little confused. That’s happened before: I remember one show at ZJU that everyone was hysterical over while we were just… whelmed (neither over nor under). That also happened with the recent Bach at Leipzig over at Group Rep — everyone else loved it, but something was off for us (although not quite as bitter as B-L made us out to be).

Stella’s Last J-Date is simply that: we’re the fly-on-the-wall watching Stella, a neurotic Jewish female dog trainer of unspecified middle age (I’d guess in her 40s) out on a date arranged by J-Date. Her date of the evening is Isaac, a 50-60s fellow who is a 5th grade teacher. The entire evening consists of their determining whether they are compatible, exposing their particular neuroses and quirks, coming together and blowing apart, and so forth. We learn secrets about each. We learn the color of their baggage. They slap. They hit. They make fun of their problems. Periodically, the evening is punctured with the appearance of Don, a black pimp-like character who seems to beat up Isaac to give up trying to like Stella. Don seems to know secrets about both Isaac and Stella, and appears to be warning Isaac to run… run…. run…. and don’t look back.

Let’s get the most important part out first: This is a funny show. Even as the underlying story left us a little confused (more on that in a moment), there were some wonderful jokes that had us really laughing along the way. I can’t remember most of them, but I do remember one about how Jewish women don’t care how much something costs, but how much they saved. There were great comedic performances, verbal and non-verbal. So where was the problem?

Thinking about the show afterwards, I can see three areas that may have made things difficult for us, and that might not have bothered others:

So, with respect to the story by Andy Rooster Bloch (FB), is this good or bad? I think it is clearly funny. Very funny. Laugh out loud funny. But, at least for me, funny isn’t enough. I want that funny to come from someplace deeper, and not just be one-liners tossed off to hide the pain. There’s a something more that is needed here to move this from sitcom to story. It’s good as it is, but is good enough? I’m not sure. I guess I would characterize it as the difference between Gilligan’s Island and Cheers: Does the character of Gilligan change from the beginning of the series to the end? Does the character of Sam change from the beginning to the end? Which has endearling long-lasting watchability? However, as I said, theatre is like dating, and I may be looking for different things in my theatrical matches than others are. This could be your perfect date. 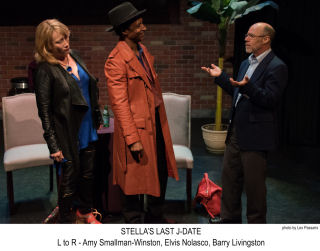 One thing that is not a problem is the performances. The cast, under the direction of Bryan Rasmussen (FB), is very strong. I was particularly impressed by Barry Livingston (FB)’s performance as Isaac. Of course, I remember Barry from My Three Sons (and I have an even vaguer recollection about him being a kid in Westchester, near the airport, and possibly in the same Cub Scout troup back in the 1960s). Barry was spectacular — especially for what he didn’t say. The opening scene, which is essentially non-verbal reaction and movement from Barry, was priceless. He has the ability to convey wonderous information with his body and face. This continued throughout the show, and I think his performance was one of, if not the main, highlights of the show. His performance wasn’t comic slapstick — it was a mixture of pathos, Buster Keaton, and exasperated bemusement. If you go see this, watch him and I think you’ll be as impressed as I was.

Amy Smallman-Winston (FB) played the neurotic Stella. She captured the neuroses and craziness of the character well — she was certainly someone that I wouldn’t want to be involved with. She was clearly able to handle the physical comedy well, but didn’t have the same level of character study moments to exploit. Somehow, given the ending, she needed something a little bit more to hint at it. She did have the most comic lines in the show and tossed them off with perfection.

Lastly, there was Elvis Nolasco (FB)’s Don. His character was an enigma: it is hard to know if he was portraying it well without knowing what it was supposed to be. I can, however, safely say that he was fun to watch, and his interactions with Barry’s Isaac were quite good.

Bryan Rasmussen (FB) also did the scenic design, and it was relatively simple: tables and chairs to create the impression of a bar, with projections by David Svengalis (FB) to place it in New York. The simple set worked well, especially considering that the one stage at the Whitefire is having to serve at least three different shows each week (so complicated set treatments weren’t possible). The lighting of Derrick McDaniel (FB) served to enhance and create the mood. David Svengalis (FB) was also responsible for the sound and video design; my only comment here was that the opening sounds of the bar were just a little too loud. I don’t have that much to say about the costume design of Morgan DeGroff (FB) [assisted by Laura Tiefer (FB)] other than they appeared reasonable (although Don’s outfit might have been the source of confusion about his character). Remaining production credits: Nancy Santiago/FB [Assistant Director]; Mike Mahaffey (FB) [Fight Choreographer]; Ricki Maslar, CSA (FB) [Casting Director], Nora Feldman (FB) [Public Relations], David Svengalis (FB) [Technical Director]; Neda Ganjeh-Tabe/FB [House Manager]; and Scott Disharoon (FB) [Producer]. Stella’s Last J-Date appears to be a production of the Whitefire Theatre (FB) [I say appears to be, because with three productions going on, I’m not sure which are productions of the home company, and which are rentals from outside producers. The involvement of Whitefire’s Artistic Director, Bryan Rasmussen (FB), makes me believe this is a Whitefire show.]

Stella’s Last J-Date continues on Thursdays at the Whitefire Theatre (FB), with an extended run through May 26, 2016. Tickets are available through Brownpaper Tickets, as well as through Goldstar.

Upcoming Shows: This weekend is our annual visit to the Renaissance Faire (Southern). Next weekend is Pesach, but we are squeezing in a show on Sunday when we go see Anton in Show Business at Hollywood’s Hudson Mainstage Theatre (FB). The last weekend of April will be the Four Clowns (FB) production of Lunatics and Actors at the LA Shakespeare Center on April 30. May starts with Endgame at the Kirk Douglas Theatre (FB). We then run off to the Bay Area for our daughter’s graduation from Berkeley. While there, we are seeing the Landmark Musical Theatre (FB)’s West Coast Regional Premiere of The Boy from Oz (but pay no attention to that production behind the curtain at the Celebration Theatre (FB) — if they start the same day, they are simultaneous premieres and both have equal bragging rights). We may also be seeing The Last 5 Years at San Francisco’s American Conservatory Theatre (A.C.T.) (FB).  May 21 has a HOLD for Los Angeles: Then and Now, a new musical at LA City College (FB) from Bruce Kimmel. The last weekend of May has HOLDs for the MoTAS Outing to the Jethawks, and for I Only Have Eyes for You at the Ricardo Montalbán Theatre (FB). As for June? It’s the Hollywood Fringe Festival (FB), and I’ve started to hold dates for the following shows: Alien vs. Musical ✨ All Aboard the Marriage Hearse ✨ All The Best Killers are Librarians ✨ Code 197 DWB (Driving While Blewish) ✨ Qaddafi’s Cook — Living in Hell, Cooking for the Devil ✨ Squeeze My Cans ✨Tell Me On A Sunday  ✨ Toxic Avenger: The Musical  ✨  Vintage Box ✨ Einstein ✨Titus Andronicus Jr. ✨The Old Woman ✨Sweet Love Adieu ✨ My Big Fat Blond Musical✨Doctor in the House ✨ Hamlet (Las Vegas Style) ✨. But that’s just a small percentage; there are over 240 shows listed now.  We thought about Love The Body Positive, but then again… no. Can’t be scaring people.  July brings us back to conventional theatre, with for Beautiful at the  Hollywood Pantages (FB) and the Western Corps Connection (FB) the first weekend, a HOLD for Grey Gardens at the Ahmanson Theatre (FB) the second weekend, The Little Mermaid at  Cabrillo Music Theatre (FB)  the third weekend, a HOLD for Weird Al Yankovic at the Hollywood Bowl (FB) and Operaworks (FB) Opera Re-Constructed at CSUN the fourth weekend, a mid-week Hollywood Bowl (FB) concert of Wynford Marsalles and Aaron Copland, and a HOLD for Armadillo Necktie at The Group Rep (FB) the last weekend.  As always, I’m keeping my eyes open for interesting productions mentioned on sites such as Bitter-Lemons, and Musicals in LA, as well as productions I see on Goldstar, LA Stage Tix, Plays411 or that are sent to me by publicists or the venues themselves.