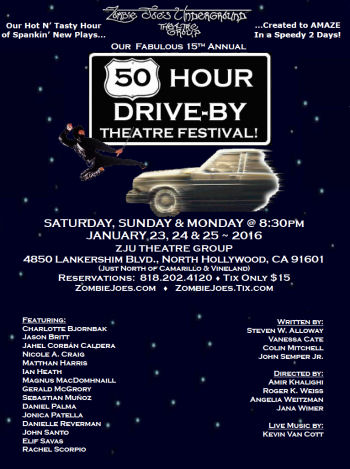 When I was young, Harlan Ellison would often sit in the window of A Change of Hobbit on Westwood. He would be given a story idea from a patron, and would write a short story in a day. A similar type of rapid creativity is a staple in the intimate theatre community: Something is used as a trigger for an idea, a writer uses that trigger to come up with a story, actors are thrown in, and something goes up on the stage — all within a 24 or 48 hour period. This is quick work and an exercise / demonstration of the creative muscle; it isn’t necessarily good or deep work. Most small companies I know do something like this.

Last night, we went to Zombie Joes Underground (FB)’s contribution to the genre: their 50 Hour Drive By Theatre Festival, now in it’s 15th year. In the ZJU version, the writers are given 3 props at random on Thursday at 6:15 PM, with pen on paper at 6:35 PM. Less than 24 hours later (Friday @ 5:30 PM) they turn in their scripts. Performers arrive at 7:45 PM, rehearsal starts. The next day (Saturday) at 4:15 PM the shows are pieced together, with the first performance at 8:35 PM. Fifty hours from pen on paper to actor in front of audience.

Sad to say, none of the four shows in last night’s drive connected with us. Some came close. But I’ve got a feeling we’re not typical, because others were finding them outrageously funny. Coming home, I tried to think about the best way to assess these shows. I wanted to try to figure out why they connected with so many, but not us. I came up with the following six parameters:

Let’s look at our four stories…

I think this story was one of the stronger ones in this set of shows. A tale about a criminal being interrogated, it integrated the props well — and for the most part, in a way that they needed to be what they were for the story to work. That integration showed creativity, and it made the story hang and work together. Some of the performances were very strong — in particular, Santo’s Chupacabra and Reverman’s Sumaru. McGrory clearly hadn’t quite gotten all his lines yet (but this was the first show), but the actors seemed to improvise well and have fun with it. They seemed to inhabit their characters well, and you actually got them well. As for the WTF-factor: this one seemed to start off very sexual, but the reason for the sexuality actually made sense and worked within the story. The final WTF-factor, which I won’t reveal, also worked well.

I liked the point that was being made by this particular story: That there are people that communicate by words, and there are people that communicate by actions, and that relationship problems can occur when they come together and there’s a protocol mismatch. How that message was conveyed was…. less than effective. I’ll add: “for me”, because most of the rest of the audience found this hilariously funny. I don’t believe the props were integrated into the story well at all: for example, the fact that the bandanna was camouflage was pointless to the story: it could have been a red scarf or a blindfold without changing things. Similarly, the selfie stick was used briefly and disappeared; the child’s necklace referenced twice with little strong connection to the story. The story was also a little incoherent: I couldn’t really figure out the reason for Adolfo and Bartolo — why they were there, or the role that they were fulfilling. This had some good performances:  Muñoz was suitably silly, and I liked both Britt’s and Savas’s performances quite a bit. As for the WTF-factor: This is one of those shows that had nudity/in-your-face sexuality … but I don’t think it worked for the story. In particular, it created or demonstrated the mistaken impression that “sex” ≡ “love”, and that is clearly not the case. I think there were equal ways to demonstrate the love between the characters, and that the out-there gay sexuality between Adolfo and Bartolo, while well played and funny to much of the audience, just didn’t add much to the story.

This was another strong show that used the props well. In this case, the eyeballs could give glimpses of the future or of the past. In this case, the protagonist was a father. In the past was the death of his son; in the future were two ways he could deal with his anger over the dealth. The story hung together well, except for the last minute. Performances were strong — Harris was a suitably creepy and odd salesman, and Palma made a quite affecting dad/central character. The creativity was also good — I liked the use of the eyeballs and how they formed the center of the story. As for the WTF-factor: it wasn’t strong at all (this is a good thing), except for the closing tag. Perhaps the oddest thing were the eyeballs themselves.

I often like Colin’s stuff, but this one left me … well, it was quite odd. I don’t believe the story integrated the props well at all: the fact that the tickets were tickets, or were to a Neuropathy Event, had nothing to do with the story; the cord had no real significance as a cord; and as for the fish — it was a magical McGuffin. There was no special significance to it being a fish. Although the story played well, I’m not sure it hung right with respect to motivations or logic. Why were they cross-dressing? Why was there so much emphasis on masturbation? The latter also contributed to a problematic WTF-factor: From the opening scene to the final reveal, there was a sexual nature that served to be purely gratuitous, serving more to be there just to be there than to contribute something to the story. In fact, the final reveal could have been done in a number of ways to make the same point without the sex. Whereas I could deal with most of the story, the end just didn’t work right.

The show featured opening and interstitial music by Kevin Van Cott (FB). I could have done without the opening drumbeat — it was a bit repetitious and was too loud, but the rest worked well. I particularly appreciated the electric ukulele. Sound engineering was by Randy Long and it worked reasonably well. I think there were some medical sounds that were missing during Shadows of Paul. There were no credits for lighting, costumes, or any of that such stuff. ZJU is an experimental black box with no scenery, and I presume the actors designed their own costumes, such as they were. The 50 Hour Drive-By Theatre Festival was produced by Zombie Joe.

Now for the obligatory Zombie Joe comment, which I seem to make every time I visit Zombie Joe’s: their website. Sigh. Their website design, which looks like an old Homestead website because it is an old Homestead website, is truly stuck in the early 1990s era of web design, with a flashy and garish background, poor organization, and what looks to be a non-responsive design. Just as I need to update my highways site, they need to update theirs. Their productions are so good, that their website shouldn’t look so amateurish. So, Mr. Randy Long. You’re their webmaster. Please make their site better — ZJU deserves it.

The 50 Hour Drive-By Theatre Festival! has two more performances: tonight (1/24) at 8:30 PM, and Monday (1/25) at 8:30 PM. Should you go see it? That’s a harder question for me. Clearly there were those in the audience that loved it, and enjoyed the type of “out there” humor and rawness in the show. If you’re that type — go, you’ll love this. For me, this year’s outing was more “meh”… but I’ll give them points for trying. Some of the attempts (❶ and ❸ above) were reasonably good, ❷ had a good premise but poorly executed, and ❹was a WTF? Tickets ($15) are available online, or by calling 818-202-4120 and making a reservation.

However, I’ll note that the occasional “meh” is just an inherent risk with this particular type of quick and dirty artform. It is an creativity exercise, a way of building the muscle in a manner that using a well-established script by a well-established writer cannot do. It is an “on the edge” artistic collaboration … and sometimes when you are on the edge, you fall off. However, dealing with the danger is part of what makes the show unique.

Ob. Disclaimer: I am not a trained theatre critic; I am, however, a regular theatre audience member. I’ve been attending live theatre in Los Angeles since 1972; I’ve been writing up my thoughts on theatre (and the shows I see) since 2004. I do not have theatre training (I’m a computer security specialist), but have learned a lot about theatre over my many years of attending theatre and talking to talented professionals. I pay for all my tickets unless otherwise noted. I am not compensated by anyone for doing these writeups in any way, shape, or form. I subscribe at two theatres:  The Colony Theatre (FB), and Cabrillo Music Theatre (FB). In 2015, my intimate theatre subscription was at REP East (FB), although they are reorganizing and (per the birides) will not start 2016 shows until August. I may move the subscription to The Group Rep (FB), or I may just get individual tickets there through Goldstar. Through my theatre attendance I have made friends with cast, crew, and producers, but I do strive to not let those relationships color my writing (with one exception: when writing up children’s production, I focus on the positive — one gains nothing except bad karma by raking a child over the coals).  I believe in telling you about the shows I see to help you form your opinion; it is up to you to determine the weight you give my writeups.