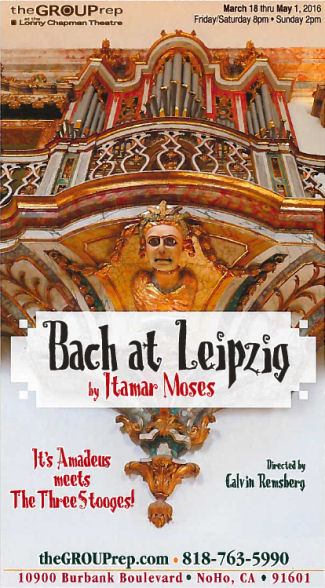 Yes, I know the quote really is “Too many notes”, and it applies to Mozart, but go with me here….

Yesterday afternoon, we trundled over to The Group Rep (FB) to see our second show of the weekend: Bach at Leipzig. It was advertised as a farcical comedy: Amadeus meets the Three Stooges. The description of the show on the website was as follows:

Leipzig, Germany – 1722. Johann Kuhnau, revered organist of the Thomaskirche, suddenly dies, leaving his post vacant. The town council invites musicians to audition for the coveted position, among them young Johann Sebastian Bach. In an age where musicians depend on patronage from the nobility or the church to pursue their craft, the post at a prominent church in a cultured city is a near guarantee of fame and fortune -which is why some of the candidates are willing to resort to any lengths to secure it. The play is a fugue-like farcical web of bribery, blackmail, and betrayal set against the backdrop of Enlightenment questions about humanity, God, and art.

Alas, as a famous actor once said,  “Dying is easy. Comedy is hard.”. And if comedy is hard, pulling off a farce successfully is even harder. Although the author, Itamar Moses, and the director, Calvin Remsberg (FB), try to pull it off — alas, they don’t. Let me describe the story, and then we can try to figure out where the problem lies.

As noted before, it is 1722, and the greatest organist in the world, Johann Kuhnau, has died. A number of musicians are vying for the post, all of whom either have the first name of Johann or Georg. They are also all trying to eliminate the others so they can get the position. That, actually, is really the plot.

The show starts with a lot of exposition. A lot. This exposition continues throughout the show by the characters all writing letters to their wives, who all seemed to be named Anna, and giving them to carrier pigeons to send. There’s a lot of intrigue back and forth, and a bunch of running jokes on the first name of the characters. There is an attempt to draw the structure as a parallel to a fugue with multiple voices all coming together to echo the same point. If you didn’t realize it, it is hammered home with some more exposition at the top of Act II.

It should work. In fact, reading some reviews of other productions, I think it has worked elsewhere. But for me, aside from a few good lines, it was a little flat. I think the problem was two-fold. First, the long portions of exposition doesn’t serve the show well. The author needs a better way to get the audience into the context of the story than the artifice of all the letters, and they just serve to slow things down. Talk. Talk. Talk. This is theatre. There should be acting, not loads of monologues. Secondly, for farce to work it needs to be fast-paced and extremely well timed. It should hit you like a one-two punch, surprising you with one silliness before you’ve had time to process the last. This version was much too slow-paced, especially in the humor. The confusion at the various points needs to be amplified. The tempo needs to be upped, and that might even overcome the problem with the words.

Other than the tempo problems, I think the performances themselves were pretty good. I particularly enjoyed the lead, Chris Winfield (FB), as Fasch: he opened the show, and he pretty much moved the action along. He just needed to move it a little bit faster 😁. I also enjoyed Troy Whitaker (FB)’s Lenck. He had the right touch of youthful overconfidence in his abilities to make him fun to watch. I’ve seen him a few times in other productions and found him strong there (and his voice reminds me, strangely, of John Delancie).

Lloyd Pedersen gave Kaufmann a wonderful clueless dandy nature that was fun to watch. Larry Eisenberg (FB)’s Schott had a wonderful air of treachery around him.

The remaining two characters, Mikel Parraga-Wills (FB)’s Steindorff and Todd Andrew Ball (FB)’s Graupner, left less of an impression. I’m not sure what to make of Parraga-Wills’ Steindorff — Haughty, Handsome, but otherwise not leaving much of an impression. Similarly, Ball’s Graupner left a minor impression. I’m not sure whether that was the author’s intent — that they be minor strands in the overall fugue — or it was how it was played.

Lastly, there was Steve Terrell/FB‘s “Greatest Organist in Germany”. I hear he has a wonderful speaking voice.

Turning to the production team:  The scenic and lighting design of J. Kent Inasy (FB), was a reasonably adaptable series of faux-marble arches that were suitable for the various court discussions (this wasn’t a prop-heavy play, other than the various hiding places for music — another running gag).  Steve Shaw (FB)’s sound design worked well, particularly the directionality of the organ music. A Jeffrey Schoenberg (FB)’s costumes were excellent, which isn’t a surprise when you realize he’s been working in the Renaissance costuming field for ages. Adam Conn (FB) seemed suitably realistic to this non-fencing expert. Michele Bernath (FB) was the assistant to the director, and the producer was Suzy London (FB).

[ETA: One additional note on the show I just remembered: This is an era where there is loads and loads of talk of diversity in the theatre: both onstage and offstage. I found myself thinking about this as I noticed there was not one female part in this production. If we want audience diversity, we must demonstrate diversity in what is presented.]

Bach at Leipzig continues through May 1, 2016 at The Group Rep (FB). Tickets are available through the Group Rep website. Discount tickets may be available on Goldstar or on LA Stage Tix.

Upcoming Shows: The third weekend of March takes us back to the Pasadena Playhouse (FB) on March 19 to see Harvey Fierstein’s Casa Valentina, followed by Bach at Leipzig at The Group Rep (FB) on March 20.  The last weekend of March brings “A Gentleman’s Guide to Love and Murder” at the Ahmanson Theatre (FB) on Saturday, followed by A Shred of Evidence at Theatre 40 (FB) on Sunday.  April will start with Lea Salonga at the Valley Performing Arts Center (VPAC) (FB) on April 1 and an Elaine Boosler concert at Temple Ahavat Shalom on April 2 (this concert is open to the community; get your tickets here). We have a mid-week concert of the Turtle Quintet at the Valley Performing Arts Center (VPAC) (FB) on April 7, followed by “Children of Eden” at Cabrillo Music Theatre (FB) on April 10. The next weekend’s theatre is on Thursday, because the weekend brings our annual visit to the Renaissance Faire (Southern). The Thursday show is Stella’s Last J-Date at the Whitefire Theatre (FB). The fourth weekend in April is is Pesach, but the Indie Chi Productions dark comedy Dinner at Home Between Deaths at the Odyssey Theatre (FB) sounded so interesting I’ve booked Sunday tickets. The last weekend of April has a hold date for The Boy from Oz at the Celebration Theatre (FB). May starts with a hold date for Endgame at the Kirk Douglas Theatre (FB). We then run off to the Bay Area for our daughter’s graduation from Berkeley. While there, we may squeeze in a show: the Landmark Musical Theatre (FB) is doing The Boy from Oz (if we miss it at the Celebration), but otherwise the pickings and concerts are bare. May 21 has a hold for Los Angeles: Then and Now, a new musical at LA City College (FB) from Bruce Kimmel. The last weekend of May has holds for the MoTAS Outing to the Jethawks, and Armadillo Necktie at The Group Rep (FB). As for June? It’s the Hollywood Fringe Festival (FB), and I’ve started to hold dates for the following shows: All Aboard the Marriage Hearse ✨ All The Best Killers are Librarians ✨ Qaddafi’s Cook — Living in Hell, Cooking for the Devil ✨ Squeeze My Cans ✨Tell Me On A Sunday  ✨ Toxic Avenger: The Musical  ✨. As always, I’m keeping my eyes open for interesting productions mentioned on sites such as Bitter-Lemons, and Musicals in LA, as well as productions I see on Goldstar, LA Stage Tix, Plays411 or that are sent to me by publicists or the venues themselves.