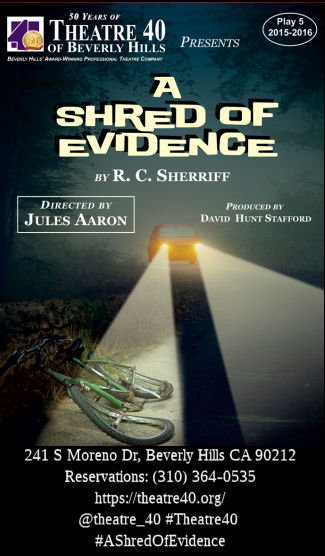 Distracted and impaired driving. This is a major factor as to why our roads are unsafe these days. From driving while drunk, high, or sleepy to fiddling with electronic devices while driving, anything that distracts the driver from paying attention to the road is bad. Luckily, there have been major publicity and educational campaigns about this. While we still have problems with drunk drivers, they are much less frequent thanks to folks like MADD. People know now to have a designated driver, and that even one drink might be too many. But that wasn’t always the case. It certainly wasn’t the case in 1958, which is the timeframe of the play we saw yesterday afternoon, A Shred of Evidence by R. C. Sherriff at Theatre Forty (FB) on the grounds of Beverly Hills High School.

A Shred of Evidence is a murder mystery about a man who was killed by an unknown driver on late evening in a suburb outside London. Unlike most murder mysteries — which are told with a focus on the investigator and the investigation — A Shred of Evidence is told from the perspective of another driver on the road that night. As the play opens, the driver, Richard Medway, has just woken up. In talking to his wife, Laura, he discovers the he had arrived home last night, disheveled. He had gone upstairs, leaving the car running and the garage door open for the local constable to find. Luckily, the constable had woken the wife and gotten everything closed down. He informs his wife that he will become a director of his company, with a substantial boost in pay (enough to send his daughter to Oxford — although the price — £250 — seems awfully low these days).

In further discussions, he learns that the car was damaged, and there is a stripe of green paint on the side.  Turning on the radio, he also learns that there had been accident on a local street where a driver hit a man on a bicycle, and then just driven off. He doesn’t think he had done it, but after a visit from a local questioning inspector, he isn’t so sure. As he thinks back on the incident, he realizes he had had a lot — perhaps too much — to drink and could have been driving drunk.

This is the focus of the play. Information keeps coming up that circumstantially appears to indict Richard, and Richard keeps working to convince everyone that he didn’t do it. As the days goes on, Richard discovers just how much he had to drink, and how much he doesn’t remember.

A few broad comments on the story itself. The play is long — perhaps 2.5 hours plus intermission. It’s not a musical, just lots of discussion and exposition to bring out the various factors. That can combine with a warm theatre, comfortable seats, and the modulation of the voices on stage to drowse one out — especially in a post-lunch production. I caught it happening to me a few times, and I saw it happening to other audience members. I’m not sure how to counter that, but perhaps a bit more emotion and either movement or modulation in the tones may help somewhat.

The second broad comment I alluded to in my introduction. The play focuses on a drunk driver. He’s the hero. Throughout the entire play, he’s working to actively cover up the fact that he drove while drunk — and his friends are enabling him. They are coming up with cover stories and buying into his rationalizations. To the modern mindset, that’s unconscionable. Would we cover up for a friend that had driven while drunk. Would we even let him get on the road (or would we call a cab or an Uber/Lyft)? This clash — between the values of 1958 and the values of today — needed some sort of framing to distract the mental gnashing. At minimum, some public service announcements in the program would probably have been appropriate.

Under the direction of Jules Aaron, the actors executed to story in a reasonable fashion. It is unclear if there were directorial choices that could have been made to up the energy, choices that might have addressed the perception of the length. I can’t answer that, but I can comment on one very puzzling directorial choice: at the end of every act or scene, melodramatic music would swell as on a soap opera. Puh-leaze. Musical manipulation of that sort is not necessary for this play, and it seemed forced (and even someone insulting to the audience).

In the lead positions were David Hunt Stafford (FB) as Richard Medway and Alison Blanchard (FB) as Laura Medway. The two made a believable couple; there was just a casual friendliness that comes from long-term relationships. Stafford handled the role well, although there were numerous odd hesitations and a few misstarts on lines that I rarely see these days. I’m going to chalk it up to a bad memory day — we all know that happens as we get older. Luckily, these mostly fit the character and the actor went with the flow. Rounding out the family in a much smaller role was Katy Yoder (FB) as their daughter, Pamela. She was fun to watch — bouncy and energetic and exuding fun. She brought that special spark that the show needed a bit more of.

The investigator of the accident was portrayed by Daniel Lench (FB), whom we know well from his numerous appearances on the boards at Repertory East Playhouse (FB). He gave yet another wonderful performance, bringing an interesting character, energy, and accent to the role.

Providing the support for the lead character (Richard Medway) were John Wallace Combs (FB) as John Cartwright, the Medway’s friend and solicitor, and Richard Hoyt Miller (FB) as Captain Foster, one of the two men that Richard had driven home that night. Combs made a strong Cartwright, coming across as friendly and concerned, and well informed about legal issues. He, too, had a just a few issues with line misstarts. Miller’s Foster was everything you would expect in a rugby-playing carpet salesman.

Rounding out the cast in smaller roles were Peter McGlynn (FB) as Mr. Bennett (the other man that Medway drove home), Esther Richman (FB) as Bennett’s wife, and Richard Carner as a police sergeant. My only comment here is that McGlynn came off as suitably menacing, but Richman’s portrayal of his wife seemed perhaps overly shrill. Suzan Solomon (FB) was the alternative for Mrs. Bennett.

On the production and creative side, the set design by Jeff G. Rack was sumptuous and elegant — a full detailed recreation of a British suburb house. The sound design by Joseph “Sloe” Slawinski (FB) provided appropriate sound effects, although I could have done without the aforementioned melodramatic music. The lighting design by Ric Zimmerman (FB) essentially emulated house lighting, meaning it was mostly whites and yellows and didn’t amplify the emotions. The costumes by Michele Young (FB) and Makeup / Hair / Wig Design by Judi Lewin (FB) worked together to appear suitable for the characters, although I can’t speak to authenticity for the locale or the era. Linda Brennan (FB) was the dialect coach. Don Solosan (FB) was the stage manager; Richard Carner was the assistant stage manager, and Jean Sportelli was the assistant director. David Hunt Stafford (FB) is the Artistic / Managing director of Theatre Forty (FB).

A Shred of Evidence continues through April 17 at Theatre Forty (FB). Tickets are available by calling 310-364-0535 or through their website. Discount tickets may be available on Goldstar or LA Stage Tix. Despite the length, we found the play enjoyable.

Upcoming Shows: April will start with Lea Salonga at the Valley Performing Arts Center (VPAC) (FB) on April 1 and an Elayne Boosler concert at Temple Ahavat Shalom on April 2 (this concert is open to the community; get your tickets here). We have a mid-week concert of the Turtle Quintet at the Valley Performing Arts Center (VPAC) (FB) on April 7, followed by “Children of Eden” at Cabrillo Music Theatre (FB) on April 10. The next weekend’s theatre is on Thursday, because the weekend brings our annual visit to the Renaissance Faire (Southern). The Thursday show is Stella’s Last J-Date at the Whitefire Theatre (FB). The fourth weekend in April is is Pesach, but the Indie Chi Productions dark comedy Dinner at Home Between Deaths at the Odyssey Theatre (FB) sounded so interesting I’ve booked Sunday tickets. The last weekend of April has a hold date for The Boy from Oz at the Celebration Theatre (FB) (although we may end up seeing the Landmark Musical Theatre (FB) in the Bay Area instead (support their kickstarter), meaning I have a weekend to program!). May starts with a hold date for Endgame at the Kirk Douglas Theatre (FB). We then run off to the Bay Area for our daughter’s graduation from Berkeley. While there, we may squeeze in a show: the Landmark Musical Theatre (FB) is doing The Boy from Oz, but otherwise the pickings and concerts are bare. May 21 has a hold for Los Angeles: Then and Now, a new musical at LA City College (FB) from Bruce Kimmel. The last weekend of May has holds for the MoTAS Outing to the Jethawks, and Armadillo Necktie at The Group Rep (FB). As for June? It’s the Hollywood Fringe Festival (FB), and I’ve started to hold dates for the following shows: All Aboard the Marriage Hearse ✨ All The Best Killers are Librarians ✨ Qaddafi’s Cook — Living in Hell, Cooking for the Devil ✨ Squeeze My Cans ✨Tell Me On A Sunday  ✨ Toxic Avenger: The Musical  ✨  Vintage Box ✨ Einstein ✨Titus Andronicus Jr. ✨The Old Woman ✨Sweet Love Adieu ✨ My Big Fat Blond Musical✨. We thought about Love The Body Positive, but then again… no. Can’t be scaring people.  As always, I’m keeping my eyes open for interesting productions mentioned on sites such as Bitter-Lemons, and Musicals in LA, as well as productions I see on Goldstar, LA Stage Tix, Plays411 or that are sent to me by publicists or the venues themselves.