Recently, I replaced my copy of the Last Days of the Late, Great State of California (out of print, but available used) by Curt Gentry. This book is primarily the story of the 1966 Gubernatorial campaign between Ronald Reagan (R), George Christopher (R), Edward G. “Pat” Brown (D), and Sam Yorty (D); it also notes the importance of California, and ends with California falling into the ocean after a 9.0 earthquake on the San Andreas Fault. This is really a wonderful book; I highly recommend it.

The key point of the book is how the 1966 election, coming on the heels of the incidents at UC Berkeley, the Watts Riots, the defeat of Goldwater, etc., mirrored what was going to happen in the nation. I just have to share a few paragraphs from the book as a telling example:

“On a few issues, Reagan was alarmingly specific.

If elected, he would investigate the University of California.

Also he would cut the costs of state prisons and mental hospitals. These institutions, according to the candidate, were nothing more than a “vast hotel chain” which could be run far more efficiently and economically by someone with background in hotel management.

There was, he noted, not a state office that couldn’t be better run by businessmen. If elected, he promised to solicit business and industry for help in running the state. (It was with some difficulty that one recalled Reagan’s onetime presidency of a union.)

As for federal aid, in most instances he was against it. Any activities of the federal government could be practiced more effectively at the local level. Take disaster relief. “Suppose a disaster happened next year,” he mused. “What do you think would happen if a Governor of California, instead of calling Washington, would get on the radio and television and say to the people of California, “These are our neighbors, our fellow Californians. This is what’s happened to them, this is what they need”? He had participated in many Hollywood benefits and was sure the same technique could be applied on a statewide basis.”

Just sort of speaks for itself.

Many people I know like to denegrate President Bush. Some like to actively support him. This is part of our political system, but must be kept in the realm of political speech, not personal attack. However, we should also acknowledge the president when he does something right.

Today, President Bush took responsibility for the failures of Katrina.

I commend him for the courage it took to make that acknowledgement, and not dodge the blame. Mr. President… you are right. You were responsible for the failures. Now fix the problem.

Took a break from cleaning the house to look at CNN. I see the following headline:

Specifically, at least two major corporate clients of lobbyist Joe Allbaugh, President Bush’s former campaign manager and a former head of the Federal Emergency Management Agency, have already been tapped to start recovery work along the battered Gulf Coast. One is Shaw Group Inc. and the other is Halliburton Co. subsidiary Kellogg Brown and Root.

The group that has done such a wonderful job rebuilding Iraq. Oh, and by the way, Vice President Dick Cheney is a former head of Halliburton.

Somehow, that stain on the dress is seeming less and less significant. Grrrr. 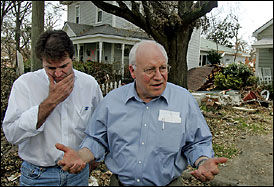 (This picture is credited to M. Spencer Green/Associated Press, and appears in today’s New York Times)

The breaking news on CNN:

Bush in New Orleans: We have got a lot of work to do and it seems dark right now.

Yes, Mr. President, it is dark, and therefore we are unable to work.

Sigh. At least I didn’t vote for this man. I betcha John Kerry would have used two-syllable words 🙂

Said by President Bush, in a press conference with Afghan President Karzai:

The worst problem that an ideologue that uses terror to try to get their way is to see a free society emerge.

Kinda’ speaks for itself, doesn’t it.

Another great quote from that conference:

PRESIDENT BUSH: Somebody from the Afghan press?

Lastly, I should note that President Karzai has a better command of the English language than, oh, never mind.

Note: This entry was originally posted on Observations Along The Road (on cahighways.org) as this entry by California Highway Guy. You may comment either here or there (where there are

Said by President Bush, in a press conference with Afghan President Karzai:

The worst problem that an ideologue that uses terror to try to get their way is to see a free society emerge.

Kinda’ speaks for itself, doesn’t it.

Another great quote from that conference:

PRESIDENT BUSH: Somebody from the Afghan press?

Lastly, I should note that President Karzai has a better command of the English language than, oh, never mind.

[Why am I using my revised laughing userpic? In addition to showing it off, if I wasn’t laughing, I’d be crying.]

I just finished reading the transcript of the State of the Union speech on CNN. We have just seen a facade presented by another facade.

(Climbs up on soapbox)