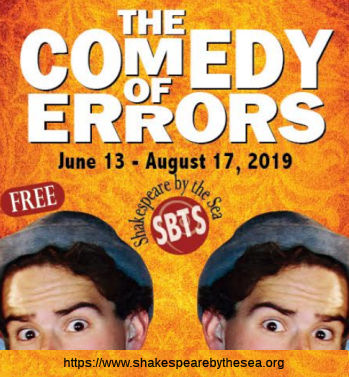 What would summer be without Shakespeare in an outdoor setting. Last year, it was in beautiful Lake Tahoe,  where alas the Scottish Play led to a food mishap for my wife before the show. This year we opted for a comedy, in a wonderful location next to the freeway in Long Beach. But the Scottish Play struck again with the food — more on that at the end. The production, on the other hand, was a delight: Shakespeare‘s A Comedy of Errors, which is being done in repertory with Henry V throughout Los Angeles and Orange County, from the South Bay to the Valley, by Shakespeare by the Sea (FB). The company is on tour throughout the southland, with forthcoming stops in Beverly Hills, Santa Ana, Torrence, Ranch PV, Pasadena, Whittier, Encino, Seal Beach, Aliso Viejo, Santa Monica … you get the idea.

A Comedy of Errors is a play I was seeing for the first time, although I had heard the music. Well, I had heard the music from The Boys from Syracuse, which was actually the first musical made from a Shakespeare play. That’s close enough. So I knew the basic plot. It really is a Shakespeare sitcom, as there is loads of mistaken identity. It is also a Shakespeare comedy, because everyone ends up in love and coupled off by the end of the play, including the servants.

Here’s the basic story, from the synopsis page on the website:

Aegeon, a merchant from Syracuse is arrested in Ephesus for violating a law barring travel between the two cities. He tells the Duke that he came to Ephesus seeking his wife and twin sons (both called Antipholus) and their servants (both called Dromio). They were separated in a shipwreck. Aegeon was rescued with one son and one servant but the other son and his servant were rescued by a different ship. Aegeon never knew what happened to the rest of his family. When Antipholus of Ephesus came of age, he and Dromio went in search of his twin brother. But when they never came home, Aegeon went out looking for all four of them. The Duke commiserates and gives him one day to pay a ransom or suffer the death penalty.

Was I right. It’s a sitcom.

It’s also very funny. Under the direction of James Rice (FB), the action is fast and furious, and the actors are given sufficient leeway to have fun with their roles and play a little bit to the audience. This is clearly fun for them, and that fun is contagious.

In the lead positions are Jonathan Fisher (FB) Antipholus of Ephesus, Alex Elliott-Funk (FB) Antipholus of Syracuse, Melissa Green (FB) Dromio of Ephesus, and Brendan Kane (FB) Dromio of Syracuse. These four were spectacular: they handled the dialogue well and made it so the audience could hear it (always important with Shakespeare). They handled the physical comedy well, and were extremely funny. I particularly liked the comic antics of both Green and Kane. They must just be so sore by the time the evening ends with all the running and jumping they do.

Primarily playing off of these four were Antipholus-E’s wife Adriana (Olivia Saccomanno (FB)) and her sister Luciana (Amber Luallen (FB)). These two were also very playful with their roles, as well as bringing beauty to the stage. They, too, got to have fun with the physicality of the roles, especially Luallen in her scenes with Kane.

Also critical to the story are the merchants who work with Antipholus-E, and the Courtesan who is his friend: Sean Spencer (FB) Pinch / First Merchant; Alden Bettencourt (FB) Second Merchant/Gaoler; Benjamin White (FB) Angelo; and Sharon Jewell (FB) Courtesan / Balthasar. Of these, I’d particularly like to highlight White’s performance. He’s the goldsmith, and he has quite a bit of fun with the role.

Haley Tubbs (FB) is the Luciana understudy on 8/17.

As I noted earlier, this summer’s season of Shakespeare by the Sea (FB) has many more performances until its last on August 17. Locations it will be visiting include Beverly Hills, Santa Ana, Torrance, Rancho Palos Verdes, S. Pasadena, Whittier, Encino, Seal Beach, Aliso Viejo, Santa Monica, Manhattan Beach, the Fairfax District, La Mirada, Cerritos, with the final performances in San Pedro. You have no excuse to go — the performances are free (although donations are accepted).

We really had a good time at the show. Now that we know about this, we’ll try to make it again next summer. Learn more about the show, its tour schedule, and how to reserve space at the Shakespeare by the Sea website.

Although the show was great, alas, I can’t say the same thing about dinner before the show. On the recommendation of a friend, we tried The Attic in Long Beach. It was my wife’s birthday, and we wanted some place sorta-foodie. We thought she would be safe: their menu marked what was gluten-free, and we let them know she was gluten-free — not by choice — when we made the reservation and placed our order. But the curse of the scottish play from last year followed us.

She ordered the shrimp with grits, which was marked Gluten Free.

It wasn’t. Somehow, she got poisoned with gluten, either as a direct ingredient or by cross-contamination. This is unacceptable; it left her sick all day. Enjoy the restaurant if you can handle gluten, but if you are at all sensitive — stay away. My wife has left a negative review on Yelp.

The last weekend of July brings West Side Story at 5 Star Theatricals (FB). August starts with an alumni Shabbat at camp, and The Play That Goes Wrong at the Ahmanson Theatre (FB). August ends with Mother Road and As You Like It at the Oregon Shakespeare Festival (FB). In between those points, August is mostly open.

Early September is also mostly open. Then things heat up, with the third weekend bringing Barnum at Musical Theatre Guild (FB), and the fourth weekend bringing Blue Man Group at the Hollywood Pantages (FB). October starts with The Mystery of Irma Vep at Actors Co-op (FB), and concludes with Mandy Gonzalez at the Soraya/VPAC (FB).  Yes, there are a lot of open dates in there, but I expect that they will fill in as time goes on.