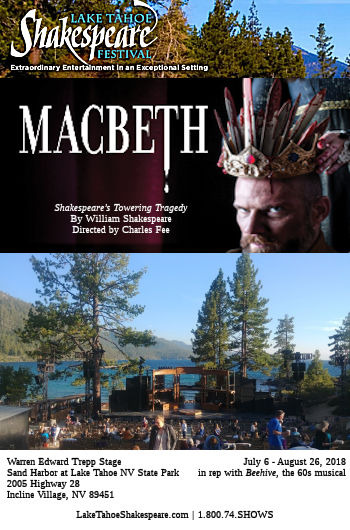 A few weeks ago, we were on vacation up in Lake Tahoe. We never let a vacation stop us from our interests, and one of those interests is good theatre. So I always check the listings and see what is in the area. In this case, we were able to catch the last performance of Macbeth at the Lake Tahoe Shakespeare Festival (FB). Summer is the time for outdoor Shakespeare, and we do enjoy hitting at least one show during the summer, so this fit well. The venue itself was beautiful; I snapped the picture to the right from our original seats at the show. There are two seeing areas: formal seating on dirt rows, and less expensive seating at the top and the sides with chairs set in sand. We were in the latter.

Our location is significant because this, after all, is the Scottish Play. The curse of the play hit us before the show, while we were sitting in our seats eating the dinner we had brought. My wife took a bit of her sandwich … and got a hornet, which stung her tongue and cheek. She was worried about an allergic reaction (as was I), and I had visions of trying to get her out through the sand … whereas she was worried about a helicopter evacuation. Luckily, one of the volunteers was an RN and had Benedryl with her. This was able to damp down the reaction; they also moved us much closer to the front to the handicapped seats so they could observe her and make it easier to get out in the dark. In any case, the incident unnerved us — and let me to put off doing this writeup until I bumped into having to write up another show.

We had another show last night.

One other note on the venue. In the tickets, they advise you that it gets cold in the evening. Believe them. Even though it was hot when we arrived, as the sun went down the altitude and thinner air led it to cool off very quickly. We were glad we had brought jackets and a blanket.

So, Macbeth, by William Shakespeare. Quite likely, you are familiar with the story of The Scottish King, who uses murder to achieve his position. A King who goes mad and kills his rivals. A king that sees conspiracies everywhere. A play with that famous line: “That struts and frets his hour upon the stage, / And then is heard no more. It is a tale / Told by an idiot, full of sound and fury, / Signifying nothing.”. I shant summarize the story as you can find it on Wikipedia.

This production, which was directed by Charles Fee, was magnificent. With Shakespeare, I find that the dated language and style make it harder to get into the story at the start, but once I got into it, this presentation gripped me. There was no attempt to modernize or change the setting of the story: this was traditional Shakespeare, told in a traditional fashion. I’ll note there were a few understudy substitutions that — due to my wife’s hornet sting — I didn’t note down. There was also one player performing with what appeared to be a strained or broken ankle in a cast or boot. Live theatre, folks. The show must go on, even a cursed one.

As I’m writing this three+ weeks post show, it is a bit harder to remember the tiers of performances. But some stand out even through the mists of times.

As the Scottish Prince, the thane of Glamis, Lynn Robert Berg (FB) was spectacular. I still remember the anger and evil that radiated from him, and the power of personality that held people in his thrall. Very, well, Trump-ish. Erin Partin (FB), was not like Melanie. She portrayed the Scottish lady as the Prince’s equal in evil, someone equal in plotting, but who was literally driven mad by it.

Also strong were the three weird sisters, Sara J. Griffin (FB), Meredith Lark (FB), and Jessie Cope Miller (FB). They had a movement and style that made their performance just great .. and somewhat unworldly. Just a joy to watch.

Also sticking out in my mind for their performances (but the specifics are lost) were David Anthony Smith (FB)’s King Duncan; Jonathan Dryud (FB)’s Banquo, and Christopher Tocco (FB)’s Macduff.

Turning to the production side: The scenic design by Russell Metheny was simple and Shakespearean, and appeared to make great use of the LTSF facility. Costumes by Kim Krumm Sorenson seemed appropriately period. The lighting design by Rick Martin I recall as being sufficient, but I think there was the occasional actor in the dark. The sound design by Matthew Webb was good during the show, but the sound used for the pre-show announcements was much weaker. Rounding out the credits were: Ken Merckx [Fight Choreography]; David Anthony Smith (FB) [Text and Speech Coach]; Casey Hagwood (FB) [Stage Manager]; Sarah Kelso (FB) [Asst. Stage Manager];  Jonathan Dryud (FB) [Fight Captain]. Macbeth was a co-production of the Lake Tahoe Shakespeare Festival (FB), the Idaho Shakespeare Festival (FB), and the Great Lakes Theatre (FB).

We caught the last summer performance of the LTSF and Macbeth at Sand Harbor. Were we back in the area, we’d look at future productions.

This weekend brings Ain’t Too Proud at the Ahmanson Theatre (FB) on Friday, followed by Paradise – A Divine Bluegrass Musical Comedy at the Ruskin Theatre (FB) on Saturday. The fourth weekend has Rope at Actors Co-op (FB), and the fifth brings Bark: The Musical at Theatre Palisades (FB). October is also getting quite full. It starts with Oppenheimer at Rogue Machine Theatre (FB). The following weekend brings Moon River -The Music of Henry Mancini at the Saroya [the venue formerly known as the Valley Performing Arts Center (VPAC)] (FB). The third weekend of October brings Shrek at 5 Star Theatricals (FB). October will close with the Contemporary Crafts Show in Pasadena.