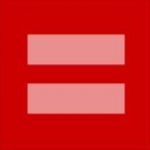 Facebook has turned into a river of red. Everyone is changing their user-pic to a pair of pink equals on a red background, an alteration of the Human Rights Campaign’s standard blue and yellow logo. The advocacy group, which “seeks to improve the lives of LGBT Americans,” has called on its followers to show support for marriage equality by doing this. They’ve followed suit, with all sorts of equal signs on a red background: bacon, matzah, wedding rings, and almost anything you can think of. Those who haven’t changed their Facebook user-pics have often expressed support in other ways, such as status updates.

Yesterday, I was one of those folks. I did what I believed was an innocuous status update in support of marriage equality. Or so I thought, at least. It ended up starting a vigorous discussion back and forth, with over 44 comments being posted (and the discussion was likely not over). So I felt that this morning I should write up my thoughts on the discussion and subject.*

Important Note: This is a statement of my opinion. It is not open for discussion. Got it? Good!

I am in favor of marriage equality. If two (or more) unrelated adult humans, all able to freely consent, wish to form a long-term relationship, I see absolutely no reason why the state shouldn’t recognize that relationship, and accord to it all the legal rights that go with what we call “marriage”: visitation rights, inheritance rights, formal dissolution rules. The odd wording is to cut off any discussion about adults marrying children (I do agree a line must be drawn), relatives marrying close relatives (Again, a line must be drawn, for different reasons), and any nonsense about marrying animals or inanimate objects and that such.

Oh, so you’re worried about children. Specious argument. Has nothing to do with the issue. Many marriages between opposite sexes do not produce children. This is simply about equality under the law for adult relationships. I’ll agree that the ideal is raising a child in a loving household with both a mother and father; but to me, the loving in the household trumps the requirement for the sexes of the parents to be different. If we can’t have the ideal, then we can at least have love.

Oh, so you’re worried about religion. Guess what? I’m not demanding that any religion recognize these marriages. I’m referring to recognition for legal purposes, for those that choose to have the relationships registered with the state. If they want it “blessed by God”, that’s between them and their clergy, and their clergy has every right to refuse. Separation of church and state and all that rot.

Oh, you want to call it something else, but have it equal in every other way. Look, “separate but equal” went out with Jim Crow. Loads and loads of laws refer to marriage and spouses. Changing them to use new terms to make things truly equal will take lots and lots of effort and cost lots and lots of money, just to make the “separate” be really “equal”. It is much easier and cheaper to just call it “marriage” — most importantly, because that’s what it is.

Oh, so homosexuals offend your sensibility and go against “God’s will”. Deal. Everyone offends someone: there are those offended by blacks, by Jews, by (name your group). Luckily, we live in a country that proclaims “liberty and justice for all”. This means that everyone must be equal under the law: irrespective of sex, skin color, religion, sexual orientation, or any other attribute.

So that’s my thought. I’m hoping that soon the Supreme Court will recognize that the societal view on this has shifted, just as it has shifted on interracial marriages and other marriages. Don’t believe me? I suggest you study the history of marriage.

(*: This was written before I got to work; with a final review and post as soon as I arrived and got my tea)

Today’s lunchtime news chum brings together a number of articles related to happenings on campus:

Music: Once On This Island (Original Cast): “When We Are Wed”