As I work on clearing out the accumulated links in preparation for the Friday News Chum clearing, here are some articles all related to history:

P.S.: There’s an election coming up. Read. Investigate. Be informed. I’m going through my sample ballot, and you can find the results of my research in the following two posts (a third should be up by this weekend):

Harry Harrison was one of my two introductions to the genre of Science Fiction*. Back when I was in high school, the Science Fiction Club at Pali High (in Mr. Layton’s room) introduced me to Harrison’s novel Captive Universe. I can still remember the lines:

“Now follow closely my thoughts because they are of the lougest importance. This man is of the valley yet he cannot return to the valley. I will tell you why. It is written in the klefg that the people of the valley, the derrers, shall not know of the Watchers. That is ordained. This one will then not go back to the valley.

“Now listen closely again. He is here, but he is not a Watcher. Only Watchers are permitted here. Can anyone tell me what this means?”

There was a long silence, finally broken by a weak voice which said, “He cannot be here and he cannot be in the Valley too.”

This was the start of a long love of Harry Harrisons books. Through the Deathworld trilogy, through all the Stainless Steel Rat books, through his teen work, and especially all of his alternate histories — I devoured it all.

Harrison had a way of writing that I just love; that just gabbed you. Just look at the first line of Bill, the Galactic Hero:

Bill never realized that sex was the cause of it all.

Great opening line. Then there was the fabulous Star Smashers of the Galaxy Rangers, a parody of all the EE Doc Smith 1950s-style SF. Again, just listen to those opening lines:

“Come on, Jerry,” Chuck called out cheerfully from inside the rude shed that the two chums had fixed up as a simple laboratory. “The old particle accelerator is fired up and rarin’ to go!”

“I’m fired up and rarin’ to go too,” Jerry whispered into the delicate rose ear of lovely Sally Goodfellow, his lips smacking their way along her jaw towards her lips, his insidious hands stealthily encircling her waist.

This is a story where Chuck and Jerry, two fun-loving students at an American College discover a faster-than-light space drive, and install it into the football team’s Boeing 747. They, together with the lovely Sally Goodfellow, crusty Pop, and loveable old John veiw with horror a practical joke gone awry as the plane screams off to Titan. But that’s only the beginning. When loveable old John’s true and awful identity becomes known, a wild batter across the Universe and through centuries ensues. But love triumphs in the end, in the oddest way.

There are his alternative histories, such as A Transatlantic Tunnel, Hurrah where America loses the Revolutionary War, and Geo. Washington’s great grandson now is building a network to connect England to the Colonies. There are the Civil War books, the Eden series, the Wheelworld series, and the Technicolor Time Machine. Books I just loved.

Thank you, Mr. Harrison, for your words over the years.

*: The other author that got me started on SF was Kurt Vonnegut in the short story collection, Welcome to the Monkey House. 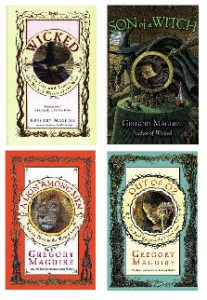 Mention “Wicked” to most people, and they will think of the musical. But “Wicked” is actually the first book in an excellent series (called “The Wicked Year”) written by Gregory Maguire. I just finished reading the series again, and I’d like to recommend it. “The Wicked Years” is really the story of Oz and the Thropp family: Nessarose, Shell, Elphaba, Elphaba’s son Liir, and Elphaba’s granddaughter, Rain. Maguire has taken the foundation created by L. Frank Baum in the first four Oz books, and used that as a framework to tell an excellent political story, interwoven with magic and adventure. This isn’t just Elphaba and Galinda as portrayed in the musical. The musical focuses on the friendship, and this story is much much more. Beginning with Elphaba’s birth, the series looks at Elphaba’s rebellion against the Wizard, and how things as the Wizard cracked down politically against his enemies whilst searching for the Grimmarie, the big book of magic. It is a story of the effect of repressive governments, of theocracies, and of political power abused. It is also the story of how to fight that political power.

The Wicked Years actually consists of four books: Wicked, Son of a Witch, A Lion Among Men, and Out of Oz. Of the four, Out of Oz is my favorite, because by the fourth book, Maguire has become so comfortable with the environment that he can joke a little. There are numerous contempory Oz references, such as to the book Gone With the Wind, the quality of Judy Garland’s singing, as well as good reuse notions introduced by Baum, such as Mombey, General Jinjur, and the Queen of Ev. He makes this all work in an excellent fashion.

I encourage you, if you only know Wicked, to read the entire series. I think you’ll enjoy it and it will move Oz from being a childrens story to a wonderful fantasy universe.

Music: The Producers (2001 Original Broadway Cast) (Matthew Broderick And Ensemble): I Wanna Be A Producer

It’s Friday. Time to clear out the miscellaneous stuff from the links over lunch:

As I mentioned last week, I just finished reading the last book in the Oz quartet by Greg Maguire. This prompted me to reread the first two L. Frank Baum novels in preparation for rereading all four Maguire books. Most people are familiar with the first. Less are familiar with the 2nd book. It has a number of problems.

In the second book, the Emerald City is taken over by General Jinjur. Why? “Because the Emerald City has been ruled by men long enough, for one reason. Moreover, the City glitters with beautiful gems, which might far better be used for rings, bracelets, and necklaces, and there is enough money in the King’s treasury to buy every girl in our Army a dozen new gowns. So we intend to conquer the City and run the government to suit ourselves.”

The invasion is a secret, which is surprise, because according to Jinjur “our army is composed entirely of girls, and it is surely a remarkable thing that our Revolt is not yet discovered.”

The girls only weapons are knitting needles, but they are not worried because “What man would oppose a girl, or dare harm her? And there is not an ugly face in the entire Army.”

So what do they do when they take over the city? Pry the emeralds out of the ground, and stand around and gossip all day while the men cook and clean. (At least Baum notes that the men find the work hard, and wonders how their wives do it all—they must have iron constitutions)

And what happened when Jinjur was overthrown? “At once the men of the Emerald City cast off their aprons. ANd it is said that the women were so tired of eating their husbands cooking that they all hailed the conquest of Jinjur with joy. Certain it is that, rushing one and all to the kitchens of their houses, the good wives prepared so delicious a feast for the weary men that harmony was immediately restored in every family.”

Don’t believe me? Read “The Land of Oz” by L. Frank Baum. I think I prefer Maguire’s reconception of that world. [ETA: Although I note that Maguire’s Oz has its problems as well. Not as much sexist, as there is stronger recognition of matrilineal rularship. Maguire’s Oz has more problems with political abuse of power, and mistreatment of citizens, especially Animals. I’ll also note that neither Oz is actually a democracy, with elected leaders. I’ll have more analysis on both Oz’s after I reread Maguire’s books.]