Yesterday, when I got home and caught up on Facebook, I discovered that some Facebook friends had posted the image below, which was shared from the “National Vaccine Information Center” (an innocuous sounding group, until you visit their website and discover that they are against vaccination). This image, and the discussion that accompanied it, stuck in my craw. Trying to write a cogent response within the Facebook response limitations was difficult, so I decided to let it simmer and write something up over lunch. Here’s the image that prompted everything: 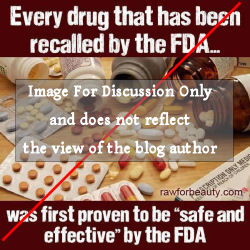 Let’s start by acknowledging that the FDA isn’t perfect. There is clearly a problem with the approval process, because it often takes far too long to get approvals to bring drugs to market, especially when there is urgent need. There are also issues where the FDA does not detect fraudulent data submitted by the drug manufacturers and testers, and let’s drugs through that shouldn’t get through. Both of these are real problems, and both are partially addressed by the same solution: increase the funding to the FDA so that they may, in turn, increase staff to review reports and verify results. Many of the anti-Vac are also anti-government, however, and so they are leery of more government funding to do anything. Sorry, but independent review of drug testing results and protocols fits within the mandate to promote the general welfare, and is a task that must be free of any interference from drug manufacturers. That is a government function.

So let’s talk about the claim in the viral image. How does the FDA prove a drug safe and effective? They go through a multi-year process that involves modeling, animal testing, and eventually, testing in human subjects. The human testing is both for efficacy and to ensure the drug is not harmful. Any reaction identified by the human subjects is noted and goes into the list of potential side effects, just to be on the safe side (translation: there is no guarantee those effects will happen). However, because some conditions are rare and it is difficult to get a suitably sized statistical test pool, and given the wide variation in reactions in humans, problems do get missed. Additionally, testing time is also limited. This is especially true for cumulative side effects that might not be noticed in a 1 year or 2 year test… but only after 25 years of use (which is difficult to test).

So the FDA testing protocol isn’t perfect? What is the alternative? I don’t see the people knocking the FDA coming out and proposing an alternative better protocol. I don’t see them saying we should use drugs without any testing. As for other counties — most other countries don’t have a protocol as strong as the FDA. There are only a handful of countries — Canada, UK, Germany — where I would trust their testing protocols as a viable alternative.

This is all an area of risk mitigation, not 100% risk avoidance. Drug testing does not eliminate the risk, but reduces it substantially. Many things are not risk free, but we accept the risk tradeoff. Taking an airplane — actually, less risk than driving on the street. Have a pool in your home — there’s more risk there than having a gun in the house.  Are there risks with vaccines? Sure, but those risks are very small (and do not include autism — that link has been dis-proven). Anything you put in your body can harm you, from too much water to a single peanut. For the vast vast vast majority, there is no risk with vaccines. On the other hand, the risks of being unvaccinated (as we are currently seeing) are high, for it can expose other people at risk — the elderly, the immune impaired — and has a high likelihood of death for those people.

The summary: Do read and be informed about the drugs you take. Read the inserts with the drugs (which is something the FDA mandates, by the way, and contains information from testing). If you are worried, go to reputable sites to see the incidents of side-effects, and remember that more people are likely to complain when something doesn’t work than will comment when something does work. Talk your fears over with your doctor, but don’t be afraid of science, and despite what you see in the movies, don’t be afraid of government scientists. They actually are working for you and watching out for your best interest (which cannot always be said of corporate science). But in the end, don’t fall for wanting no risk: go for reasonable risk.

ETA: Epilogue: Here’s an interesting article recommended by Mark Evanier: “Rise Of The Know-Betters: Just The Facts About Anti-Vaxx“. It has a good collection of pointers that refute the supposed “facts” stated by the Anti-Vacc movement (I don’t use Vax; Vax is a computer system once manufactured by Digital Equipment, thank you, just as an E Ticket is something that was once used at Disneyland).