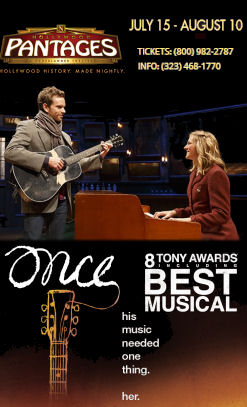 “It’s everything that “Ghost” wasn’t”. This is what I turned and whispered to my wife about 15 minutes into “Once“, the musical we saw yesterday afternoon at the Pantages theatre in Hollywood. Perhaps I should elaborate:

One digression before I go on — please note the graphic I used for “Once” (if you are reading this someplace where you don’t see the links and graphics, go to blog.cahighways.org and read the original). I had to create this one — every graphic you typically see shows the New York original cast with Cristin Milioti and Steve Kazee (FB). The touring cast was so good I wanted you to see their faces, so I had to hunt down an image showing Stuart Ward and Dani de Waal. End digression.

I’ll also note going in that I haven’t seen the movie upon which this production was based. I believe that if you have to see the original movie, there’s something wrong with the stage production. Luckily, “Once” stands well on its own (although I”ll note it is about double the length of the movie). The movie was written (and directed) by John Carney; the “stage play” adaptation (e.g., the book for the stage version) was by Enda Walsh. As for the music and lyrics — they are mostly from the movie, and were written by the two leads of the movie: Glen Hansard (FB) and Markéta Irglová (FB).  Both Hansard and Irglová are accomplished musicians and have written for the screen; neither has written for the stage. This, actually, works to their advantage: the music in “Once” doesn’t sound like your typical musical music. If anything, it reminded me a bit of “Robber Bridgegroom” for its feel and integration. It worked well.

“Once” signals that it is different from the moment you walk into the theatre. Most shows — you go in, you sit down, the lights dim, the overture starts (if you’re lucky enough to be at a show with an overture), and the story begins. With “Once“, when you walk in the theatre, the first thing you see is people on stage. “Once” takes place in a bar in Dublin, and the stage has been turned into a working bar. If you’re over 21, you can go on stage (bring cash), buy a drink (must be consumed on stage), and experience the bar. Slowly the majority of the cast comes out with their instruments (most cast members play multiple instruments) and an Irish folk music jam session begins. The house lights are up, audience is on stage, and here is the cast just having fun with Irish songs like “On Raglan Road.” It would be lovely to have had an album of that jam session; the music was as good as any concert I’ve heard at McCabes. Slowly the audience filters off stage, and the musicians entice one of the guitar players to play his song. He does — a touching song called “Love”. By this point, the house lights are down, except for one illuminating a girl walking down the aisle onto the stage, listening to the music. She’s onstage by the time she finishes… and the story begins.

“Once” tells the story of an unnamed man (“Guy”) and an unnamed women (“Girl”). The story begins as the guy finishes his song, intending to leave his guitar and his music behind in the bar. The girl, an Czech immigrant, was touched by the song. She asks a number of questions, learning he wrote the song for a girl who recently left him to move to New York. The music and the memories are too painful, so he is giving them up and going back to work in his father’s vacuum shop. Suddenly, the girl has a vacuum to be repaired, and offers to pay him with music. Thus begins a quest from the girl to get the guy back with the ex-girlfriend (while the guy is slowly falling in love with the girl). This includes her introducing the guy to her “family”: her mother, her daughter, and some other Czech immigrant musicians sharing a Dublin apartment. She also arranges a 24 hour recording session so the guy can record his music, travel to New York, get a music contract, and win back his ex-girlfriend. This includes arranging a bank loan (with a banker who is also a musician), and getting the guy comfortable on-stage by having him sing at an “open mic” night. This is when you see that guy is falling for girl. Subsequent scenes deepen that realization — that guy is falling for girl, and that slowly, girl is falling for guy. The guy asks the girl to go to New York with him when he goes. She demurs, as her husband is attempting to reconcile. As the story ends, the guy is heading off to New York to see his ex-, who is willing to give it another try; the girl remains in Dublin, but has the gift of a piano from the guy, who bought it with the money his father gave him to get settled in New York. (Note: You can read a longer synopsis on the wikipedia page)

What’s interesting here is the staging: although there are a number of different locations, almost everything takes place in the bar. Tables are moved together, chairs come in an out, but everything else is … imagination. Even most of the other cast members remain on stage when not their characters; they are on the side as the musicians. This is theatre as it should be (and what the recent monologue night at REP reminded us); actors creating the magic with their performance, not electronics or stagecraft. Some interstitial music starts to be played by the actors, people are moving around, and boom — suddenly — you’re somewhere else. The transformation is amazing to watch. Kudos to the director, John Tiffany (FB), for staying true to the simplicity of the story; and to the  “movement” director, Steven Hoggett (FB), for not bringing in traditional dance and choreography. What movement there is seems appropriate — no dance numbers, but rhythmic movements of a folk nature that go with the music. The movement and staging are such that they just seem part of the story, as opposed to stopping the action for a superfluous dance number. As I said, the opposite of “Ghost“.

If I had any criticism of the show, it is that it really doesn’t belong where it is. It works OK in large theatre, but this musical is perfectly suited to the mid-size and small theatres. This would be spectacular at the Colony or Rep East.

The performers are spectacular, which is why I endeavored to find an image showing them. In the lead positions, of course, are “guy” and “girl”. The guy is played by Stuart Ward  (FB, TW) (guitar), who plays beautifully, sings beautifully, and conveys a great depth of emotion in his performance. The girl is played by Dani de Waal (FB, TW) (piano). A wonderful musician with a lovely voice, she gives a delightfully quirky performance with her accent and playfulness. The two are believable together, harmonize well together, and just mesh. I’ll note that Ward has an EP out with about 2/3rds of the touring production; it’s quite good.

Upcoming Theatre and Concerts:  Next weekend brings two shows: “Bye Bye Birdie” at Cabrillo Music Theatre (FB) on 7/26, followed by the annual Operaworks improv show on 7/27. August starts with “Family Planning” at The Colony Theatre (FB) on 8/2. This is followed by “Buyer and Cellar” at the Mark Taper Forum on 8/9, and “Broadway Bound” at the Odyssey on 8/16 (directed by Jason Alexander). The following weekend we’ll be in Escondido, where there are a number of potential productions… including “Two Gentlemen of Verona” at the Old Globe, and “Pageant” at the Cygnet in Old Town. What they have at the Welk (“Oklahoma“), Patio Theatre (“Fiddler on the Roof“), and Moonlight Stage (“My Fair Lady“) are all retreads. August will end with the aforementioned “An Adult Evening of Shel Silverstein” at REP East (FB). I’m just starting to fill out September and October — so far, the plans include “The Great Gatsby” at Repertory East (FB), “What I Learned in Paris” at The Colony Theatre (FB), and “Pippin” at the Pantages (FB). November is also shaping up, with dates held for “Big Fish” at Musical Theatre West (FB), “Handle with Care” at The Colony Theatre (FB), the Nottingham Festival, “Sherlock Holmes and the Suicide Club” at REP East (FB), “Kinky Boots” at the Pantages (FB), and “She Loves Me” at Chance Theatre (FB) in Anaheim. As always, I’m keeping my eyes open for interesting productions mentioned on sites such as Bitter-Lemons, and Musicals in LA, as well as productions I see on Goldstar, LA Stage Tix, Plays411.

One Reply to “Getting It Right, For Once”