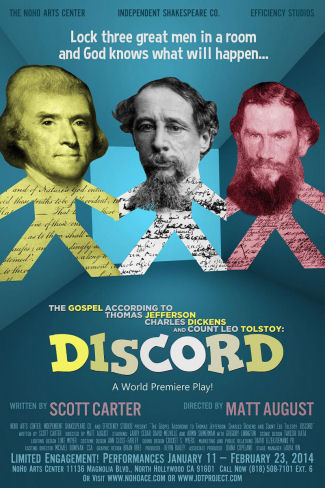 A little over a month ago, I saw an ad* for a show that sounded intriguing: putting Thomas Jefferson, Charles Dickens, and Leo Tolstoy in a room and having them argue about the versions of the Bible they created. It had a very “Meeting of Minds” feel to it… and I love Meeting of Minds. I then read the LA Times review,  and saw the following line: “Imagine the dramaturgical love-child of “Steve Allen’s Meeting of Minds” and Jean-Paul Sartre’s “No Exit.“”. Wow. I just had to see this show. After hunting and hunting for half-price tickets**, I just broke down and bought tickets for the show — the world premier of  “Discord: The Gospel According to Thomas Jefferson, Charles Dickens, and Count Leo Tolstoy” (FB) at the NoHo Arts Center (FB). It was well worth it, and I strongly recommend that everyone see this show.
(*: It was either on Bitter Lemons or in Footlights magazine)
(**: There are no half-price discounts, although there were. There is a discount trick I mention at the end of this writeup)

The conceit of this show is simple, and in many ways is similar to “Meeting of Minds” sans the moderator. You have a locked room with a table, three chairs, and a mirror. Into this room are “tossed” three people — in their perceptions, immediately after their death, and as they were at pivotal points in their lives: President Thomas Jefferson, the writer Charles Dickens, and Count Lev Nikolayevich (Leo) Tolstoy. They cannot get out of the room. Their job: figure out why they are there, and how they get out of this room (which is essentially purgatory).

After some stumbles and starts, they hit upon focusing what they have in common: each was a student of Jesus Christ, and each make their own version of the gospels. They rapidly decide that their task is to reconcile their three versions (if at all possible), and each starts detailing how they viewed the story of Jesus. Dickens‘ gospel sets aside much, but keeps many of the miracles. Jefferson has a more rational, Deistic approach, discarding miracles. Tolstoy focuses on the secret of life, which he boils down as the rejection of violence and hate.  Both Jefferson and Tolstoy reject the God aspects of the story and focus on the story of Christ, the man, and his teachings. Eventually, the realize that they cannot reconcile their believes, and continue to search for other reasons. This forces them to reexamine each of their lives, and to disclose the secrets highlighting their hypocracy and how they weren’t living the Christian life they were purporting to believe.  After this disclosure, they start writing — something (it isn’t specified), and this gets them out of purgatory.

I found the show fascinating and thought provoking — and this was amplified by the talk back afterwards. The notion that I took from the show was that these men believed that Christianity — at least as created by the organized Church — was completely wrong and was a travesty. The story of Jesus was much more meaningful when examined without a God or miracles — a man who preached what he believed in — a man who preached overturning the class order, non-violence, and caring about others — and who was martyred for those beliefs. This is a moving message — and one (if one thinks about it) — that would have resonated with the Rabbis of the day (think about the Pirke Avot), but would have been heresy and dangerous to the ruling classes.  This is theatre that does what theatre is supposed to do: make you think, make you discuss, make you question, and to use a dramatical setting to explore.

“Discord” was written by Scott Carter, who is Bill Maher‘s producer. He’s evidently been working on it for 27 years, and appears to have finally found the right balance between getting out the biographical details of the characters as well as the theological beliefs. In the Meeting of Minds approach, this would be Steve Allen’s job — to goad the characters into telling their stories and to ask the stupid questions to get them to detail their beliefs. Lacking the moderator, the characters are manipulated in such a way that they tell their stories as they go along. This is good — the 85 minutes, one act production just flies along.

The performances in this production are excellent — the cast is Larry Cedar (FB) as Thomas Jefferson, David Melville (FB) as Charles Dickens, and Armin Shimerman (FB) as Leo Tolstoy. All were extremely strong, especially considering the large amount of dialogue that they had to memorize. Cedar’s Jefferson was very statesman-like; my only quibble was that his Virginia accent kept going in and out. Melville’s Dickens kept me thinking of Tim Curry, but was very flamboyant and self-centered. Shimerman’s Tolstoy was perhaps the strongest characterization — he became Tolstoy, with no reflection of the actor underneath. The direction by Matt August  kept the action going and utilized the simple setting well.

Speaking of the setting: The scenic design by Takeshi Kata was pure simplicity: a table with some drawers, three metal chairs, three white walls and the hint of a mirrored window as the 4th wall, and a locked door (my only complaint was that the hinges were on the wrong side). This design was augmented with the excellent lighting of Luke Moyer (FB) and the projection design by Jeffrey Elias Teeter (FB). The lighting made heavy use of LED bars above the three walls to create appropriate color washes; this was combined with normal lighting and spots to highlight and create the mood. The projections were key to the story: they augmented the door and the entries, and they served to title and move along each scene. In many ways, they were the fourth actor. Costume Design was by Ann Closs-Farley (FB), and appeared historically accurate and  correct for each character. The sound design was by the always excellent Cricket S. Myers.(FB). Properties were by Tris Beezley; they must go through a fair number of notebooks and King James Bibles. Laura Rin (FB) was the stage manager.  “Discord” was produced by Kevin Bailey of NoHoACE; Diana Copeland (FB) was the associate producer. “Discord” was a joint presentation of the NoHo Arts Center (FB), the Independent Shakespeare Company (FB), and Efficiency Studios.

After the production (and I’m led to understand this occurs after each performance) there was a talk-back with the author, Scott Carter, religious scholar Reza Aslan, and Armin Shimerman (FB). Each talked about their theological views of the show, and there were questions from the audience. I asked two questions, both of which were misunderstood by Mr. Carter. The first was a hypothetical question of how the end result might have differed had Steve Allen been present — not as a moderator, but as another Gospel author (Allen has written a number of books on the bible). The intent was to see whether a stronger rationalist might have led to some different conclusions, but Mr. Carter took it as a suggestion to change the current script (which it wasn’t). The second question was along a more Jewish line, wondering what conclusions might have been drawn from a J-E-D-P Old Testament discussion — basically could the multiple authorship theory of the Old Testament lead to the ability to remove God and miracles from there as well, and reconcile rationality and morals with belief. Again, he took the question as a suggestion on the script, which it wasn’t. Ah well.

I strongly recommend that everyone go see “Discord” if you can fit it into your schedule before it closes. Tickets are available through the JDT Project. Half price tickets are not available, although if you are a supporter of the Independent Shakespeare Company (FB), their website or FB page provides information on how to get a $10 discount per ticket (note that seniors are defined as 60+). ISC is well worth supporting — they are the folks that put on the free Shakespeare in Griffith Park each summer.

Upcoming Theatre and Concerts:  Next weekend (February 8) brings “Forever Plaid” at Cabrillo Music Theatre (FB). The following weekend (February 16) brings Lysistrata Jones at The Chance Theatre (FB) in Anaheim. The next weekend, February 22, is currently open. I may be needing to do a site visit to Portland OR for ACSAC; if not, I’m keeping my eyes open for “On The Money” at the Victory Theatre Center (FB) or “My Name is Asher Lev” at the Fountain Theatre (FB) (as this runs through April 19, this might be good for mid-March or April), or something else that hasn’t caught my attention yet. The last day of February sees us in Studio City at Two Roads Theatre for Tom Stoppard’s “The Real Thing“, followed the next evening by the MRJ Regional Man of the Year dinner at Temple Beth Hillel. March theatre starts with “Sex and Education” at The Colony Theatre (FB) on March 8.  (this might be good for March 16); The weekend of March 16 brings Purim Schpiels, with Sunday afternoon bringing “Inherit the Wind” at the Grove Theatre Center (FB) in Burbank. March 22 is being held for “Harmony” at The Ahmanson Theatre (FB). March concludes with “Biloxi Blues” at REP East (FB) on March 29. April will start with “In The Heights” at Cabrillo Music Theatre (FB) on April 5, and should also bring “Tallest Tree” at the Mark Taper Forum, as well as the Southern California Renaissance Faire. As always, I’m keeping my eyes open for interesting productions mentioned on sites such as Bitter-Lemons, Musicals in LA and LA Stage Times, as well as productions I see on Goldstar, LA Stage Tix, Plays411.