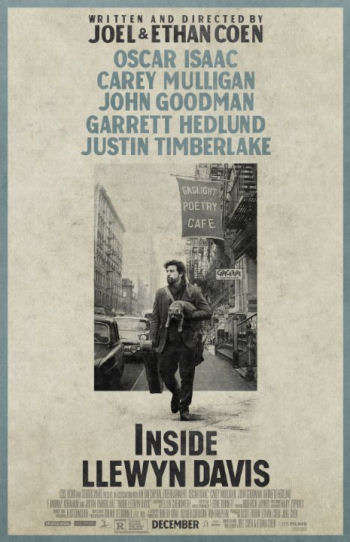 Those who know me know that I love folk music of the 1960s. I started out as a Peter, Paul, and Mary afficianado, and then moved to the Kingston Trio, the Limeliters, the Weavers, Joan Baez, the Chad Mitchell Trio, and of course Tom Paxton. So when Tom, at his last concert, mentioned that one of his songs was being used in an upcoming movie… and recommended that movie.. suddenly “Inside Llewyn Davis” was on my radar.  So today saw me at my second movie in a week, together with my uncle Tom (who knows folk music well), learning about Llewyn Davis.

“Inside Llewyn Davis” is the Coen Brother’s touching tribute to the pre-Dylan scene in Greenwich Village in New York, when venues such as the Gaslight introduced (or reintroduced) new and upcoming folk music acts such as those I named above, along with folk like Pete Seeger, the Clancy Brothers, Jean Ritchie, Mississippi John Hurt. It was a time of artistic creation, a time when folk music — and places like the Gaslight and the Hungry i in San Francisco, were shaping music. The story of Llewyn Davis is based roughly on the story of Dave Van Ronk, a folk musician of that time, although many things were changed. There are hints in the various acts of other folk groups, but none are explicitly names.

So let’s talk about the movie and what works… and what doesn’t. What works is the music… mostly. The selection of folk music on the soundtrack is great to listen to. Nice performances, nice voices, and some good selections. There are a few problems. The one I noticed was anachronistic — they included songs such as Tom Paxton’s “The Last Thing On My Mind” that were written in 1962-1963… on performances that were supposedly in 1961 by someone other than the author. My uncle noted that it gave a very somber and downbeat image of folk music — much of the music was much more energetic and bluegrassy than what was portrayed. Again, look at the initial albums of Peter Paul and Mary, the Kingston Trio, the Weavers, or Tom Paxton for an idea of that energy. That energy wasn’t in the soundtrack song selection.

Another thing that works well are the performances. Oscar Davis is very strong as Llewyn — both performance-wise and singing-wise. The supporting actors are all very strong, in particular Max Casella, Ethan Phillips, and surprisingly, Justin Timberlake. John Goodman has an interesting role, although I think he is both literally and figuratively wasted in the movie. Yes, his performance is great… but if he wasn’t there, how would it change Llewyn’s trajectory through the story?

What doesn’t work is the story. To be blunt: it is boring and there is no character growth. We start with a scene where Llewyn is beat up for criticizing another performer at the Gaslight. We then move back in time to the week before, and observe a week in the life of Llewyn. We see him trying to get work in the folk music field… and failing. We see him homeless and sponging off of peoples couches. We see him interacting unsuccessfully with people. We see him carrying a cat around. What we never see is Llewyn learning anything about himself, or how to be successful in his field. We see others passing him by, moving onward and upward while he sabotages himself. At the end, we even see Dylan at the Gaslight, again upstaging Llewyn (as Dylan did to Van Ronk in real life). Llewyn never wins, and this makes the audience walk out wondering why they sat through this story. As someone somewhere else said about this movie: The journey of the cat is more interesting than Llewyn’s journey.

I’ve read other reviews praising this film and its artistry. That artistry is there: it is shot beautifully, it evokes great images, it establishes a mood. But… but… it’s ultimately all shadows and mood. You get to watch someone fail. You get to see someone ping-pong through life, never quite making the hole. Playwrights have long learned that the story is critical, and they have dramaturgs there to hone the story and make sure it tells what it is supposed to tell. What we were supposed to see from this story — well, I couldn’t figure it out. It was a beautiful movie, but it also didn’t touch my soul or affect me as it could have done had it been honed a little better. I wanted so much more here — to see why folk music succeeded, to see perhaps how Llewyn might not have been successful, but he might have been that catalyst for others. But it wasn’t there. Llewyn was a true anti-hero, and he just couldn’t succeed.

The artists behind this movie did a wonderful job of getting the atmosphere of the Gaslight and Greenwich Village correct; of establishing the feel of New York; of establishing what the early folk scene was like. What they didn’t capture was the energy. Tom Paxton talks in his concerts about playing the Gaslight, and then keeping the music going with folks like the Clancy Brothers at the local bars until the wee hours of the ‘morn. That energy is missing here.

If you like folk music, and have an interest in how the 1960s folk revival began, “Inside Llewyn Davis” may be worth seeing. If you are looking for an engaging story line that has characters you care about, then think twice. If you like the music, I suggest just getting the sound track… or even better, getting the excellent Smithsonian Archive’s album of Dave Van Ronk.

Previews: Of course, what is a movie without previews. Here’s what was previewed and my thoughts:

[Ob. Disclaimer: I am not a trained critic; I am, however, a regular audience. I’ve been attending live theatre in Los Angeles since 1972; I’ve been writing up my thoughts on theatre (and the shows I see) since 2004. I do not have theatre training (I’m a computer security specialist), but have learned a lot about theatre over my many years of attending theatre and talking to talented professionals. I pay for all my tickets unless otherwise noted. I believe in telling you about the shows I see to help you form your opinion; it is up to you to determine the weight you give my writeups.]

And with that, the 2013 year of entertainment comes to a close. We probably saw one live theatre performance a week, on average, plus two to three movies. There were also some concerts along the way. It was a fun year, and you can read about it all by just following the review-2013 tag. Hopefully, 2014 will be just as fun. Entertainment — preferably live, but even filmed — enriches the soul and doesn’t clutter the house. Go to the theatre, or the theater, if you must, today.

Upcoming Theatre and Concerts:  Our first ticketed performance in January 2014 is a concert performance of MooNie and Broon (FB) at The Colony Theatre (FB) on January 11. The first scheduled theatre is on January 18: “Mom’s Gift” at The Group Rep at the Lonny Chapman Theatre (FB) in North Hollywood. The following weekend, January 25, brings the first show of the REP East (FB) 10th season: “I Love You, You’re Perfect, Now Change“ (which we last saw at REP in 2006). February 1 may also bring “Vanya and Sonya and Masha and Spike” at the Mark Taper Forum, depending on Hottix availability (alternate dates are 2/2 and 2/9). February 8 will bring “Forever Plaid” at Cabrillo Music Theatre (FB). The following weekend, February 15, is being held for Lysistrata Jones at The Chance Theatre (FB) in Anaheim. The last weekend of February, February 22, is currently being held for Sutton Foster at the Broad Stage (FB) in Santa Monica (if I can find discount tickets). March brings “Sex and Education” at The Colony Theatre (FB) on March 8, and “Biloxi Blues” at REP East (FB) on March 29. It may also bring “Harmony” at The Ahmanson Theatre (FB) on March 22. The end of the month (actually April 5) bring “In The Heights” at Cabrillo Music Theatre (FB). As always, I’m keeping my eyes open for interesting productions mentioned on sites such as Bitter-Lemons, Musicals in LA and LA Stage Times, as well as productions I see on Goldstar, LA Stage Tix, Plays411.

3 Replies to “The Times, They Were A Changin’”