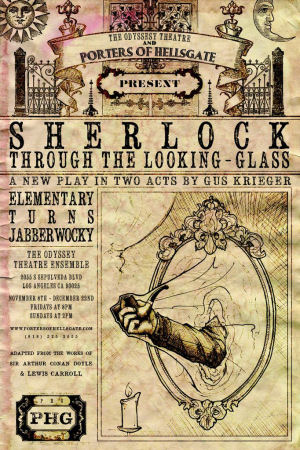 A few weeks ago, I was looking at listings of upcoming theatre in Los Angeles when I saw a mention of a show with an interesting premise: What if you took Sherlock Holmes, whose world is based in logic, and place him in a world where logic doesn’t work? This premise sounded so interesting that I went and book tickets for the show, the Porters of Hellgate (FB) presentation of “Sherlock Through the Looking Glass” by Gus Krieger (FB). The show wasn’t quite what I expected, but it was very good in its own way.

First, let me get my expectations out of the way. What I expected was a mystery that took place in an Alice-In-Wonderland world, where Sherlock Holmes would have to figure out how to use non-logic to solve the crime. Although that was present a little in this story, it wasn’t the whole story… and in that I was disappointed. A full story like that could be quite interesting.

So what was the story we got? Sherlock Holmes and Dr. Watson are bored — their last case was a while ago, and there hasn’t been anything interesting happening. In comes Lillian Childress, who paints a story about an incident that took place at a London marketplace. She was there with her sister, Josephine, looking at the wares. She was looking at books, while her sister was looking at fruit and other wares. After purchasing a copy of the Alice books and showing them to her sister, her sister exhibits signs of madness… and the police take her away to Bedlam. This is the third such case of madness in the last month, and the police suspect Lillian to be culprit. She goes to Holmes to prove her innocence. Tracking down the case leads to the prime suspect, Charles Dogson (better known as  Lewis Carroll, the author of the Alice books). While he goes off to jail, Holmes continues to investigate beliving Dogson to be innocent as well. The continued investigation result in Holmes falling into the madness as well. Can Holmes work his way out of the Alice-In-Wonderland based delusions and find the real culprit? This is the heart of the play.

This play, essentially, mashes the world of Holmes with the world of Alice, with a little of the historical world of Charles Dogson thrown in. I’m not an expert on Holmes, but the characterizations here seemed to fit with the characterizations I’ve seen in other stage and screen portrayal of both Mr. Holmes and Dr. Watson. There wasn’t an overindulgence on stereotypes, but sufficient logic and deduction to establish the characters quite well. In the second act, there was descent into the madness of Alice’s world, with Holmes roughly in the position of Alice. Again, this worked reasonably well — quoting some of the best known portions of the Carroll books and presenting the best known characters, but not falling into the Disney stereotypes of the characters. Lastly, the other characters surrounding Holmes in London worked reasonably well to establish their characters and purposes.

In short, the story was a fun one, if not a bit wordy at times (making it initially a bit hard to follow). Of course, one expects a little wordiness with Holmes. I liked the story and its resolution, and the way the story work seemed consistent overall with Sherlock Holmes. In truth, given Holmes’ addictions and OCD, he wasn’t that far from madness to begin with.

The performances were very strong. In the lead position was Kevin Stidham (FB) as Sherlock Holmes. Stidham was able to draw from his UK background to get the accent right, and looked a bit like you expect Holmes to look (or perhaps a little young). He did well with the voluminous dialog, only having one or two line hesitations. He worked well with his Dr. Watson, Timothy Portnoy (FB). Portnoy’s Watson handled the supporting role well, and was surprisingly physical in the fight scenes (although the pulling of punches was a bit obvious). The two together were fun to watch. Lastly, as the lead protagonist Lillian Childress (as well as the Red Queen), Jennifer Bronstein (FB) worked well to move the story along, and was believable as the concerned sister.

The play was directed by Gus Krieger (FB), who used a very simple set design for the production (no set designer is credited). The sound design, which disappeared as a good sound design should do, was by Nick Neidorf (FB). The lighting design was by Sterling Hall (FB), and worked reasonably well (although more modern LED lights or movers would have made the color changes during the madness sequences stronger, but budgets are budgets). More impressive was the costume design by Jessica Pasternak (FB), who created effective costumes that evoked the era. Even more impressive were the Alice-themed masks created by Amelia Gotham (FB) that were used during the madness scenes. Choreography was by Louise Gassman (FB), and the fighting sequences were choreographed by Charles Pasternak (FB). Stage management was by Sarah Buto (FB), and Jessica Pasternak (FB) was the house manager. The production was produced by the Porters of Hellgate (FB) and the Odyssey Theatre Ensemble (FB).

This was our first Porters of Hellgate (FB) production. They look to be a company that focuses on the classics, and have as a company goal the production of every one of Shakespeare’s plays. They’ve done 17; they have 18 to go (counting all the parts of the Henry n as a single play). It will be interesting to watch them for the future.

“Sherlock Through The Looking Glass” continues at the Odyssey Theatre Ensemble (FB) through December 22. Tickets are available through the Porters of Hellgate website and Vendini,  and may be available through Goldstar and LA Stage Tix. If you like Sherlock Holmes or Alice in Wonderland, it is worth seeing.

Upcoming Theatre and Concerts:  December, as currently scheduled for theatre, concludes with “Peter and the Starcatcher” at The Ahmanson Theatre (FB). Of course, there will be the traditional movie and Chinese Food on Christmas Day — right now, the two movie possibilities are “Saving Mr. Banks” opening December 13 (meaning we can use group discount tickets), or “The Secret Life of Walter Mitty” opening December 25. I’m also interested in “Inside Llewyn Davis” for both its soundtrack and its story (based off the live of Dave Van Ronk). None of the other December releases look worth the money (I’d rather see “August: Osage County” on the stage, thankyouverymuch). Looking into January: The first scheduled show is on January 18: “Mom’s Gift” at The Group Rep at the Lonny Chapman Theatre (FB) in North Hollywood. The following weekend, January 25, brings the first show of the REP East (FB) 10th season: “I Love You, You’re Perfect, Now Change“ (which we last saw at REP in 2006). February 8 will bring “Forever Plaid” at Cabrillo Music Theatre (FB). The following weekend, February 15, is being held for Lysistrata Jones at The Chance Theatre (FB) in Anaheim. The last weekend of February, February 22, is currently being held for Sutton Foster at the Broad Stage (FB) in Santa Monica (if I can find discount tickets). March brings “Sex and Education” at The Colony Theatre (FB) on March 8, and “Biloxi Blues” at REP East (FB) on March 29. It may also bring “Harmony” at The Ahmanson Theatre (FB) on March 22. The end of the month (actually April 5) bring “In The Heights” at Cabrillo Music Theatre (FB). As always, I’m keeping my eyes open for interesting productions mentioned on sites such as Bitter-Lemons, Musicals in LA and LA Stage Times, as well as productions I see on Goldstar, LA Stage Tix, Plays411.

One Reply to “Elementary, My Dear Alice”