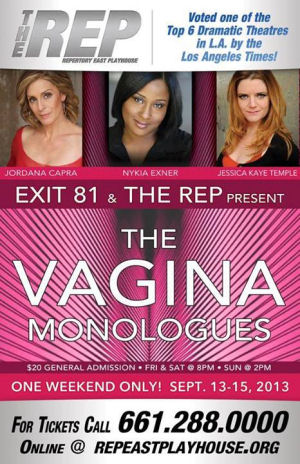 Vagina. Va-jay-jay. Naughty Bits. Down There. Pussycat. Itsy-Bitsy. Downtown Dining and Entertainment District. Yup. There I was, this afternoon, with 5 other men, surrounded by 75 vaginas, watching a play about vaginas. I felt outnumbered.

You would think, with all the thinking men do about vaginas, that more of us would want to learn about them, to study them in detail, to understand what makes them tick… what makes them happy. But no, the numbers were 75… to 6. Last night, there were 5. Friday night, 3. It seems as much as men want to play with vaginas, they don’t want to think too much about them.

That’s too bad, for the play, “The Vagina Monologues” (by Eve Ensler) isn’t just for women. The Vagina Monologues consists of a series of monologues and other snippets of women talking about their vaginas. Discussions include (thanks to Wikipedia for providing the names): My Vagina Was My Village, a monologue developed from the rape experiences of Bosnian women;  My Angry Vagina, a rant about the injustices today’s world imposes on vaginas; The Little Coochie Snorcher That Could, in which a woman recalls traumatic childhood sexual experiences; I Was Twelve, My Mother Slapped Me, a monologue about menstruation; Reclaiming Cunt, a monologue about the word; The Woman Who Loved to Make Vaginas Happy, a monologue about a sex worker to women; Because He Liked to Look At It, a monologue about how a woman discovered the beauty of her vagina through how a man saw it; I Was There In The Room, a monologue about birth; another monologue about naming body parts and the term vulva; and another about hair. There were snippets about how many women never really look at their vaginas, and how for some it is often a foreign land. Not all available monologues were chosen for this performance — evidently, there is one that describes the experience of women in Iraq and Afghanistan that we didn’t hear. However, this was the current version, as there were topical references (such as trans-vaginal probes).

Being a man, I naturally cannot understand a lot of the relationships and experiences in this piece. I’m not sure men have the same relationship with their little brains. I’m not sure I could imagine men going to a show called “The Penis Monologues”. Hell, even if they retitled it “Dickhead”, I’m not sure they would go. I’m sure men would relate to the questions the monologues asked women about their vaginas: What would your vagina say? What would your vagina wear? What would it smell like? I could imagine men answering that question about their penises. Well, maybe not the last one.

Still, from my point of view, I found this play instructive and insightful. I learned about some aspects of the relationship between women and their genitals that I had never thought about. Alas, there were no pictures :-). Seriously, what I found most interesting was the audience reaction. It was interesting to see where they laughed, when people made verbal acknowledgements of agreement. I don’t know if it was the afternoon crowd, or the generous wine O was pouring, but these women were wild. Something about this show touched a nerve with the women in the audience. There were cheers throughout, and you could sense the strong agreement with the statements made and the sentiments expressed. Further, the actors didn’t just ignore it — they reacted and played with it, amplifying the feelings in the room. This wasn’t just a performance; it was an experience.

The monologues were performed by three strong actors: Jordana Capra (FB), Nykia Exner, and Jessica Kaye Temple (FB). As these were monologues, the performances were on book. Still, the actors did a great job of adding personality and flair to each monologue. What I found even more fun, however, was watching the actors that were not performing the monologues. They were so into the moment — reacting naturally to what was said, expressing emotions, feelings, and joy. It was just great. I don’t know if those were performances coached by the director, or natural reactions from the women to the monologues, but I made the play for me. It was part of what made this a special experience.

The production was directed by Jordana Capra (FB), who was also one of the monologuists. Lighting was designed by the newly-married Tim Christianson/FB. Sound was by Steven “Nanook” Burkholder/FB. Marie-Claire Erdynast/FB was the stage manager.  “The Vagina Monologues” was produced by Jordana Capra (FB), Ovington Michael Owston/FB, and the sleep-deprived Mikee Schwinn/FB (who is a new daddy).

This afternoon was the last performance of “The Vagina Monologues” at REP East. The next production at REP East (FB) is “God of Carnage“, running September 20 through October 18, 2013. Tickets are available through the REP Online Box Office, as well as through Goldstar.

Upcoming Theatre and Concerts:  I told you our schedule would fill up quickly. Next weekend sees us in Santa Clarita for the Exit 81 production of “The Vagina Monologues” on September 15th at REP East (FB). The fourth weekend in September brings two shows: “bare – A Rock Musical” (FB) at the Hayworth in the Westlake Disttrict on Saturday, and “Carrie That Tune” (great songs from flop musicals) at the Avery Schreiber Playhouse (FB) in North Hollywood on Sunday.  We close September by returning to Santa Clarita and REP East (FB) for “God of Carnage” (September 28). Theatre in October starts on the 5th with “Breath and Imagination” at the Colony Theatre (FB).  The second week of October sees me at the West Coast Premier of “Burnt Street Boys“ at the Third Street Theatre (FB).  The third week of October is being held for the production of “Carrie – The Musical” (FB) by Transfer Theatre, but tickets are not yet on sale. October ends with the Cabrillo Music Theatre (FB) production of “Kiss Me Kate” (October 26). November will start (hopefully) with “Dirty Rotten Scoundrels” at Actors Rep of Simi (FB). That will be followed by a visit with Thomas the Tank Engine when we volunteer at OERM over Veterans Day.  The third week will be theatre-ish, as we attend ARTS’s Nottingham Village (FB) (a one-weekend ren-faire-ish market — tickets are now on sale). One of those weekends we’re also likely to see a Trollplayers (FB) production of Steven Schwartz’s “Children of Eden” (which runs November 8-17) [Trollplayers is the community theatre group at Our Lady of Lourdes Church in Northridge]. November will conclude with “Play It Again Sam” at REP East (FB) at the end of the month (November 23), and “Miracle on S. Division Street” at the Colony Theatre (FB).  December is mostly open, but should bring “The Little Mermaid” at Nobel Middle School, and “Peter and the Starcatcher” at The Ahmanson Theatre. As always, I’m keeping my eyes open for interesting productions mentioned on sites such as Bitter-Lemons, Musicals in LA and LA Stage Times, as well as productions I see on Goldstar, LA Stage Tix, Plays411.