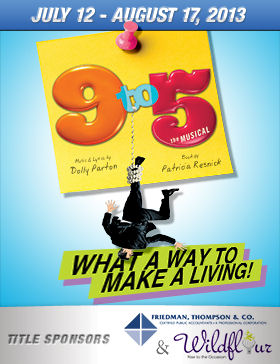 Back when I was in college, I saw a amusing movie starring Dolly Parton called “9 to 5“. Back in 2008, I saw “9 to 5” again — this time as a full-on, Broadway-bound musical at the Ahmanson. Five years later, I’m seeing “9 to 5” for a third time — this time in a creative production by our favorite under-81 seat playhouse in Newhall. The first had the story in the context of the time; the second had the razzle dazzle flash of Broadway; and the third stripped that back to show the musical for what it was. In this case, it showed it as a story bound in the 1970s, but with some powerhouse performances that overcame the story limitations.

One advantage of having seen the show before is that I don’t have to rewrite the synopsis — I can cut and paste. So, all together now, Control-C, Control-V:

For those unfamiliar with the movie, 9 to 5 tells the story of a mid-1970s office that produces, well, we’re never told quite what. There is the typical 1970s male chauvinist sexist pig boss, Franklin Hart (Dabney Coleman in the movie), who makes life a living hell for his buxom country assistant, Doralee Rhodes (played by Dolly Parton in the movie), his efficient head secretary Violet Newstead (Lily Tomlin in the movie), and the new hire, Judy Bernly (Jane Fonda in the movie). Fed up, one night they smoke pot and fantasize about how they would do him in. The next day, they almost mistakenly do it. While attempting to clean up the mess, they kidnap him and hold him prisoner in his house. They then take over running the company in his stead, improving efficiency… until he escapes. In the end, good defeats bad, and everyone gets what they deserve.

The musical version simply expands upon the bones created by the movie. This isn’t a surprise, as it features a book by Patricia Resnick, author of the original screenplay, and music and lyrics by Dolly Parton. The musical book hones very closely to the original screenplay, keeping almost all of the major movie incidents intact (including the fantasy sequences). It does provide some additional expansion on the home lives of Doralee, Judy, and Violet. The music includes the well-known theme song together with newer songs by Parton (which do have the distinctive Parton voice).

When we saw the show at the Ahmanson, it was on its way to Broadway. This meant, as I said above, that there was lots of razzle and dazzle. It was a technical marvel, with a full-size LCD backstage providing projection, multiple hydraulic elements moving major pieces up and down, numerous flying units (including Franklin Hart!), and loads of moving lights and scrims. That can’t be done in an 81-seat black box. What we got instead was creativity. The set featured a large turntable (I couldn’t tell if it was human or motor powered) that allowed alternation between the executive office set and the bedroom. There were a number of roll-able desk units that could be placed in front of this, together with couches and benches. The cast didn’t have a large backing ensemble. The costumes did a great job of reminding one of the 1970s, and at points were quite funny. This was particularly true in the aforementioned fantasy sequences, which featured a large number of Disney-esque costumes and quick costume changes. These forms of creativity are one thing I really enjoy about under-99 seat intimate theatre. It is why the recent Man of No Importance worked well, and why so many big Broadway flops work so much better at the intimate level. Razzle and dazzle does not a show make — it is performance.

Was the show perfect? No. There were a few things I found, for lack of a better word, “cheesy”. The first was the voice-overs by Dolly Parton at the beginning and end. I understand these were probably required by the licensing contract, but I hope in the future they can be replaced by an actor actually saying the lines (most likely, the actor playing Doralee). As it is now, the voice-overs bring it too much Dolly and do not let the show stand on its own. The other cheesy thing was the mustaches on a few of the actors.  They looked a bit like ’70s porn mustaches. Then again, this was a ’70s office. Maybe they were moonlighting 🙂 In any case, that’s not a major problem.

There were, however, four things that elevated this production to spectacular: the three lead actresses and the main supporting actress. The voices and performances of these three were spectacular, and not to be missed. My favorite was Sarah Krieg (FB) as Judy Bernly (the role originated by Jane Fonda in the movie and Stephanie J. Block on Broadway) . Unlike Jane and Stephanie, who were skinny mousey types, Sarah (who we recently saw as Rona in Spelling Bee) was a plus size powerhouse. This is a different look for Judy, but it worked quite well. Sarah has a remarkable singing and performance presence, which was powerfully shown during a number of numbers — in particular, “Get Out and Stay Out” and “The Dance of Death”. Equally strong was Erin Rivlin (FB) as Violet Newstead (the role originated by Lily Tomlin in the movie, and Allison Janney on Broadway). Erin also brought a different look to the role, but one that I liked. A powerful performer, Erin went beyond Janney to have a powerful singing voice as well (we’ve seen her do this at REP before, most recently in Trailer Park Musical). Erin was just delightful in “Potion Notion”, “Around Here”, and “Change It”. In the third lead position (which was more of a primary lead in the movie) was Gin Treadwell-Eng/FB as Doralee Rhodes (the role originated by Dolly Parton in the movie and Megan Hilty on Broadway). Gin moved the role away a bit from a Dolly-clone, as she couldn’t quite duplicate Dolly’s ummm, proportions. But Gin kept the country, and more importantly, had a strong country performance voice that made her performance a delight to watch. Spectacular numbers from Gin included “Shine Like the Sun”, “Cowgirls Revenge”, and “Backwoods Barbie”. Lastly, the surprising supporting performance came from Sarah Lang/FB. Knowing the character, one would think the performance was simply comic relief. But Sarah blew away the house with her performance in “Heart to Hart” — it was nerd-girl sexy and just… wow. From how the actress looked, you would never have expected that big voice to be in her.

The four women just discussed were the performances that grabbed and shook you. A number of other performance were also worthy of some specific mention. As Franklin Hart Jr., Billy Davis/FB gave a good portrayal of the lying, cheating, sexist, male pig. Also strong was K. C. Lindley/FB as Joe, the love interest for Violet. Lastly, as Margaret, Jane Arnett (FB) was so convincingly soused I was thinking we would need to call her a cab to get home; I didn’t want to see her tab at the Hydeaway Lounge! Rounding out the cast were Julie Berlin/FB (Kathy), Curtis Crawford/FB (Intern), Jim Crawford/FB (Dwayne), George D. Cummings/FB (Dick/Doctor/Tinsworthy), Liam Johnson (Josh), Donna Marie Sergi (FB) (Maria), Melissa Strauss (FB) (Missy), Beth Sweezer (Candy Striper), and Don Sweezer/FB (Bob Enright). I’ll also note that this was (a) one of the largest casts I’ve seen at REP in a while, and (b) there were a lot more CTG actors than we usually see at a REP show.

The production was directed by Leslie Berra/FB, a past Goldie award winner at CTG (which likely explains (b) above).  Leslie did a great job of making what is a massive production work in intimate quarters. She also, it appears, did it while keeping the fun in the show, for the actors seemed to be having a delightful time. She was assisted by Nancy Alterman (FB) as Choreographer, who came up with some very creative dance moves for the limited space.

At this point, I would normally credit the musicians. Alas, REP had to use pre-recorded music. I harbor a secret hope that one day REP can move to non-recorded musicians, but they just don’t have the space. Perhaps one day they can do a musical that has the musicians on the stage. Pump Boys and Dinettes? The Robber Bridgegroom? Golden Boy of the Blue Ridge? A Mulholland Christmas Carol?

Turning now to the technical. The clever and inventive set was designed by Jeff Hyde, Madi Orgill/FB (who also did the scenic design and paiting), and Mikee Schwinn/FB. Lighting was designed by the newly-married Tim Christianson/FB (Mazel Tov, Tim!). Sound was by Steven “Nanook” Burkholder/FB. The great costumes (especially in the fantasy sequences) were designed by Janet McAnany/FB. The resident stage manager is Christina Aguilar/FB. Amanda Grace Williams/FB was the production stage manager, assisted by Taylor Kozlowski/FB. As always, it is always fun to see the stage management and stage hands dancing in the hall just before the start of Act 2 :-). The show was produced by Mikee Schwinn/FB and Ovington Michael Owston/FB.

“9 to 5 – The Musical” continues at Repertory East Playhouse through August 17th. Tickets are available through the REP Online Box Office or through Goldstar. The show is well worth seeing. REP has also announced two one-weekend shows: “Wake Up and Smell The Coffee” by Eric Bogosian on August 29-31, and The Vagina Monologues” by Eve Ensler on September 13-15.

REP has also provided a preliminary announcement of their 2014 season — their 10th anniversary. No dates as yet. The shows selected are: “I Love You, You’re Perfect, Now Change“, “Biloxi Blues” (Neil Simon), “Cat on a Hot Tin Roof“, “Return to Forbidden Planet“, “The Great Gatsby“, and “A  Few Good Men“.

Upcoming Theatre and Concerts:  Next weekend is open for my wife’s birthday [ETA: I’ll be doing the So Cal Games Day on Saturday, and we’re going to the Renegrade Craft Faire for Karen’s Bday on Sunday].  The end of July brings “Legally Blonde – The Musical” at Cabrillo Music Theatre (FB) and   OperaWorks at CSUN (FB) on Sunday (now ticketed). August starts with Nine at DOMA Theatre Ensemble (FB). It may also bring “Why Do Fools Fall in Love?”  at the Santa Clarita Regional Theatre — this is a new Roger Bean show that sounds interesting [ETA: On the other hand, there is “The Apple Tree” at ELATE/Lincoln Stegman]. Otherwise, August is currently completely open due to vacation planning, although we may see a show at the Lawrence Welk Resort in Escondido at the end of the month (depending on price), or at another venue in San Diego. September may bring Sarah Ruhl’s “In The Next Room or The Vibrator Play“ at the Production Company/Secret Rose (FB) and “Blue Man Group” at the Hollywood Bowl. The middle of the month may bring “The Vagina Monologues” at REP East (FB), and the end definitely sees us back at REP East (FB) for “God of Carnage” (September 28). October 5th brings “Breath and Imagination” at the Colony Theatre (FB), as well as the Cabrillo Music Theatre (FB) production of “Kiss Me Kate” at the end of the month (October 26). November will start (hopefully) with “Dirty Rotten Scoundrels” at Actors Rep of Simi (FB), as well as ARTS’s Nottingham Village (FB) (a one-weekend ren-faire-ish market — tickets are now on sale). November will conclude with “Play It Again Sam” at REP East (FB) at the end of the month (November 23), and “Miracle on S. Division Street” at the Colony Theatre (FB).  The fall should also bring a production of “Carrie – The Musical” (FB) by Transfer Theatre, but the specific dates have not been announced. As always, I’m keeping my eyes open as the various theatres start making their 2013/2014 season announcements. Lastly, what few dates we do have open may be filled by productions I see on Goldstar, LA Stage Tix, Plays411, or discussed in the various LA Stage Blogs I read (I particularly recommend Musicals in LA and LA Stage Times).