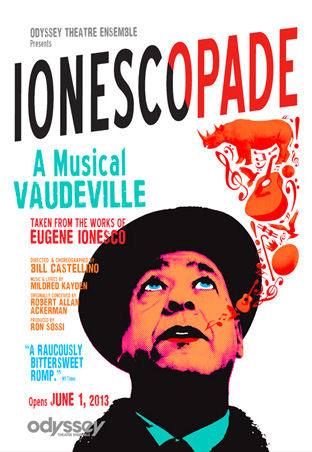 Life is absurd. You might as well accept the fact and enjoy the humor of life. This seems to be the point of the musical we saw last night at The Odyssey Theatre Group in West Los Angeles: “Ionescopade: A Musical Vaudeville“. Ionescopade is different than most musicals we have seen — there really is no through story (although there is a book); yet the disparate parts combine to give an overall through-line and message, if one is aware enough to see it. It is not for everyone; a number of audience members left during intermission. But for those who stick it out, you’ll have a thoroughly enjoyable evening — even if it is slightly strange. [Note: Musicals in LA posted an album on Facebook with images from the show. As it is public, throughout this post I’ll be linking to it. I encourage you to look at the images.]

Ionescopade is a musical that lives up to its subtitle: A Musical Vaudeville. The two-hour musical (with intermission) is a series of individual musical skits, connected only by a non-speaking character referred to only in the initial skit as “The Writer” (Alan Arlow). This character brings props and such on-stage and interacts with the remainder of the troup, yet remains apart from the rest of the actors. In a number of ways, “The Writer” is both a comic and an observer of the absurdity of the action (image).

All of the skits are drawn from the works of Eugene Ionesco, who is perhaps the father of absurdist theatre. Ionesco write a number of absurdist plays that are still produced, such as Rhinocerous. Ionesco dealt with the realities of facism, decay, corruption, and disgust for the tangible by retreating into the absurd. Perhaps this is best captured from the Rhinocerous quote in the program: “There are many sides to reality. Choose the one that’s best for you.” To construct Ionesopade, Robert Allan Ackerman (original concept) and Mildren Kayden (music and lyrics) drew upon Ionesco scenes, short plays, journal passages, conversations, and characters across all of Ionesco’s works. These were assembled into skits developed for a group of 6 actors and augmented with songs. Each skit is humourous in its absurdity, with points of laugh-out-loud funny and others of amazement. As you can guess, it is hard to describe.

Here are some examples. The Cooking Lesson (image) has Joey D’Auria and Alan Abelew  teaching how to cook a hard-boiled egg. There are lots of sight gags and simple sleight-of-hand magic, and the piece is simply enjoyable. The Leader has a number of characters worshipping their leader, and excited about seeing their leader. When the leader is finally seen, the leader is a puppet with no head. One character makes a remark along the lines that many popular leaders are headless. There’s a similar point being made about the absurdity of government in The Peace Conference (image) where the characters are simply arguing with each other without making any point at all.  Perhaps this is because they would rather talk at each other than listen. Sound familiar?

There’s also a chilling monologue in The Killer, where you wonder where the real insanity lies.

There are other skits that are just absurd, such as the one involving vaudeville Bobby Watson and family (all named Bobby Watson) (image), the one involving Mother Peep and her chicks, or the Wipe-out Games (where everyone seems to die).  There’s also a great musical number in Everyone is Like Me, where nothing is as it seems to be.

In short, the production is absurd. The director (who had a great interview in LA Stage Times) perhaps said it best: “watch it and don’t spend too much time trying to figure it out.  Just let it wash over you, concentrating on each object to the next.  Have a good time and think about it later.”

The madness of the production was under the firm directoral (and choreographical) hand of Bill Castellino, assisted directorially by Amanda Rountree/FB and choreographically by Camden Gonzales (FB). They somehow keep the craziness in check, make the characters seem realistic yet absurd, and provide great movement.

This is truly an ensemble piece, with only Alan Abelew* playing a single character throughout. All of the ensemble was great — let me highlight something about each member (I’ve already discussed Abelew). Andrew Abelson* (FB) gave a standout performance in The Killer and in the song Madeline. Joey D’Auria* (FB), a former Bozo-the-clown in Chicago was excellent throughout, but particularly so in Bobby Watson, The Cooking Lesson, in the song Josette, as one of the negotiators in The Peace Conference, and Frenzy for Two. Cristina Gerla (FB), whose performance just drew my eye to her throughout, was spectacular in Ginger Wildcat, Surprising People, and the Mother Peep number [I have this strong feeling that Gerla is either the daughter, or more likely grand-daughter, of my MS Thesis advisor at UCLA, Dr. Mario Gerla]. Kelly Lester* (FB) was great as the Prima Ballerina, Mother Peep, and numerous other roles. Tom Lowe (FB) was strong in Everyone Is Like Me and numerous other roles. Lastly, Jennifer Malenke* (FB) was strong as the Bald Soprano and in other roles.

The production was under the musical direction of Gerald Sternbach (FB), who also was wonderful at the piano. Assisting him on-stage were Hayan Charlston (FB) playing the reeds and Tina Curtis playing all sorts of percussion. They were just a hoot to listen to (and I really wish there was a recording of them doing this show).

Technically, the production was simple. The set by David Potts was simple: angled boxes and abstract clouds. This fit the absurdist nature of the piece. This was augmented by the wonderful props of Katherine S. Hunt (FB), which helped to bring the piece to light. Lighting was by Jeremy Pivnick (FB) and was both effective and creative. Similarly effective and creative were the costumes of Mylette Nora, especially in numbers such as Bobby Watson, Mother Peep, and … hell… the entire things was creatively costumed. The sound design was by Joe Behm/FB and Josie Griffin-Roosth (who also served as the stage manager). Ionescopade was produced by Ron Sossi (FB).

Ionescopade continues at the Odyssey Theatre Ensemble through August 11. It is well worth seeing. Tickets are available through the Odyssey Box Office or through Goldstar Events.

Upcoming Theatre and Concerts:  Next weekend sees us back in Newhall for “9 to 5 – The Musical” at REP East (FB) on July 14. The following weekend is open for my wife’s birthday, and the end of July brings “Legally Blonde – The Musical” at Cabrillo Music Theatre (FB) and (hopefully)  OperaWorks at CSUN (FB). August starts with Nine at DOMA Theatre Ensemble (FB), but otherwise is currently completely open due to vacation planning, although we may see a show at the Lawrence Welk Resort in Escondido at the end of the month (depending on price), or at another venue in San Diego. September may bring Sarah Ruhl’s “In The Next Room or The Vibrator Play“ at the Production Company/Secret Rose (FB) and “Blue Man Group” at the Hollywood Bowl, as well as “God of Carnage” at REP East (FB) at the end of the month (September 28). October is mostly open, but should bring the Cabrillo Music Theatre (FB) production of “Kiss Me Kate” at the end of the month (October 26). November will start (hopefully) with “Dirty Rotten Scoundrels” at Actors Rep of Simi (FB), as well as ARTS’s Nottingham Village (FB) (a one-weekend ren-faire-ish market — tickets are now on sale). November will conclude with “Play It Again Sam” at REP East (FB) at the end of the month (November 23).  The fall should also bring a production of “Carrie – The Musical” (FB) by Transfer Theatre, but the specific dates have not been announced. We also still haven’t heard anything as to whether the Colony Theatre (FB) will have a 2013-2014 season. As always, I’m keeping my eyes open as the various theatres start making their 2013/2014 season announcements. Lastly, what few dates we do have open may be filled by productions I see on Goldstar, LA Stage Tix, Plays411, or discussed in the various LA Stage Blogs I read (I particularly recommend Musicals in LA and LA Stage Times).