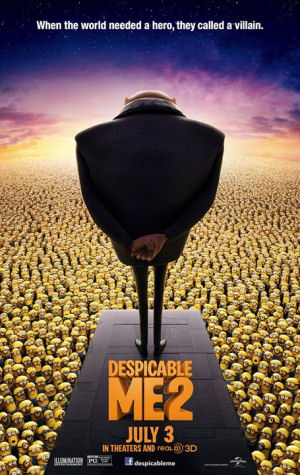 In the theatre, especially for musicals, sequels never work. I can count on one hand the number of sequels that have been produced for the stage, and I can’t think of one that has actually been successful. Perhaps this is because the original production was written as a one-off, and any sequel is an after-the-fact attempt to expand in the same universe and replicate the success. In other mediums, it is very different. Books often have series set in the same universe, and some stories are so long that they require multiple books to sell. In the early days of movies (read the 1930s through 1950s), movies had fewer sequels, but there were series and serials that told episodic stories. But starting in the 1960s and 1970s, sequels hit the movies, and suddenly movies with explicit number in their names started showing up.

Today, any production company worth their salt loves sequels, especially those that turn into successful franchises that they can mine again and again. This means that when a movie is made that takes off, the studios look to see if a sequel is possible. Sometime it can’t be done, but the studio makes it anyway (usually to disasterous financial results). Sometimes it can be done, but the followon effort is mediocre at best (this has happened with many Pixar films — Toy Story being the exception — most recently Monsters University). There are a few times that the sequel is actually stronger than the original — Toy Story 3 being a great example of that.

Back in 2010, Universal Studios distributed the Illumination Entertainment movie Despicable Me. This movie was a financial success, and provided not only a series for Illumination, but an animation success associated with Universal. Naturally, work was started on a sequel, which was released Wednesday.

Now to the reason I’m writing on this. My wife and I discovered Despicable Me when it was shown on the cable pay channels, and we enjoyed it quite a bit. Knowing that my wife enjoys movies like this, and needing to get out of a house filled with teenagers after a July 4th party, we went out to see it yesterday afternoon (our first movie of the year). So I thought I would share my thoughts with you on whether this is a sequel that works. I’ll note that the LA Times had a nice article on the sequel debate.

First, I’ll note that DM2 seems to be a marketing bonanza. Illumination discovered with the first that they had a success with the comic “minion” sidekicks, and they amped them up in the second movie. This reminds me of Gremlins — you know there would be plush toys galore, of both the good and bad variants. Yes, bad minions, created by feeding them water after midnight, are in DM2. Well, the water after midnight part isn’t true, but the minions — both good and bad — are part of the story.

Second, I’ll note that animation in DM2 was excellent. I’m not talking now about the main character animation — which is great — but the little things. What caught my eye was the texture of all the clothing. Although there was no need for the detail, you could see the weaving of the fabric and watch it move. That’s attention to detail from the animation team, and it then carried forward throughout the movie — to the little details in the background of the mall, to the people behind the leads in the scenes, to the animation of the minions, and to the animations of the main characters themselves. It is worth watching the movie multiple times to see these details .

Oh, the story. The story itself was surprising. After all, in the original movie the lead character was transformed from a villain who wanted nothing to do with children, to a father with three adopted girls who had given up villainy. The sequel picks up on this: the lead, Gru (voice by Steve Carrell) is enjoying fatherhood — organizing birthday parties for his girls, taking care of them — while trying to get a legitimate business making jellies started (aided by his evil lead scientist as chief cook). But that is not a story. What make the story is conflict — in this case, an evil villain who has stolen a formula that can turn sweet-and-cuddly-things into evil-things-of-destruction. The Anti-Villains League needs to stop him, and so they send agent Lucy to recruit Gru because he understands how the criminal mind works.

I think you can see where the story is going, and can probably guess what some of the sweet-and-cuddly-things that are turned into destroying monsters. Hint, it’s not the adopted girls. In my mind, this storyline is just for marketing purposes. What makes the story work — and what makes the movie successful — is the underlying story: Gru as father to the girls, and the girls trying to find a wife for Gru so that they have a mother.

In any case, you can now guess what happens in the substory: Gru falls not for all the different women he is set up with, but for Lucy, the semi-competent and cute female anti-villain. This is what drives the story on, and what makes the story ultimately work. There are also other family aspects, such as Gru facing the notion that his oldest daughter is interested in … boys. That subplot is played more for comic effect than anything else.

I’d expect to see this series continue. After all, the Minion Movie has already been announced. I can also see this setting up an animated Spy Kids variant with Gru, Lucy, and the kids. Of course, the subplot will be the oldest daughter actually falling in love. Of course, until that happens, expect to see yellow minions everywhere. They are so cute and cuddly.

As the movie started, I started to get a headache. I think this is another advantage of the live theatre approach — you’re dealing with things in scale — humans on a stage in real-size, as opposed to images 70′ tall. This is made worse at the multiplex that is essentially a 99 seat theatre with a 1,200 seat theatre-sized stage and actors that are gigantic.

As for the previews… This was a kids movie. Almost all of them were animated movies, with the exception of R.I.P.D.

One last note: DM2 is also showing in 3D, and there are only a few places where you can see the design for 3D. This is most obvious in the credits, which are worth sitting through.

Upcoming Theatre and Concerts:  July starts with a musical we had originally planned for Fathers Day weekend: “Ionescapade” at the Odyssey Theatre Ensemble. That will be followed by “9 to 5 – The Musical” at REP East on July 14, and “Legally Blonde – The Musical” at Cabrillo at the end of the month. July will also (hopefully) see us as OperaWorks at CSUN. August is currently completely open due to vacation planning, although we may see a show at the Lawrence Welk Resort in Escondido at the end of the month (depending on price), or at another venue in San Diego.

Continuing the look ahead: September may bring Sarah Ruhl’s “In The Next Room or The Vibrator Play“ at the Production Company/Secret Rose and “Blue Man Group” at the Hollywood Bowl, as well as “God of Carnage” at REP East. October is open, but should the Cabrillo production of “Kiss Me Kate” somewhere, as well as “Dirty Rotten Scoundrels” at Actors Rep of Simi. November will bring “Play It Again Sam” at REP East as well as ARTS’s Nottingham Village (a one-weekend ren-faire-ish market). The fall should also bring a production of “Carrie – The Musical” by Transfer Theatre. As always, I’m keeping my eyes open as the various theatres start making their 2013/2014 season announcements. Lastly, what few dates we do have open may be filled by productions I see on Goldstar, LA Stage Tix, Plays411, or discussed in the various LA Stage Blogs I read (I particularly recommend Musicals in LA and LA Stage Times).