As I may get a phone interview on this subject, I thought I would share some thought on some recent road related articles. In the first, the Reason Foundation has reported on a survey that California Highways are among the worst in the nation — and have been for more than a decade. In the second, the Gas Tax in California has gone up by 3.5 cents, as a result of a law signed by the Governator a few years ago. More on that in a minute. The two stories are very closely related.

Let’s start by exploring how highways are funded in California. First, it is important to note that not all highways are the same in California. What I’m talking about here are state highways — these are the numbered highways (Interstate, US, or California shield) and related state-owned facilities. They are not city or county highways — those are funded by property taxes, although sometimes Caltrans will fund those highways. Understanding the distinction is critical — often, when people complain about poor roadways, they are conflating all the different highway types (because their tushies can’t distinguish).

Looking at the state highways then… what gave California its great highway system was an act in the 1930s-1940s called Collier-Burns, that created the gas tax and allocated that money to the California Highway Commission to allocate to highway projects. The CHC also allocated matching funding received from the Federal government for Federal Aid highways, such as Interstates. Over time, the CHC morphed into the California Transportation Commission, and funded not only highways, but mass transit projects, air transit projects, and in general projects to keep California moving in general.

All of these projects were funded by the gas tax. In the 1950s and 1960s — when we were building highways — this was great. The gas tax was a large portion of the price of gas, cars were gas-guzzlers, people were driving more, and labor and highway construction was relatively cheap because there weren’t all the environmental studies required or right of way battles. This is when California had great highways.

So what happened since then? People have gotten more efficient cars, and are using less gasoline. This means less income for transportation purposes. Construction has gotten significantly more expensive — labor and supply costs have gone up, as well as legal and study costs. There has also been more budget pressure (resulting in budget cuts), and some highway money has been siphoned off into mass transit, in order to pull people off the roads (a self-defeating task, at least in terms of funding). Lastly, more and more cars don’t use gasoline at all, providing no funding for infrastructure.

Combine this with the fact that population has grown and grown, meaning the roads are taking a greater and greater pounding. Add to that the aging of the roads — most of the freeways are now 50+ years old, with some having roadbed that are even older. Those signs with the reflectorized dots and the streaks — those go back to the 1950s. The newer button copy is 1970s and 1980s. The roads are falling apart, and the money just isn’t there to repair them.

Here’s an image that shows the problem well: 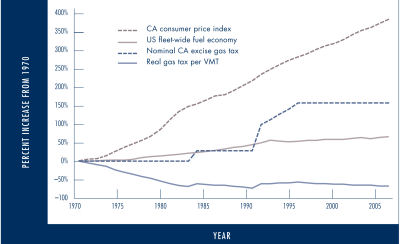 (Image from “Moving Los Angeles” by Paul Sorensen, published in Access by the University of California Transportation Center, 2009)

This is now where the tax increase comes in — which really isn’t a tax increase. What happened is this: Former California Governor Arnold Schwarzenegger in 2010 signed a Fuel Tax Swap law, which makes certain state gas tax revenues remain the same annually. Since gas consumption has been down over the last couple of years, according to lawmakers, the excise tax has to go up to offset the decrease. Excise tax pays for state transportation and highway improvements.

Now, note that this just keeps the funding level (in government speak: level is the new “good”). That will fund existing projects, but means that many roads will wait for years to be fixed if they aren’t critical. Further, none of this addresses the funding issues for state and local roads, which have been coming from sales tax increases (usually more focused on transit) and property taxes. Cities and counties are strapped, and often it is the the highways and public works budget that suffers.

Most people have a lot of trouble putting taxes — especially gax taxes — in perspective. Say you use a tank a week. Call it 20 gallons. At 3.5c/gallon, that’s 70c a week. That’s all of $36.40 per year. That won’t break the bank for most people (plus that’s not per person, that’s per vehicle). This is the same reason it is crazy to run around town to save 5c a gallon. You’ll spend more in gasoline than you will ever save.

In any case, this funding issue is why the roads are in such poor state. Look at the state where the roads are supposedly “good”: North Dakota, Kansas and Wyoming. Most have low populations, small urban areas, and not significant traffic other than trucks on straight-line interstates. Further, they gain lots of gas tax from people driving “through”. Where are the roads worse? Alaska, Rhode Island and Hawaii. The latter two are understandable… they are islands 🙂 . Seriously, Alaska has a lot of area to maintain in very harsh conditions of freezing and thawing. Hawaii has a different problem: volcanic issues and funding problems. As for Rhode Island, I have no idea.

In any case, these are just my thoughts. Hopefully they help you understand why California roads are in such poor shape.