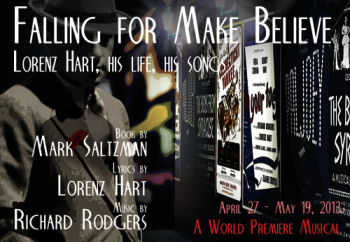 Seeing this, the Colony Theatre in Burbank decided to mount a musical centered around the works of Lorenz Hart. Working with playwright Mark Saltzman, the resulting piece — titled Falling for Make Believe: Lorenz Hart,His Life, His Love, His Songs — premiered on April 27, 2013. We just saw the musical today, at what was supposed to be the last performance (it has been extended — more on that later). As for what I thought about it — that is, was it good or not — is hard to put into a single word or two because there are so many different ways to judge it.

Jukebox musicals have a problem. They can go the easy route and be a simple revue of songs. This is what shows such as Smokey Joe’s Cafe does. That creates an enjoyable evening, but it is ultimately not satisfying. They can create a fake plot around the songs in the existing catalog that weren’t designed for a plot — this can sometimes work (e.g., Mamma Mia), but usually doesn’t. They can also take the hard route and select songs and build a story that tells the story of the person at the heart of the catalog. This is what Ain’t Misbehavin’ did so successfully — each song actually provided insight into the characters and the times.

Falling for Make Believe took this latter approach. It created an artificial character — Fletcher Mecklin — and used him (combined with eulogies at the funeral of Lorenz Hart) to tell the story of Hart. This story was primarily centered around Hart’s drinking and Hart’s homosexuality — how it drove his work, and how it ultimately led to his destruction. Most of the reviews of this show center on this story and its impact — and how it was never really told during the life of Hart. Certainly, the world well knew of Hart’s drinking (in fact, it eventually led Rodgers to dump him as a lyricist for Hammerstein). They didn’t know the other side of his life, as contrasted to other other famous Broadway homosexuals, such as Cole Porter or Noel Coward. In general, this aspect of the story worked. Mecklin served as a good vehicle to discuss how homosexuality was viewed during the time period, and how it affected Porter’s life. It provided a good way to show how Hart’s agent, Doc Bender, enabled the behavior, and how the others in Hart’s circles — Rodgers and his wife, Vivian Ross (their regular leading lady) — reacted to it all.

So where was the problem? First, the songs that were chosen from the catalog did not always amplify the chosen story. Often, the songs were chosen (seemingly) because they were popular and well known, not because they might be construed as making any statement. Further, although the show attempted to present the songs in chronological order, it skipped back and forth and back and forth (a good example of this is Blue Moon, which is seemingly referenced before it was written). It also only highlighted a number of shows.

Right now, this show is only about 90 minutes with no intermission. For the show to move to the next level, I believe it needs to figure out how to present the songs and shows in a chronological order. It needs to figure out how to make the selected songs show how Hart was changing over the years, and perhaps discovering both his homosexuality and his love for alcohol. This may require introducing additional characters, especially to cover the early years. In particular, was his homosexuality affected by the number of years he spent in Hollywood working on film songs. In other words: we need to see Hart’s lyrics present a deeper picture of Hart, not the superficial picture we get with the show.

Note that the above is not meant to imply the show is bad — rather, it is more my thoughts on how to improve the book. As it is now, it is still a very enjoyable one-act with great performances and wonderful Rodgers and Hart music.  The direction by Jim Fall and the Choreography by Lisa Hopkins work well to keep the stage alive and engaging, and to bring out realistic performances from the ensemble. This does take some creativity given the stage constraints of the flyspace-less Colony facility — I can imagine a completely different staging were there set pieces that could fly in and out (such as at the Pasadena Playhouse).

Of course, it doesn’t hurt that the performances were excellent. In the lead positions were Tyler Milliron as Fletcher Mecklin, Brett Ryback as Richard Rodgers, and Ben. D. Goldberg as Lorenz Hart. Milliron had a lovely tenor voice that was just great to listen to. Character-wise… he was a chorus member. In other words, his character served more to move the story along than to have any depth or substance of his own. The main character in the story — Hart — was portrayed by Goldberg. He also had a pleasing voice and captured the drunk Hart well. I’m not sure how well he captured the homosexual Hart, for it is hard to know homosexual behavior that isn’t just a caricature or a stereotype. More problematic is that there wasn’t a strong demonstration of the behavior — other than chronic lateness or drunkenness — that would lead Rodgers to say what he actually said about working with Hart. Hart was more of a nice gay drunk, and I’m not sure that’s how he really was. More problematic was that he had a very similar look to the actor portraying Rodgers, and this occasionally led to some confusion for me. Ryback’s Rodgers was quite enjoyable — nice voice, nice movement, and nice acting.

The second tier of characters consisted of Megan Moran as Peggy/Dorothy Rodgers/Police Woman, Jeffrey Landman as Doc Bender, and Rebecca Ann Johnson as Vivian Blaine. Here I was smitten by the look and performance of Moran — she was a very strong singer and performer. We haven’t seen her before, but I do hope to see more of her. Johnson was also very strong as Blaine with a great singing voice and very good performance skills — especially in her interactions with Goldberg’s Hart. We saw much less of Landman’s character; he only had one song.

The scenic design by Jeff McLaughlin was relatively simple — a number of levels with a piano and a small bar area. Properties and set dressing were by the resident prop-people, MacAndMe. The lighting by Sohail e. Najafi worked well, although there were at times the attempts to focus the lighting through aluminum foil structures created some odd reflections. The sound design by Drew Dalzell provided good sound. The costumes by Dianne K. Graebner were for the most part good, although I was unsure about the first costume for Vivian Ross (I would have expected something a little more risque for a performance in a speakeasy when the actor wanted to show they could do something more daring — especially in the 1920s).

Musical direction was by Keith Harrison, and the 4 piece orchestra (two keyboards, bass, and percussion) was conducted by Kathryn Lounsbery. The production stage manager was Leesa Freed, and the assistant stage manager was Brian Cordoba.

Falling for Make Believe was scheduled to close today, but an extension has been announced. After a two week hiatus, the show will return on June 6 and continue until June 30 (and there was a hint it could continue after that, if demand is sufficient). Tickets are available through the Colony box office, as well as through the usual discount places. As for the next season at the Colony, the official word from Barbara Beckley, Artistic Director, is that they are working on it. Unofficial word is of a more binary nature — it is likely there will be a season, but when it will start, how many shows there will be,  and what those shows are is all unknown. Likely, it all depends on how long this last show extends and the state of the Colony budget. My guess is that the next season, if there is one, will be a recovery season with shows selected to draw in the audience and new subscribers, with sufficient spacing to extend the shows if demand warrants. So we’re still in a “wait and see”, but I’m not going to give up quite yet.

Upcoming Theatre and Concerts:   The last weekend of May brings “To Kill a Mockingbird” at REP East and The Scottsboro Boys” at the Ahmanson Theatre. June brings “Priscilla – Queen of the Desert” at the Pantages, and (tentative) Sweet Charity“ at DOMA (although DOMA may be replacing it with “Nine“). June will also bring a Maria Muldaur concert at McCabes.  I’m also considering Rent at the Hudson Theatres or A Funny Thing Happened On The Way To The Forum at the Hillcrest Center for the Arts in Thousand Oaks. July is currently more open, with “9 to 5 – The Musical” at REP East in the middle of the month, and “Legally Blonde – The Musical” at Cabrillo at the end of the month. August is currently completely open due to vacation planning. I’m also keeping my eyes open as the various theatres start making their 2013 season announcements. Lastly, what few dates we do have open may be filled by productions I see on Goldstar, LA Stage Tix, Plays411, or discussed in the various LA Stage Blogs I read (I particularly recommend Musicals in LA and LA Stage Times).