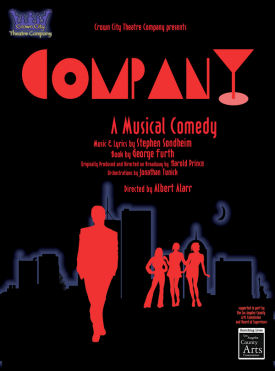 Getting out of your comfort zone. This is something I’ve been discussing with my daughter of late, as she (a History major) has been taking an Astronomy class. This is also something most of us do in life when we get into a relationship and take a leap of faith when we commit to a lifetime relationship when we get married. Getting our of his comfort zone is the question ultimately faced by the lead character, Robert, in that classic Stephen Sondheim / George Furth musical-comedy “Company“, which we saw last night at the Crown City Theatre in North Hollywood. In short, this is an excellent production of the musical, and is well worth going to.

Before I go on, I’d like to note that this is a write-up, it is not a review. I am not a trained theatre critic, and I pay to attend every show I go to, just like most other audience members. I share my opinions on the shows I see with my friends, because I believe the best way to grow live theatre is to spread the word. This is in response to an editorial by Peter Finlayson on Footlights that was in our program, lambasting the “hacks” (untrained critics) who post their opinions about shows in blogs. I’ll have a separate post on that later, but that editorial served to insult this “hack”.

Luckily, the show more than made up for that insult. For those not familiar with it, “Company” is one of those seminal musicals (Sondheim has a lot of those). When it premiered in 1970, it was a flop. Critics and audiences at the time did not appreciate or connect with its music and found its books confusing. The music was Sondheim at his best: a mix of dissonance, clever patter numbers, tender numbers, and exceedingly complex numbers that served to illuminate the characters, as opposed to being an integral part of the plot or moving story forward. George Furth’s book was not necessarily linear, presenting a series of vignettes about marriage and relationships. It also made a point that did not necessarily sit well.

Given this structure for the story, describing it is difficult. “Company” is really the story of Robert (Bobby). Bobby is turning 35, and all of his married friends want him to get married. These friends — Joanne and Larry, Peter and Susan, Harry and Sarah, David and Jenny, and Paul and Amy — all believe that being married is the desirable state, and that by 35 one should be married. As for Bobby… well, he wants to get married, but not really, well he’s unsure. Through a series of scenes we see how Bobby views the marriages of his friends, as well as Bobby’s relationships with the single girls in his life. All of these propel Bobby into a deeper understanding of why he might want to get married, and what marriage really is. Sondheim has indicated this is one of those musicals where he had trouble getting just the right song for the ending, and the one he chose, “Being Alive”, worked well to capture the final point being made.

The director, Albert Alarr (FB), updated the story slightly, incorporating modern communication devices and modern dances. These updates worked very well, especially during the opening where Bobby is simultaneously playing a video game while dealing with email, messages, phone calls, texts, and chats from his married friends. Alarr also did an excellent job in bringing out the characters from the actors — one of the things I was impressed with in this production is how well performed it was. That’s a sign of a director in synergy with his acting ensemble. This was just a well well performed performance.

It was also great to see this musical up-close in a small venue. I’ve begun to realize that many “Broadway” musicals shine when given the small treatment — when the creative energy is used to make the big show up close and personal. I’ve seen this in the under-99 seat version of Gypsy, and it truly shows in this small theatre production of Company. The performances amplify — you get a close-up sense of the people and the couples, and the small space makes the show even more New-York-ish than a large gigantic stage would do.

Let’s now look at the cast and the couples, and in doing so, I’ll highlight two of my favorite performances; the rest I’ll hit as I go through the cast. [* indicates members of Actors Equity or one of the other 4A unions for actors]

In the lead position was Ben Rovner* (FB) as Robert. Rovner’s Robert was comfortable and accessible, and just seemed like the type of person you would like to be around — a good friend always there when you need him. You could see why these couples liked him and wanted him to be what they perceived as happy. Rovner’s signing voice was delightful, shining in numerous numbers such as “Marry Me a Little” and “Being Alive”, and he danced wonderfully.

Moving from the lead to one of the smaller roles, equally impressive was Julia Black*’s Marta. Marta is one of the girlfriends of Bobby, and is the lead singer for  “Another Hundred People”. Black impressed me in two ways. First, she had a wonderfully powerful singing voice that you could hear in the background of a number of songs, and which shone in “Another Hundred People”. Further, she had a wonderfully expressive face that reacted to the story going on around her — again, this was seen in “Another Hundred People”, as well as in the interplay with Peter and Susan, the married couple who divorced but are still living together for the children. She was also a standout in “You Could Drive a Person Crazy”.

In the Broadway original, one of the standouts was Elaine Stritch as Joanne. In the production, Joanne was played by Sonja Alarr* (FB), playing off of her stage husband Larry (Mike Hagiwara* (FB)). Both were excellent. Alarr’s Joanne wasn’t quite as hard and cynical as the original, but came across as a lovely older lady with a sardonic view of life and an incredible capacity for alcohol. Her two main numbers — “The Little Things You Do Together” and the “Ladies Who Lunch” were just great. Hagiwara was one of the best male performers on the stage, with a great voice and wonderful movement.

During Joanne’s first number, we meet the couple of Harry (James Calvert* (FB)) and Sarah (Libby Baker* (FB)). The two worked well together, and Baker had a very lovely singing voice.

The couple of Amy and Paul were portrayed by Amy Albert* (FB) and Christopher Davis Carlisle* (FB). Albert’s Amy was spectacular, and I was blown away by her comic timing, expressions, and vocal capacity during “Not Getting Married”. Carlisle shown less in the singing and more in the reactions during the same number.

Peter (Zeffin Quinn Hollis* (FB)) and Susan (Lena Gwendolyn Hill* (FB)) were mentioned earlier — they are a married couple who decided the best way to preserve their relationship was divorce.  I was unsure about Hill’s Southern portrayal at the beginning, but it ended up working quite well and both performers were fun to watch.

The last couple is David (Jon Hand* (FB)) and Jenny (Beatrice Crosbie* (FB)). Both were a delight to watch, especially in the pot scene where seeing Jenny high was a treat.

Rounding out the cast were Robert’s other two girlfriends — and the remaining parts of the trio for “You Could Drive a Person Crazy”. April, the flight attendant, was played by Emma Degerstedt* (FB). She was spectacular in “Barcelona” and “Drive a Person Crazy”, with a delightful look and wonderful comic timing. The other remaining girlfriend was Kathy (Katy O’Donnell* (FB)).

As I indicated at the beginning, the entire cast was fun to watch, and the large number of people conveyed the New York feel quite well. Also working well was the set design by Jack Forrestel (FB), which integrated well with the props from Joanne McGee (FB) and the projections by Zeffin Quinn Hollis*(FB) to turn the long black-box Crown City space into an effective New York apartment. It is this creativity that shows small theatre at its best — these things are easy to do when you have lots of fly and wing space, but when you are limited and you make it work it is just remarkable. The lighting design by Anna Cecelia Martin worked well to convey the mood, and the sound design by Mark Duggar/FB worked well to provide that ambient noise of New York well. The costumes by Tanya Apuya (FB) worked very well, especially the lovely outfits for all the female characters.  Serving as music director (and on the piano) was William A. Reilly/FB, and the delightful choreography was by John Todd/FB. Gary Lamb/FB was the Technical Director, and Kimberly Bullock/FB was the production stage manager.

“Company” continues at Crown City Theatre at least through the end of March. Tickets are available through Brown Paper Tickets, and note that shows seem to be selling out.

Upcoming Theatre and Concerts:   Next weekend takes us to the Pantages and Hollywood for  “Catch Me If You Can”on March 16. The fourth week of March brings “Boeing Boeing” at REP East on March 23, and March ends with “End of the Rainbow” at the Ahmanson on March 30. April has less theatre — so far, only one show is scheduled. The first weekend of April is open. The next weekend brings with the Southern California Renaissance Faire.  Following that is “Grease” at Cabrillo Music Theatre, and April concludes with a winetasting at Temple Ahavat Shalom. May is busy in a different sense, with two concerts — Elton John in Las Vegas on May 4, and (tentative) Michael Feinstein at VPAC on May 11. May also brings “Falling for Make Believe” at The Colony Theatre and “To Kill a Mockingbird” at REP East. Lastly, continuing the look ahead, June will bring (tenative) “The Scottsboro Boys” at the Ahmanson Theatre, “Priscilla – Queen of the Desert” at the Pantages, and (tentative) Sweet Charity“ at DOMA. We were originally planning on the Western Corps Connection at the end of the month, but their collection of corps this year is poor. I’m also keeping my eyes open as the various theatres start making their 2013 season announcements. Lastly, what few dates we do have open may be filled by productions I see on Goldstar, LA Stage Tix, Plays411, or discussed in the various LA Stage Blogs I read (I particularly recommend Musicals in LA and LA Stage Times).