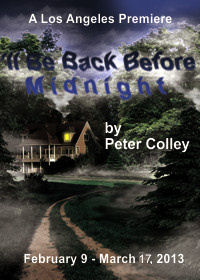 Somethings are easy to do in the theatre: musicals, comedy, drama, and even mysteries. Somethings are a lot harder to do, and to do right. Thrillers are one such genre. Thrillers are different than mysteries: thrillers need to make you jump in your seat occasionally, and that element of surprise is hard to achieve with live actors. Luckily, the current comedy/thriller “I’ll Be Back Before Midnight” at the Colony Theatre in Burbank does it, and does it well. How do we know this? We saw it last night.

“I’ll Be Back Before Midnight“, written by Peter Colley, takes place in an old isolated farmhouse (where else would such a story take place… c’mon). The setup is as follows: Greg Sanderson, a PhD student studying stone tools, has rented a farmhouse near an isolated quarry where he is doing field research with his father-in-law. He bring his wife, Jan, to the farmhouse for some rest — and to rejuvenate their relationship, after Jan has been released from the hospital after a massive depressive incident. This incident occurred after Greg’s mother died, and Laura, Greg’s sister, returned into Greg’s life. Unbeknowst to Jan, Greg has also invited Laura to the farmhouse; this is a problem as Jan has an intense hatred and distrust of Laura. The last element in this mix is George Willowby, from whom Jan has rented the house. Shortly after Jan and Greg arrive, George comes over to check on the house… and tells Jan of the history of the house. This includes the fact that he bought the house for his son, who never lived there choosing instead to go live in the city. He also indicates the house is haunted, dating back to when a young bride was murdered in the living room by a crazed deformed man who broke in through a window. Since then, there are ghostly heartbeats heard when the crazed man is about, and blood seeps up from the floorboards whenever a murder has been committed. But Jan doesn’t need to worry; he’s provided them with a loaded shotgun.

There. You have all the ingredients you need. A haunted farmhouse. Ghosts, murders, and isolation. A nervous wife. A hated sister. A man in the middle. A jolly old neighbor to provide the needed exposition, and a little comic relief. Mix and stir well, and add some darkness to the mix. You end up with a delightful thriller….

….which I must add was well executed by the Colony Theatre. This is the type of piece that the Colony does very well — a character-driven piece that their scenic designer can have fun with. They can establish the atmosphere, pick great actors, provide good direction, and the result is wonderous (as evidenced by the fact that the run has been extended). In this case, the direction is so good because it is being done by someone who knows the piece very very well — because he wrote it. Under the direction of Peter Colley and David Rose, the suspense is maintained well and surprises are not telegraphed. The characters seem realistic (well, I’m not sure the farmer would drink that much). It all works very well.

The acting team is also very talented. As the mentally-nervous wife, Jan, Joanna Strapp does a great job of conveying the tenuous stability of her mental state, combined with coolness and cleverness. She is just fun to watch. Playing off her is Tyler Pierce as her husband, Greg. Pierce, as Greg, portrays the man trying to please two masters quite well: he seemingly wants his wife to recover and have their marriage be what it once was, but he also seemingly wants to maintain a strong relationship with his sister, Laura. Laura was played by Kate Maher, who does a very good job of portraying (to be blunt) a controlling bitch of a sister who does not believe her brother’s wife is good enough for him. The last actor in the mix is Ron Orbach, playing the farmer next door, George Willowby. We last saw Orbach many many years ago (in the late 1980s) at the Pasadena Playhouse; it was great to see him again. Orbach brought the humor to the ensemble wonderfully, and provided some surprising aspects near the end of the story.
[All actors are members of Actors Equity]

Turning to the technical side: Stephen Gifford‘s scenic design was excellent as always: he recreated a wonderfully rustic farmhouse on the Colony stage, assisted with properties from Colony regular MacAndME. My only problem with the design is that there were too many rock tools around if this was a new rental by Greg. Lighting was by Colony regular Luke Moyer, and it did a great job of establishing the mood. The sound, by Drew Dalzell, was very effective, although the pre-show and intermission sounds were a little loud.  The costumes by Dianne K. Graebner worked well. Leesa Freed served as the Production Stage Manager.

“I’ll Be Back Before Midnight” was supposed to close tonight, but it has been extended through March 17. Go see it, you’ll be at the edge of your seats while having a blast. Tickets are available through the Colony website. The Colony also reported that they have sufficient funds to mount their next production, “Falling for Make Believe“ , a musical building on the songbook of Lorenz Hart and Richard Rodgers. This runs April 24 – May 19, 2013, and you can also buy tickets through the Colony website. Alas, the Colony has not yet been able to commit to the 2013-2014 season. I’ve suggested that they do a Kickstarter, but they seem to prefer older fundraising models. Let’s hope they make it.

Upcoming Theatre and Concerts:   Next weekend sees us in North Hollywood for “Company” at the Crown City Theatre. The third week of March takes us to the Pantages and Hollywood for  “Catch Me If You Can”on March 16. The fourth week of March brings “Boeing Boeing” at REP East on March 23, and ends with “End of the Rainbow” at the Ahmanson on March 30. April has less theatre — so far, only one show is scheduled. The first weekend of April is open. The next weekend brings with the Southern California Renaissance Faire.  Following that is “Grease” at Cabrillo Music Theatre, and April concludes with a winetasting at Temple Ahavat Shalom. May is busy in a different sense, with two concerts — Elton John in Las Vegas on May 4, and (tentative) Michael Feinstein at VPAC on May 11. May also brings “Falling for Make Believe” at The Colony Theatre and “To Kill a Mockingbird” at REP East. Lastly, continuing the look ahead, June will bring (tenative) “The Scottsboro Boys” at the Ahmanson Theatre, “Priscilla – Queen of the Desert” at the Pantages, and (tentative) Sweet Charity“ at DOMA. We were originally planning on the Western Corps Connection at the end of the month, but their collection of corps this year is poor. I’m also keeping my eyes open as the various theatres start making their 2013 season announcements. Lastly, what few dates we do have open may be filled by productions I see on Goldstar, LA Stage Tix, Plays411, or discussed in the various LA Stage Blogs I read (I particularly recommend Musicals in LA and LA Stage Times).

Music: Country — After All These Years (Chet Atkins): “I Can Hear Kentucky Calling Me”